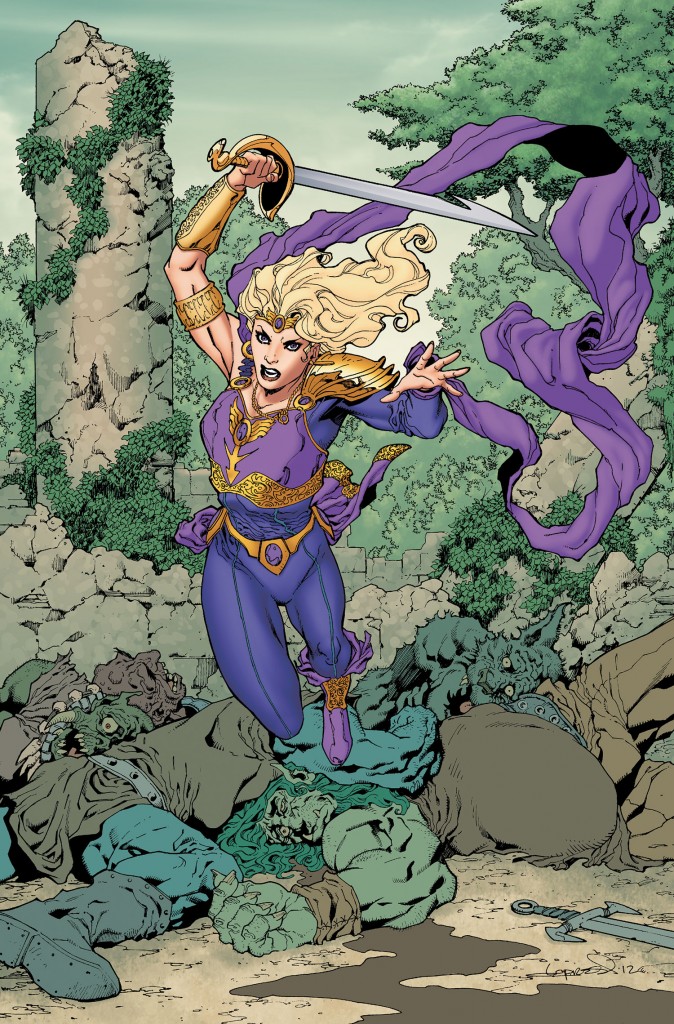 Sword of Sorcery is a much different series than my other DC titles. It involves a lot of fantasy and requires me to go a little out of my comic-reading comfort zone. If asked, I’m not sure I can pinpoint why it is different from my other books. No doubt there’s a youthful feeling to the Amethyst story that is removed from many of the other main DC titles.

The first issue certainly doesn’t feel like a traditional first issue. The story picks up right after the zero issue, which kicks off Amy’s initiation into Gem World. If you don’t read the zero issue, you may be slightly confused by the actions. Amy and her mother were ambushed at the end of the zero issue and now must fight for their lives. Amy is understandably confused by, well, everything. She looks different, the people are speaking a foreign language, and she is being attacked. While the writing isn’t deep and heavy with self-exploration at this point, you get a feel for Amy’s confusion and panic. She’s 17 and suddenly thrown into a completely different role. The themes are generally kept light, making it accessible for a wide audience.

Lady Mordiel, Amy’s aunt, is on the hunt for Amy and her mother. Mordiel is out to protect her position as queen of the House Amethyst, which is threatened by the reappearance of these royal members. As a reader who is not familiar with Gem World, I am not exactly sure what is at stake. This issue introduces us to other houses, such as the Citrine and Diamond houses. What power and influence comes from ruling one house when there are other families with varying degrees of importance? Why does Mordiel need to hang on to this position?

The Beowulf story continues to confuse me. I know it’s a different take on the classic tale, but I’m not interested. There’s an odd mechanical/old world mash-up that doesn’t fit in with anything. It doesn’t seem rational to me, and it certainly does not complement the Amethyst story. I debated on reading the Beowulf story this month, and I probably won’t next month.

Surprisingly, the first issue of Sword of Sorcery may not be a great jumping-on point, especially if you like to know the whole story. Fret not, because you can still get most of the story from this one issue. The zero issue provides a wealth of information on the characters and the situation, but nothing that can’t be explored in later issues. I could take or leave the Beowulf story.