Story and Art by Junya Inoue

Video games are a great medium to escape into. The popularity of violent, multiplayer games sheds some light on just how far we like to escape. From the safety of our homes, we can engage in actions we think we can never perform.

Ryouta is one such person. A avid player of BTOOOM!, he is ranked worldwide. But his life is turned upside down when he follows a child into the Sanctuary, where BTOOOM! is played out in real life. With his presence, a series of murders occur between the players. Even worse, Ryouta is trapped in the world of BTOOOM!. Suddenly, the thrill of the game is not as fun as it was. 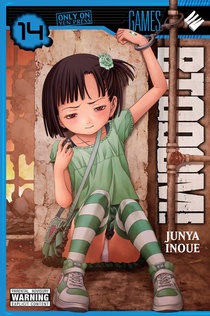 With several players already dead, it is up to Ryouta to suss out who is causing the deaths. Torio, who he thought was dead, is herding the remaining players in order to kill them off. He constantly films the madness, hoping to turn the raw footage into a documentary of his brilliance in the game. However, Ryouta has an ace up his sleeve: Kaguya, the figurehead of a religious cult who is more than meets the eye. Their combined forces bring unpredictability to Torio’s plans, and Torio scrambles to adjust his killing spree.

The artwork of BTOOOM! is traditionally laid out, with straightforward panel progression intermingled with splash pages. Though the panel layout is not particularly innovative, each panel is filled with incredible detail. Some of the most intricate panels include closeups of BIMs and buildings being destroyed. Torio’s escape route, depicted as a chessboard on panel, reminds readers of the gaming nature of BTOOOM! and the logical mind of Torio. The dark tones of the manga help add depth to each page and convey the gruesome nature of the story itself.

BTOOOM! manga is published by Yen Press and rated mature for language, nudity, and violence. There are currently 14 volumes in the series, the most recent one published July 26th of 2016. A 12-episode anime is on Crunchyroll and covers the first 50 chapters of the manga series.

It is really difficult to jump into a series like BTOOOM! because of the number of chapters published. If you are interested in the story, it is worth watching the anime or grabbing the previous volumes to catch up. Or, if you want to dive in now, read a quick synopsis of the story thus far and enjoy the bloody, violent ride with volume 14.