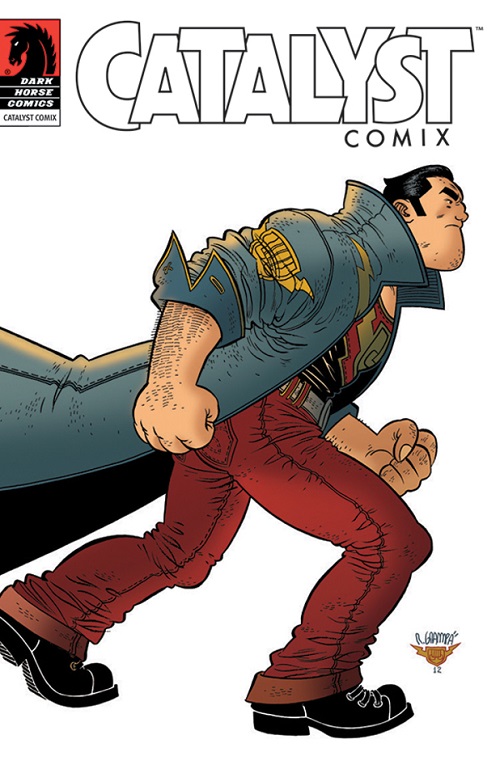 “The Ballad of Frank Wells” Art by Dan McDaid

Catalyst Comix has that anthology feel to it. It’s a collection of three short stories all written by Joe Casey and taking place in the same world. However, each of the stories features a different artist and encapsulates a different tone and aspect of this dystopian world. All three of the stories feature individuals with superhuman abilities, but Catalyst Comix doesn’t read like a traditional superhero comic.

All of the artists in this book provide a very pop art feel to their stories, but each is distinct from the others. Brad Simpson changes up the colors with each story to help set them apart even more. Overall, it felt a little like reading an old 2000AD comic; various styles that maybe aren’t as polished as what we see in more mainstream titles. I read this issue digitally, but had I a print copy, I would have loved to have read this on newsprint paper.

The featured (longer short story) is “The Ballad of Frank Wells.” Casey introduces a hero with tremendous power battling an alien invasion that could bring about the end of the world.  This alone isn’t something special, but it’s the man versus himself aspect that is incorporated that really makes this an intriguing read. Frank Wells doesn’t know if he’s doing the right thing. If he punches the monster into a building people will die. It’s during the battle that he is realizing that his decisions can have catastrophic consequences. It’s something that we often overlook or try to explain away in other stories, but this internal struggle is what really makes the read enjoyable.

“Amazing Grace” and “Agents of Change” were the backups for this issue. Casey states at the end of the issue that each story will be featured for three issues, and then one of the others will rotate in. “Amazing Grace” was a very psychedelic, sci-fi tale of a girl on the edge of space making first contact and rushing back to warn Earth. It was probably my least favorite of the stories (for no particular reason other than I enjoyed the others more), but it was a nice little head f**k.

“Agents of Change” had a street level feel with some Secret Avengers sprinkled in. It was infused with some lighter humor, and was a nice way to wind down the issue after two heavier stories. It’s obvious that these stories are all taking place in the same world, and should be fun to see how Casey weaves three different stories, with such distinct styles and tones, together.

Give it a shot. It’s something totally different than your average superhero book. It’s like a book for people that want to read superheroes, but they don’t want to read about “superheroes.” It’s about 30 pages of comics for $2.99, so you get your money’s worth.