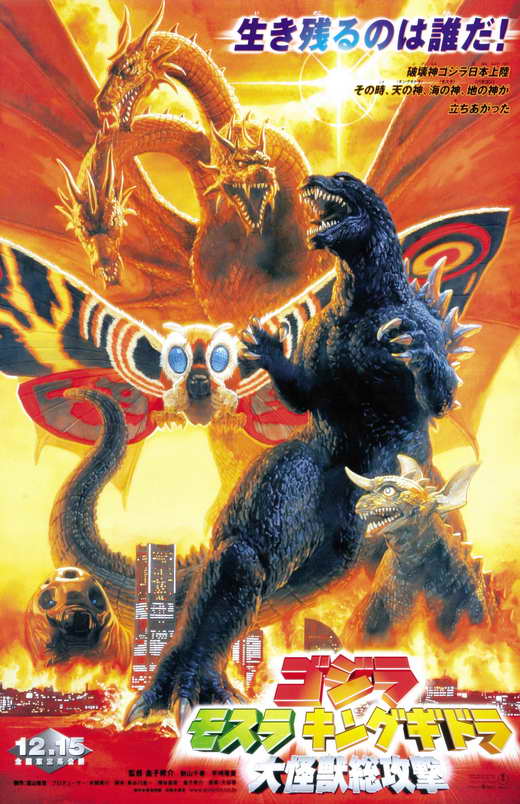 A retro–review by Bob Reyer

With Guillermo del Toro’s Pacific Rim set to invade theatres this week, your Obedient Servant has been on a “Kaiju kick”, and one of the highlights of my viewing (as it always is!),  has been watching the 2001 monster-rally spectacular Godzilla, Mothra, King Ghidorah: Giant Monsters All-Out Attack, which was the 25th Godzilla film released by the Toho Company. Get some popcorn ready, and put Akira Ifukube’s stirring “Godzilla Theme” into your head (or I-Pod, your choice!), and let’s take a monster-sized stomp through this film that might very well be the best in the franchise after the 1954 original Gojira!

“They were making Godzilla movies after that awful Roland Emmerich one?” I can hear some of you saying, but in fact Toho had an entire run of Godzilla films after that debacle, although excepting Godzilla 2000, they were not released to theatres in the States. (By the way, for the cognoscenti, there are three series of films: the Showa,  which goes from the 1954 original through 1975’s Terror of Mechagodzilla; the Heisei, which runs from the 1984 Godzilla Returns to the 1995 Godzilla vs. Destroyah; and the Millenium series that begins with Godzilla 2000 and concluded with 2004’s Godzilla: Final Wars.)

(Robert, you should get back to your review; you do realize that this is a comic book site, and Bobby will be back before you know it, darling! Audrey)

(You’re right as ever Audrey, so back to GMK!)

Writer/Director Shusuke Kaneko envisioned this as a direct sequel to the first film, and posits that the “Big G” hasn’t re-appeared since being driven off or killed at the finale of the original Gojira. (I won’t spoil the joke, but during the opening, there’s a great line about this during a military meeting !) At that meeting led by Admiral Taizo Tachibana (an orphaned survivor of Godzilla’s first attack!), news emerges regarding the scuttling of an American submarine, followed quickly by reports of an earthquake and the sighting of a monster in the vicinity, and then the disappearnce of a group of teenagers, some of whom are found cocooned! (Uh-oh!) The Admiral’s daughter Yuri, a reporter for a reality TV show focused on the paranormal, has come across a mysterious elderly man who warns that Godzilla is about to return, and that three “Guardian Monsters”, Baragon (from “Frankenstein Conquers the World”), Mothra, and the “Thousand-Year Dragon” King Ghidorah, will re-awaken to save Japan from destruction. I’m sure that you good folks can see where this is headed!

Needless to say, Godzilla does return, and in spectacular fashion. The Big G is truly terrifying in this film; dismissive of the human rabble beneath his feet, as well as to the other monsters who dare to mount a challenge, and completely ruthless to the military and their hardware. With all that, director Kaneko brings to light here what was at the heart of the original film, in that despite the focus on the titular creatures and the scenes of destruction (almost to Man of Steel levels!), the film is still about people and their reaction to the disaster. This is most highlighted by the relationship between Admiral Tachibana and his daughter Yuri, in two exceptional performances by a fatherly Ryudo Uzaki and the beauteous and spunky Chiharu Niiyama. For those unfamiliar with these more recent films, the special effects have taken a great leap forwards, and in GMK particularly. Don’t fret, all you traditionalists out there, the monsters are still “men-in-suits”, but today’s miniature work is breathtakingly realistic,  and the camera moves that are now available make for scenarios that were just not possible for original Gojira director Ishiro Honda to put on film. There are “Godzilla-eye” view perspectives of the fleeing populace gazing back in awe-struck terror, and the battle sequences between the various monsters are a visual treat; a ballet with each creature gettting a turn in the spotlight.

Looking past those large moments, there are some great ideas at play in this film regarding familial bonds, cultural history and responsibilty to past actions, and a nod to the samurai’s code. All in all, quite a bit of goings on for a monster movie! It is the combination of all these elements through the outstanding work of writer/director Shusuke Kaneko that lifts this film almost to the franchise’s pinnacle attained by Mr. Honda’s 1954 Gojira and its underlying themes about the atomic bomb and technology run rampant,  and far above the usual in a genre that too often relegates itself to vapidity.

VERDICT:   Those whose impressions of Godzilla are tainted by the later films in the Showa series, where he is sadly either a hero or the comic relief, will find GMK a (radioactive) breath of fresh air! Before seeing Pacific Rim, give a spin to Gojira, Mosura, Kingu Gidora: Daikaiju Sokogeki (the Japanese title!) for a look at an entertaining modern Kaiju flick! You won’t be disappointed!

Sountdtrack (kinda): Check out this fabulous trailer for GMK put together by G-fan Kyle Gilmore: