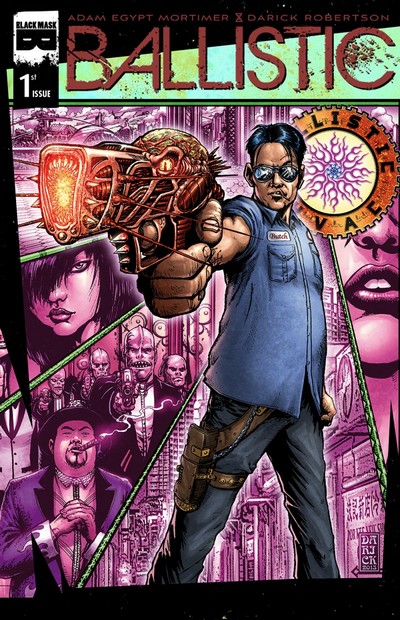 Perhaps you recall a certain futuristic, sci-fi, completely insane series back in the 90’s called Transmetropolitan? The series was written superbly by Warren Ellis and inked in a brilliant, hyper detailed style by an artist named Darick Robertson. The intensity and balls-to-the-wall attitude of that story has not been matched yet in comics, in my opinion, but a new series with artwork by Robertson and writer Adam Egypt Mortimer appears to be taking a stab at something close to it.

Ballistic is the tale of a failed bank robber in a post apocalyptic world where all technology is alive and has an attitude. Butch is an air conditioning repairman with big dreams of the criminal kind and he’s working to get there with the help of his genetically modified and foul-mouthed gun. They call Repo City State, a reclaimed trash island, home and the place provides plenty of opportunity for Butch and Gun to raise hell.

Matt Pizzolo of Black Mask Studios says “Mortimer’s mix of speculative science, pulpy noire, and drug-addled adventure cooks up a strange brew of Lethal Weapon by way of Cronenberg meets Dr. Who if written by Odd Future.” This promises to be an impressive and wild series with tons of talent behind it. I’m very excited to have the chance to review issue #1 on July 10 and I highly recommend you all check this one out. 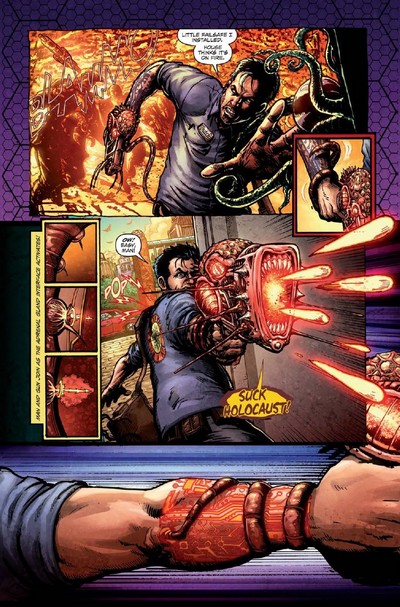 Speaking of exciting new things, you should all be keeping an eye on the new comic book ‘pipeline’, Black Mask Studios, which was born out of the Occupy Comics project. The founders aim to make the company one which will support creators making outsider/transgressive/non-traditional comics. You can see other projects from Black Mask here.