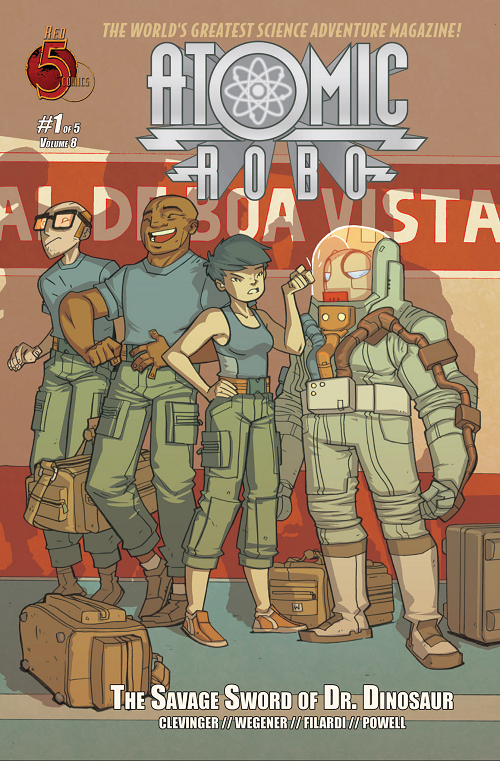 Atomic Robo is one of those series that I love to death. It’s smart, fun, full of charm, and a great read for any age. Atomic Robo is a character that kids and adults can look up to. He reminds us that learning about science is an important part of our education. Science can bring people together, and better our society. If used improperly or misunderstood, it can bring about terrible things as well. Things that Robo and his team of action-scientist usually end up stopping.

Dr. Dinosaur was introduced way back in  the 2009 Free Comic Book Day issue of Atomic Robo (which you can read online for free here). He has since appeared in other free issues and short stories, but he has never been the central villain for an entire volume of Atomic Robo.

Issue #1 of this volume is a pretty heavy setup issue compared to past entries in the series. For some newer readers, this could be a little intimidating, and may lead you to think you have no idea what is going on. However, each volume of the series can be read on its own. The events that are recapped in the opening of the book are new for everyone.

It turns out that Atomic Robo has been declared a terrorist, and is accused of being in possession of stolen nuclear weapons. He is currently on the lam and hiding out in Japan. His tough as nails agent, Jenkins, is currently holding down the day to day operations of Robo’s Tesladyne Industries. What I like is that Clevinger introduced the recapping by poking fun at 24 hour news programming. It was, however, pretty text heavy, but once you get through it, the issue begins to pick up the steam and heads into the adventure science Atomic Robo is known for. The interaction between the characters is the highlight of the issue. Jenkins has always been a favorite of mine, and seeing him in an office situation was a nice change up that provided a few chuckles.

Atomic Robo usually has layered plots, so I can see the need for some of the heavier exposition this issue, but I would have liked to have the seen the pacing picked up a little in this first issue. The last half of the issue brought about some of the familiar humor and charm that the series always brings, and outweighs all the gripes I have about the first half of the issue. In fact, by the end of the issue, my main complaint was, “Damn, I want more Dr. Dinosaur. When’s the next issue?”

The art is the same that is found throughout the other volumes. Wegener’s unique style is fantastic and creates a world that is distinctly Atomic Robo. As soon as you open up the issue, you feel at home with the characters and the energy is buzzing while you wait for the adventure to start.

Buy It. Although The Savage Sword of Dr. Dinosaur is not Atomic Robo’s strongest opening issue, it is still an enjoyable issue that is looking to setup one of the series’ strongest arcs. Dr. Dinosaur is a fan favorite, and his appearance this issue should be enjoyable for new readers as well. If you like action-adventure, Indiana Jones, Dinosaurs, or science, then you should be reading Atomic Robo.

There is a lot of free material you can read to get some exposure to Atomic Robo and his friends at the official AtomicRobo.com webpage. Be sure to check out Dr. Dinosaurs first appearance, “Why Atomic Robo Hates Dr. Dinosaur” here, and another great story in the 2011 Free Comic Book Day issue.