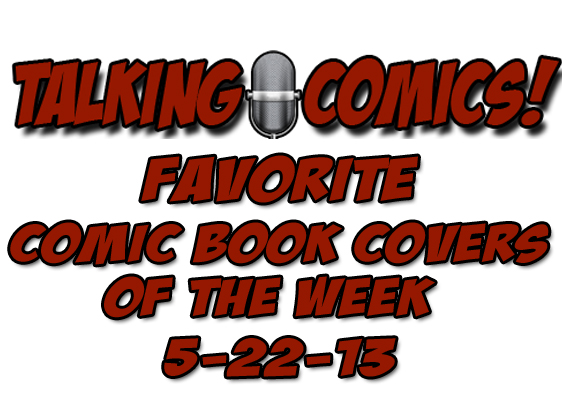 “I’m seriously at a loss for words in regard to much I love this cover. Since the start of the Marvel NOW!  X-Men Legacy run, Mike Del Mundo has treated us to some pretty dazzling covers, but this one might very well be his best yet! Just, wow!” – Steve Seigh “What’s not to love about the chibi-esque art style of these characters? This cover is filled with fun, vibrant colors, and a watercolor-like design that I really enjoy.” – Steve Seigh “I love how dark and sinister this cover is. Above it all though I really just love that hand reaching out toward the reader. Personally, I’ve found the “talons” to be a very cool and defining addition to the Spidey suit since Otto moved into Peter’s skin.” – Steve Seigh “One of my skill sets of the Daredevil character is his pension for acrobatics. This cover shows him moving along a clothesline against the on comings of what I can only assume will be a most beautiful sunset. I approve.” – Steve Seigh

“This cover makes me want to party!” – Steve Seigh “I haven’t liked a single issue of the main line Superman title in the New 52, but this cover made me stand up and take notice. It’s bright, energetic and gives off a sense of fun and if I didn’t know any better I may have bought this book on the image alone.” – Bobby Shortle

“I am not familiar with the work of Joe Corroney, but I will be doing some research!! This is an amazing likeness of Dame Diana Rigg in her “Avenging” hey-day. For those of you who know her solely from Game of Thrones or the recent Neil Gaiman-penned Dr. Who episode, an image such as this might serve as explanation for why Dame Diana has fueled crushes (mine included!) for nearly half-a-century!” – Bob Reyer “The Thing is my absolute favorite comic book character, and this gorgeous cover by Mark Bagley captures perfectly the mixture of heroism and sadness that forms the core of this mainstay of the Marvel Universe. If Susan Storm-Richards is the heart of the Fantastic Four, then Benjamin Jacob Grimm is its backbone, exemplifying through his singular struggle the courage that inspires his team-mates, showing them that no matter the situation, you can always count on the ever-lovin’, blue-eyed Thing!” – Bob Reyer “Revival #10 because it’s half a man with his intestines hanging out, and he’s just not giving up. That’s commitment!” – Melissa Megan “The last issue before the Unwritten Fables storyline is all about Tom getting out of Hell. The cover reminds us of how difficult it will be and gives the impression that all eyes will be on Tom as he confronts the King of Hell.” – Mara Whiteside “Looking like a classic movie poster from the 40s, the cover to Half Past Danger encapsulates the book in one image. Nazis, soldiers, femme fatales, airplanes and dinosaurs, it’s like a dream came true and became a comic. Absolutely gorgeous work from Stephen Mooney.” – Travis McCollum

This list was compiled while listening to the album Sleep Talk by the band Shannon and the Clams.