After covering every issue in the Wrath of the First Lantern crossover from start to finish, it would feel like nothing less than unfinished business if I did not also cover these final chapters in the form of epilogues that each of the supporting titles have brought to round out this long and galaxy-spanning storyline.  So, as the equally talented creative teams of these other books take their final bow, lets do a quick roundup of these issues and see how they say farewell as we move into the new directions next month! 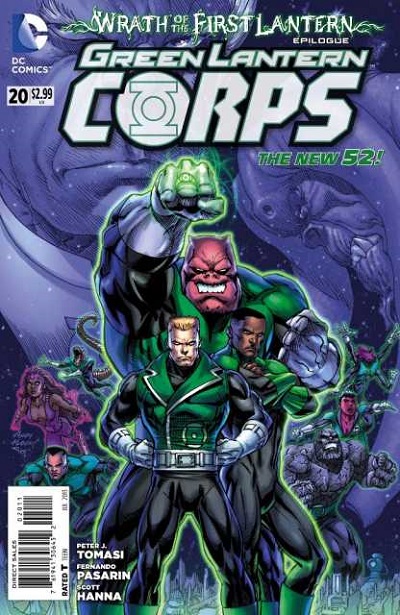 After a bit of a misfire saw the epilogue released two weeks before the actual finale, I was finally able to go back and read through this issue after finishing off the crossover today.  And I am happy that I did wait, because Tomasi and Pasarin take a much more playful approach to their farewell to John Stewart and Guy Gardner; offering them a brief respite after the chaos that preceded it, and even providing a few chuckles along the way.  Read in order, it feels like an entertaining way to pull these two Lanterns out of the galactic level threats that they have found themselves as supporting members in, and focuses back on the individuals who headline the title itself.  Unfortunately, as a fond farewell to these two particular Lanterns, it is a bit light as a singular issue; and does not offer much in the way of story for those looking for huge ramifications coming out of Wrath of the First Lantern.

Not content to put all of the toys back in the toy box after their years long stewardship of the Corps, Tomasi has left his own marks upon the two Lanterns though (as well as the massive Corps itself throughout his tenure) by providing a new status quo for both of them that offer unique directions and possibilities for the oncoming creative team.  New relationships have evolved, and old bonds have been reformed.  Both of which will offer an interesting supporting cast to both John and Guy as we move forward.  Overall, it’s infinitely lighter in tone than the event itself, and provides a nice breather before they are tossed into the new fires that almost certainly await them.

Tossup.  It’s a nice bow on the two lanterns as Tomasi and Pasarin say their goodbyes, and long time fans of the characters will enjoy this final chapter of the creative team.  For those looking for the spillover from Wrath of the First Lantern though, there is not too much to be found in this particular issue for good or ill. 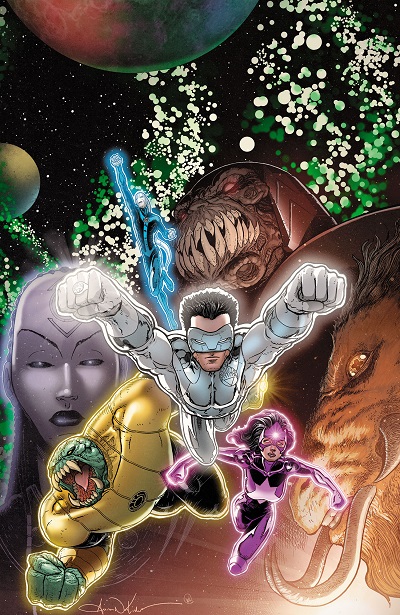 Following the same path as the GLC title, the epilogue to the New Guardians portion of this tale focuses on Kyle Rayner and the aftermath of his new found White Lantern status without a unifying goal to guide him from this point.  With the loss of his unique multi-colored teammates now that the threat that brought them together has been ended, Kyle finds himself alone and rattled by the aftermath of the First Lantern’s meddling.  But with the helpful advice of Saint Walker, perhaps he can sort out his amalgamation of feelings and find a purpose once again.

Bedard actually brings a nice ending of his own for both the expanded cast of characters, but especially for Kyle Rayner himself.  Closing up his own tenure on the title by checking in on all of the past members briefly and allowing them their own alluded epilogues, we also get a brief glimpse of the new motivations that will help guide the White Lantern while tying a bow around the ever-present and unique relationship Kyle had with the Guardian Ganthet.  It reads quite nicely if you have been following the character consistently, and is a more than fitting ‘send off’ as he goes now to the next chapter in his life.  But, while this is great for the long time fan, newer readers may feel the transitory nature of the story more than those who are emotionally invested in the character, as it is a filler issue story-wise to allow Bedard/Guinaldo to say their proper farewells.

If you are a fan of Kyle Rayner, it is a great issue.  Those who are not really invested in the surrogate father relationship he had with Ganthet will probably find the story a bit less compelling, but it is more than just a nice way for the characters to end this particular leg of their journey. 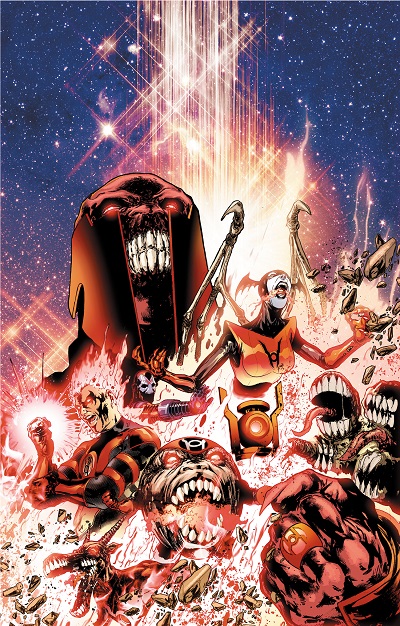 I’ve easily said it twenty times by now, but it really is quite astounding how far these characters have come over Milligan’s tenure on the Red Lanterns title.  Now, with his vengeance temporarily sated, Atrocitus now looks to turn his new dysfunctional family (and I mean REALLY dysfunctional) into a force for good in the universe.  Not all agree on this shift in philosophical direction, and debates ensue about who should lead this ragtag group.  Meanwhile, the Red Lantern of Earth must decide where his loyalties lie; with the rage that his fellow Lanterns want to focus towards the task at hand, or with his humanity that pleads for reason.

These are the same characters who at the start could only spew blood and say ‘GRAARRRRGLLLARRRWWAARRRRR’ as conversation that are now debating the moral implications and self-replicating cycle of violence that possibly harnessing their powers for the greater good could cause.  Even more impressive, the transition occurred gradually, naturally, and almost imperceptibly as the story reached the end of this chapter; so I tip my hat to Milligan for his astounding efforts in this arena.  Unfortunately, while the steady pacing of the series as a whole has been commendable, this final issue does have some issues in trying to push too much closure on open threads in a rushed manner.  It is sad to see the strongest point of the book be the weakest link of the final issue, but it is more than understandable given the circumstances surrounding its release.  This combined with the almost convenient manner in which some of these threads end to fit into the alloted space, detract from an overall enjoyable issue if you have been following it to date.

Another toss-up pending entirely on your attachment to the characters.  The issue does suffer from attempting to tie up loose ends in a hurried manner after all of its mandated crossover pieces sidetracked the story for so long, but does a commendable job in placing the capstone on the transformation of the red-headed stepchildren (pun intended) of the Lantern family of titles.

As a final note in this endeavor, I know I gushed quite positively about what Geoff Johns has brought to the Green Lantern family of titles during his time behind the creative wheel in my earlier review of Green Lantern #20; but the same can easily be said for all of the creative teams on these books throughout the years.  I commend each and every one of them for adding integral parts to the tapestry as a whole that not only told amazing stories in their own rights, but also elevated each other through their tight comradery that helped to turn this interwoven corner of the DCU into the powerhouse treasure trove that impacted the industry entirely and provided legendary tales.  Kudos to you all, and a sincere thank you for all of your hard work over the years to define the Green Lantern mythos to myself and countless others.