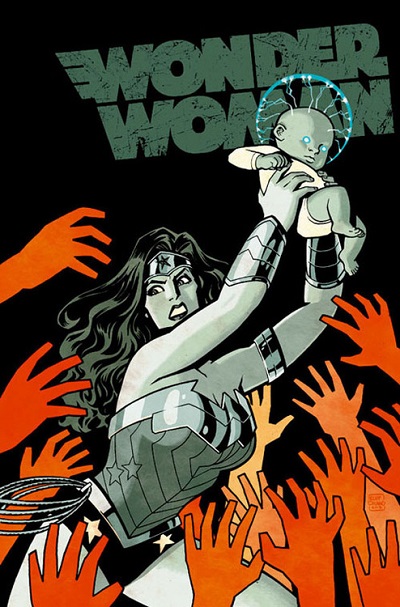 It’s always difficult to do a review of a title that has just been so consistently good, that there seems to be little left to say.  That is the situation I find myself in this week, reviewing Azzarello and Chang’s twentieth issue of their epic Wonder Woman run.  And while it may be polarizing for some fans, for readers like myself it has maintained a gripping plot, an unrivaled supporting cast, and features artwork that has captured the look and feel of the story almost perfectly.  With that said, let’s dive into Wonder Woman #20 to see if it holds to its ways.

Peace can never last long when squabbling gods and demigods are about, and Wonder Woman and her family find that out the hard way this issue.  As Apollo and Poseidon battle with words atop the refurbished halls of Mount Olympus, Artemis hunts for conflict herself by following the orders of her brother to snuff out the child foretold in the prophecy (while also seeking a rematch against Diana from their last conflict).  But even as these larger than life threats loom, their biggest adversary finally makes his presence known; seeking to claim the child for his own and find retribution for the wrongs these so-called gods had inflicted upon him.  Can Wonder Woman defeat Artemis without the tricks she needed last time to win?  And can her friends keep the baby Zeke safe as they face a threat that even makes the gods themselves tremble?

I’m elated to say the title is still going strong with all of the positive traits I listed in the opening paragraph.  As such, there is still another item on the list not mentioned that this particular issue brings to light, and that is the grandeur of scope.  What started as the smaller tale of Wonder Woman trying to defend a young lady from the schemes of a jealous Hera has blossomed over the last twenty issues into a massive epic utilizing practically the entire Greek pantheon.  Betrayal on a scale both large and personal, New Gods joining into the fray, and now past histories of these ancient beings coming back to bite them in the rear all adorn each progressive chapter like an ancient tragedy.  But more astounding, the small personable cast are not lost in this sea of interweaving plot.  A feat that is difficult to do, but is assisted with immensely by the artwork provided by Chiang.

Maintaining his stylized cartoonish approach, Chiang injects that personable feeling to each member of the cast by focusing so much attention to the emotions of the eyes.  So while Azzarello’s scripting and dialogue continues in its sharp style, the artwork provides a subtle counterpoint to the words; offering up the conflicted feelings behind those words.  As the action and intrigue occur in the foreground, entire scenes play out in the background without a word stated.  A look of concern from someone who has shown nothing but contempt, false bravado to hide fear for themselves and others, and haughty arrogance where none is warranted.  All of this occurs in the background, and gives the twisting story the grounded approach needed to make people care about the characters themselves without drawing focus away from the intricate plot.

A shock to anyone who read the above, but I stick with a strong buy for this issue of Wonder Woman.  Continuing its ever-escalating storyline without losing the grounding needed for emotional resonance, this issue is another check mark in the positive column for what has been such a strong run in my opinion.  While others may not share that sentiment based on the reinterpretations done in this new volume, divorcing this character from her past would still leave a strong story well worth reading.