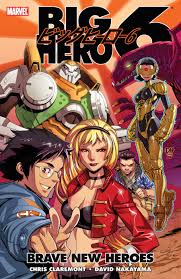 When Disney first acquired Marvel and announced that they intended to develop an animated feature based upon a previously existing Marvel property, speculation ran amok. Which characters would the venerable, tentacular company select to star in its first family-friendly animated superhero endeavor*? Power Pack? Cloak and Dagger? Runaways? New Warriors? The possibilities were almost endless.

A manga-influenced superteam comprised of characters such as science prodigy Hiro Hamada, a shape-shifting robot named BayMax, and Honey Lemon, a secret agent with a “Power Purse” that appears to operate on the same basic principles as Captain Caveman’s body hair, BIG HERO 6 is pretty much the last title that anyone would have expected to be the stars of Disney’s first Marvel animated film, but it’s actually an arguably brilliant and inspired move by the House of Mouse. The title combines both superheroes (traditionally and over-generally a “boy” thing) and Manga (extremely popular with girls)**, creating a potential crossover demographic that’s sure to please Disney’s shareholder overlords. Adapting Big Hero 6 also gives Disney a certain amount of leeway to do whatever they want with these relatively unknown characters, developing them apart from their highly successful live-action superhero franchises.

The footage that’s available shows absolutely nothing of the characters, instead focusing on the invented world of “San Fransokyo.” It’s impossible to get a read on whether the film will be a good one by viewing this footage, but it sure does look purty. Big Hero 6 will fly onto the silver screen November 7, 2014. It’ll be in 3D, because of course it will.

*This is technically accurate – The Incredibles is a Pixar production, while Big Hero 6 is being produced directly by Disney.

**Note: Some girls love superheroes, and some boys love Manga, but this essential divide does in fact exist, at least according to publishers/marketers. No sexism is intended in this statement.