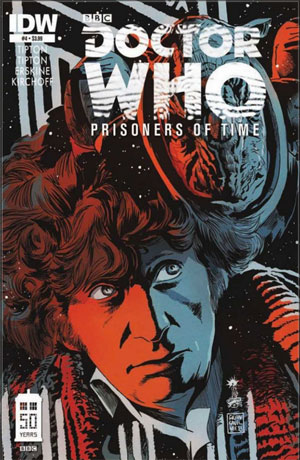 Doctor Who Prisoners of Time #4

Story by Scott and David Tipton

In the fourth installment of the year-long Doctor Who comic event, Tipton and Tipton bring one of the most iconic Doctors to the page: the beloved Fourth Doctor. With him comes the endearing K-9 and fierce Leela.

The story starts out innocently enough. The Doctor, out of boredom and hunger, decides to visit Agratis, a planet known for tourism and delicious food. As with any story featuring the Doctor, nothing goes according to plan. Once the Doctor, Leela, and K-9 arrive on the planet, they find themselves in a race against the legalistic Judoon as they tear Agratis apart looking for a jewel thief.

The issue reads like a condensed episode of the television show. It starts with curiosity and exploration, hits a conflict, explores possibilities, and wraps everything up with a little lesson in being a better person. The speed with which Tipton and Tipton tell this story is truly a skill they use to its full potential.

One thing that sets this issue apart from the previous two is the brief appearance of the hooded figure set on collecting the companions. We know the drill by this issue: in a moment of confusion, the Doctor’s companions will suddenly disappear without warning. In this case, the Doctor comes face-to-face with the illusive enemy. Even though we see him again, the readers and the Doctor are left with no answers as to why the companions are being collected.

Doctor Who: Prisoners of Time is a fun series for fans. It is a chance to reminisce about the past of this long-running series and learn about the quirks of each of the Doctors. One of the greatest things about this miniseries is that each issue can stand by itself. Within the first few panels, you get all the information you need to enjoy the story. You can pick and choose which Doctor’s to buy or buy all 12 issues of the series. Either way, you’re in for a treat.