A few days ago, we celebrated the Man of Steel’s 75th anniversary and to commemorate that historic day let’s go back in time ten years ago to reminisce on a Superman project that never came to be. The year was 2003, and future Star Trek and Star Wars director JJ Abrams had written a script for a film and submitted it to Warner Bros. with  plans for Charlie’s Angels McG to direct titled Superman: Flyboy.

Obviously the project never made it to theatres and Bryan Singer’s Superman Returns did with meh results. Diving into the time capsule, articles of Abrams’ project have made their way to the world wide web. ComicBookMovie discovered artist Adolfo Martinez Perez’s storyboards for a climactic scene, io9 has also dug up some of artist Phil Saunders’ concept art for the battle mechs in the film, and a few examples of which are below. You can see his whole set here.

So what was Abram’s script about? For a detailed account, you can read his whole script here. The script went through a few drafts and included lots of weird changes to the Superman mythos. In Abram’s tale, Jor-El committed suicide rather than dying and Krypton never blew up at all. Kal-El aka Clark Kent aka Superman was sent to Earth to fulfill a prophecy. Superman’s foe was going to be his cousin, Ty-Zor, and the storyboard below shows the circumstances of his ultimate death at the end of the film. There’s also an odd encounter between a dying Ty-Zor and Lex Luthor, who was apparently meant to get Kryptonian powers through some sort of transference.

After learning about this interesting piece of Superman history, I’m glad fate stepped in and the film was never made. If it had been, we wouldn’t have the amazing Star Trek film and upcoming sequel from Abrams or look forward to his directorial debut of Star Wars. What do you guys think? Would Superman: Flyboy been disastrous or successful? 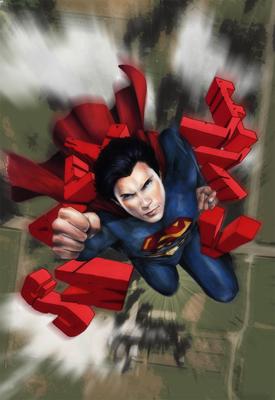