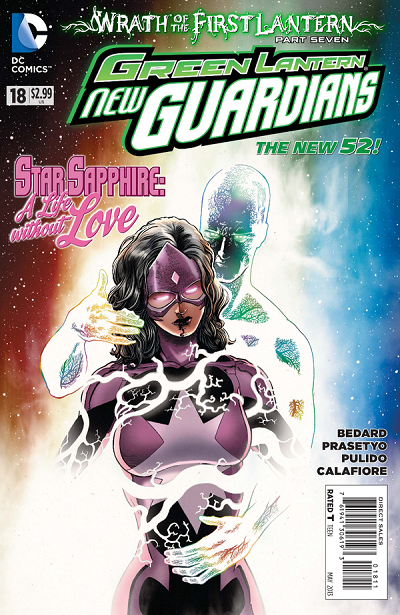 I made a big complaint in my review of Green Lantern Corps #18 that even though the framing device of the First Lantern works as a great vehicle to easily recap the past of the key Lantern characters, doing every single one of the major players, one after another each and every week across all of the secondary Green Lantern titles in the exact same fashion, was starting to drag the story down quickly.  Even worse, marketing these character recaps as integral chapters in the overarching Wrath of the First Lantern crossover made it sting all the more.  Luckily, it appears that is starting to turn slightly, as Green Lantern: New Guardians #18 starts to break up the singular monotony of history lessons and take the direction more into a ‘What If?’ style of storytelling to advance the plot.

The First Lantern has rounded up the extended members of the New Guardians, including Carol Ferris, Saint Walker, and Larfleeze; and does that voodoo that only he can do to alter one defining moment in each of their lives to see how things would have played out.  Will Saint Walker be able to spread hope to the universe if he became a Green Lantern before his family died?  Will Carol Ferris live a more fulfilled life if she never left the military to save her father’s company?  And will Larfleeze learn to share if reunited with his long-lost family?

While the end goal is the same, showing the power of the First Lantern and his reality-bending ways, the structure of the issue reads better than the single character recaps that have come in the issues before for the Earth-Lanterns.  Whether this is due to the singular nature of the change, making the story read as an isolated one-off tale for each character; or the fact that it has multiple characters to break up the storytelling into its own smaller chapters, it still reads infinitely better in the enjoyment arena for people who are already aware of what has come before while still working as an introduction to the main players for new readers coming on for this last stretch.

The artwork is obviously disjointed, with each sub-chapter sporting its own artist to separate them thematically as well as visually.  While some work better than others, each is able to bring a certain amount of the focus character’s preferred emotion to the panels through subtle nods and staging.  It is sufficient for the storytelling at hand, but nothing leaps out to me personally as an astounding example to point out.  Again, this may be due to the backwards facing nature of the story wearing me down more than the art presented not delivering for some.

I actually give this one a weak buy if you were turned off of the crossover from the previous issues but are still interested.  It may seem arbitrary after my grumbling about character recaps a few weeks ago, but as I said above, this one does make an effort to separate itself via presentation even if the grand plot design does not move much further along by the end of it. 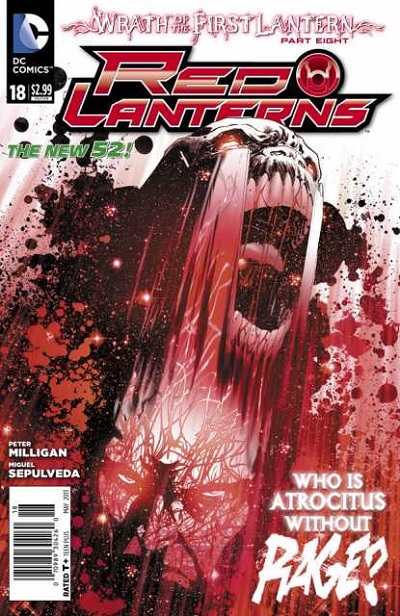 Guess what guys!?  The First Lantern can learn!  Coming off of last week’s Green Lantern: New Guardians (aka the review you read before this one), it would seem that the writers have taken notice of the layout in these setup issues and have worked to make them a bit more palatable to veteran readers.  While ultimately falling into the same milieu of filling the reader in on the past of the main characters, this issue follows the example of the previous by breaking up those expository sections of the chapter with the adventures of supporting cast members.  More importantly though, the actual story that ties all of these titles together actually moves forward as well!

Confronted by the First Lantern just as he has finally laid claim to the goal of his search, Atrocitus is shocked and surprised by the revelations that the all-powerful being shows him if just one event in his life is changed: the lack of the Manhunters ever going berserk and destroying his home planet.  Meanwhile, Rankorr continues his attempt at reintegration with the humans of Earth after being turned into a Red Lantern, and Bleez may have a say in his plans.  What life would Atrocitus choose if given the option, and what role will the Great Heart (the receptacle of all of the Guardians emotions) play in the larger scheme of the First Lantern?

This issue plays out as another ‘What If?’ tale, though taking a much more grim turn in the way the story plays out.  While serving as back-story for the main character Atrocitus, it is the means in which the alternate timeline runs its course, topped with the clear-cut choice given to him, that makes this issue play out as more of a character study than a history lesson.  A slim dividing line, but one that makes all the difference for a reader that already knows all of the cold facts of the character’s past.  More noteworthy than that though, the actual goals and events of the Wrath of the First Lantern crossover take their first step forward in one of the satellite titles of the Lanterns; hopefully indicating that the ‘It’s A Wonderful Lantern’ portion of the crossover may be at its end.  Not to mention, the final page cliffhanger plays into a major status quo shift for the slightly perturbed Atrocitus that honestly intrigues me on where the title may go next.

Sepulveda brings his usual rough gritty style to the book, using detailed eyes and his keen shadow work to draw emotion out of characters that are notably void of such petty concerns.  It does wonders for the title in making it more than a story about, as Milligan calls them in this issue, ‘Black Hearted, Napalm Spitting Monsters’; and more about the moral justifications for their actions as well as the personal ramifications for those decisions.  I stated last issue that taking these characters from creatures that could only shout variations of the guttural ‘HRRRNNGGGG!!!’ to people deliberating on moral implications is one hell of a feat, and Sepulveda can claim his fair share of that task due to the emotive nature he has brought to the title.

An actual buy for those following along.  Containing an interesting tale of what Atrocitus would have done had his life not been turned upside down by the Manhunters, advancing the supporting cast in their own goals, moving the crossover along in plot (for what feels like the first time in any non-main title Green Lantern issue), and shaking up the status quo of the Red Lanterns; it’s a pleasant change of pace after all of the recaps that have been coming for the last few chapters of the crossover.