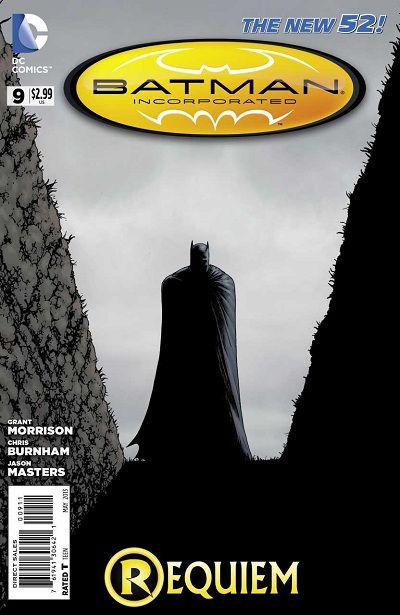 Last does not always mean least.  After an entire month dealing with the emotional shockwaves from the devastating events in Batman Incorporated #8, one could arguably start to feel some grieving fatigue by the time the title that started it all is able to respond to its own storyline.  Luckily, Morrison and Burnham, while still hitting all of the right emotional beats throughout this fallout chapter, jam pack this issue with more fantastical story development than a North Korean ‘news’ room; sharply separating it from being all gloom by utilizing the striking impact of the event to drive the plot forward at an unparalleled speed.

Damian has been struck down, and the entire Incorporated team must make a personal decision on how they will react to the events that have led them to this dark day.  As we see the end result of that fateful evening where Batman, Nightwing, and Red Robin continue the fight against Heretic and the rest of Leviathan, we also attend the somber and reserved funeral for the fallen Robin.  While heroes have fallen, villains have risen, and the world responds to the demands of Leviathan’s world-devastating threats; will the distraught members of the Incorporated team be galvanized by the loss of their fellow members?  Who is to blame for this tragedy?  How will Talia respond to Heretic’s actions?  Will Bruce confront Alfred for allowing Damian to join the fight?  Does anyone remember Knight died too?  And most importantly, can Bat-Cow save them all?  (Answer:  Moo.)

As you can see from my vague recap above, there is a lot of meat on the bones of this issue of Batman Incorporated.  So while I thoroughly enjoy delving into the personal thoughts of these people on a one-by-one basis, I more than welcome Morrison putting the big questions into play here by focusing instead on how these individuals react with one another after this time of crisis.  Blame, guilt, fear, rage, drawing together and pushing apart; it is these interactions that drive the story forward as each player in the game has a different motive, attachment, and reaction to all of the events that have come before.  And with the sheer amount of characters this title holds within its pages, combined with the broad scope and previous content to draw from, there is a metric ton of plot to squeeze out of those interactions.  Enough so that I can only comically picture Morrison and Burnham sitting on top of the finished script to make sure it closes properly from the disgusting amount of story contained within.

Burnham continues to deliver artwork that fits perfectly with the plot taking place.  Action scenes that feel big in scope even in their smaller skirmish nature, emotive faces that capture the moment in a single image, and attentive detail to utilize every spare scrap of page he can find to visually tell the story.  All wrapped up in a lighter package that delivers the needed emotional punch without drowning the tale in the dire gloom that surrounds it, while also adding that touch of surrealism that every Morrison tale needs.  Jason Masters offers his assistance on a few pages as well, and does a good job of trying to match Burnham’s overall tone, as he falls just short of matching the style itself.  It is a noticeable art shift, but not as jarring as I would have feared due to the structure of the pages he brings to the issue.  I’ve said it before on multiple issues of this title, but the artwork is truly astounding on so many levels once you have the emotional tethers of the story in your bones.

I give this one a buy.  All of the questions that people had regarding the fallout from last month’s issue will find at least some form of address in this chapter, and it is chocked full of ramifications and development.  It’s clear that Morrison is planning on ending his long (loong [looooong]) run on Batman with his usual large dramatic flair, and this issue shows that his building momentum is far from over with the death of Damian.  And as we start drawing closer and closer to the end, this chapter emphatically shows that he intends to only pour more speed on top of the frenetic tale as we round this final bend.  So while Batman Incorporated #9 may be the last title to get its say in the Requiem month of mourning, it’s only fitting that it was also the title most apt to show all of the story developments that it has caused in its own wake.

Jump-On Point:  Ummmmm.  The real beginning?  Batman and Son.  The fiscally realistic starting point would be Batman Incorporated #1 from the New 52.