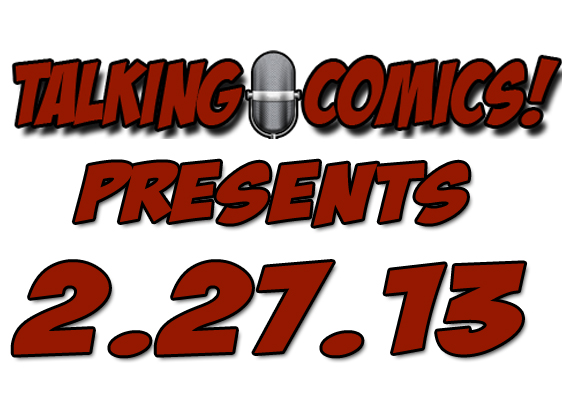 Hello everyone and welcome to the all new Talking Comics Presents. For the past few months David Short brought you this column, and he did a fantastic job giving you the scoop on the books we were most excited about. David has moved on from Talking Comics, but a great idea is a great idea, and so I have chosen to continue the column with a few slight tweaks.

1. I will be making every attempt to get not only the recommendations, but the reasoning behind why our fantastic editors choose the books they do.

2. I want your input, what books are you excited for? Have you found any great fan art this week? Whats your favorite cover, panel or bit of writing (easy on the spoilers)? Do you have a video testimonial, audio blurb or art of your own you’d like to share? Send these things to bobby@talkingcomicbooks.com and the best of them will be included here from now on!

Well, enough with the who, where, what, why and how, I give to you Talking Comics Presents for the books releasing on 2/27/13. 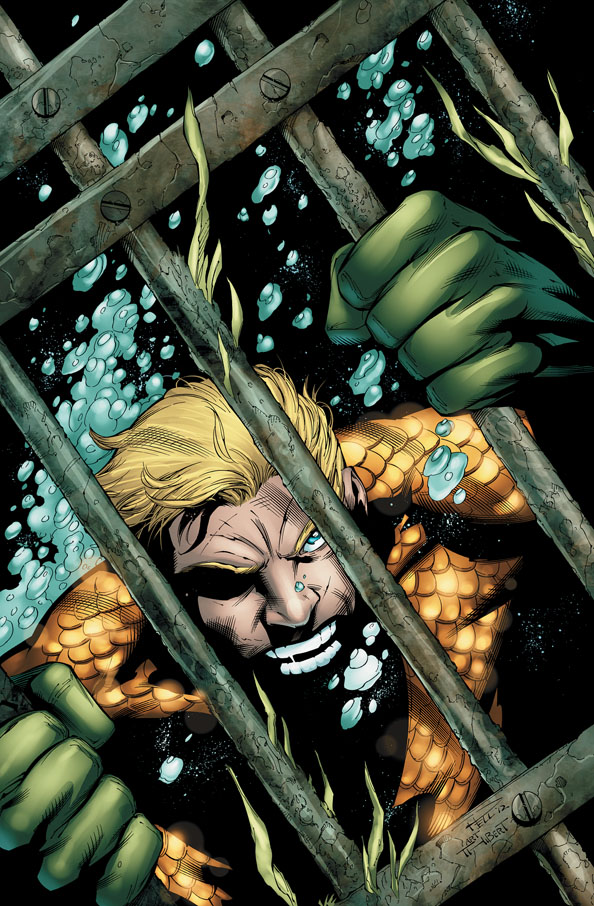 There is no accounting for personal preference when it comes to any art form, but in terms of raw sales data, there is no doubt Geoff Johns has elevated Aquaman to one of the heavy hitters at DC. Throne of Atlantis  brought about big changes, and the first glowing reviews for  Justice League, so it will be intriguing to see if the year plus of momentum Johns has built up can continue.

DC Comics Says: “A startling epilogue to “THRONE OF ATLANTIS”! With the secrets of Atlantis revealed, Aquaman is confronted by a horrible myth from Atlantis’s past that’s connected to his own. Plus: Mera confronts a longtime enemy.”

Adam Shaw says: “I am interested to see how Arthur and Mera will adapt to the change in the book’s status quo with the big changes at the end of the event with Justice League.” 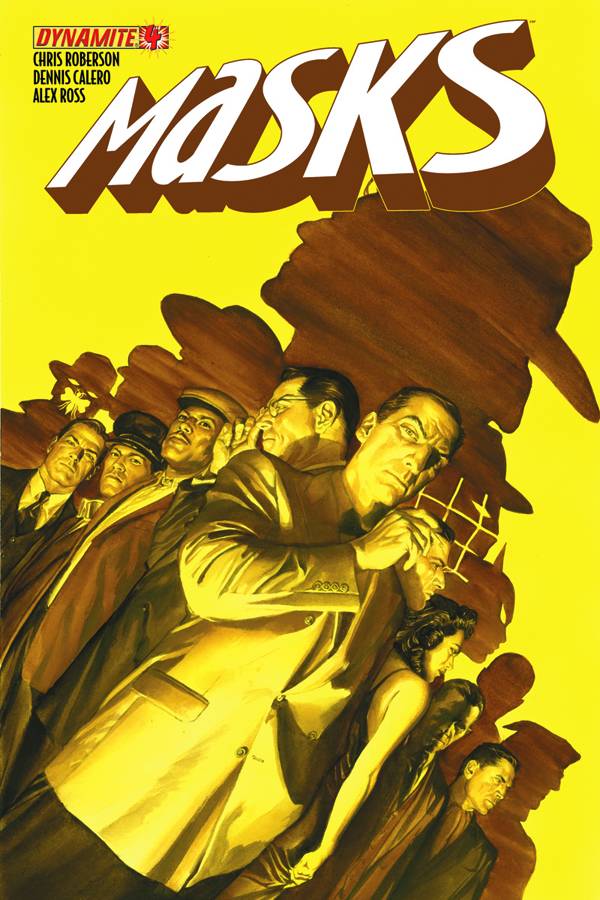 Recommended by Bob Reyer
Dynamite says: “With the law twisted and perverted to benefit the unjust, those who serve justice have no choice but to operate outside the law. The Spider digs into the shadowy past of the new governor, but what he finds raises more questions than it answers. Back in New York City, the Shadow and Green Hornet are marshaling their forces, as vigilantes and heroes like the Green Lama, Miss Fury, and the Black Terror join their cause. Meanwhile, a blind lawyer and a fugitive artist find themselves standing alone … against the might of the Black Legions.”
Bob Reyer says : “For me, it’s Masks #4 (Dynamite); Chris Roberson has done a fine job so far, building slowly to the teaming up of these various pulp and radio heroes, and it’s about to take off; and even though Alex Ross is only on cover duty now, Dennis Calero has been no slouch in conveying the period and mood required! 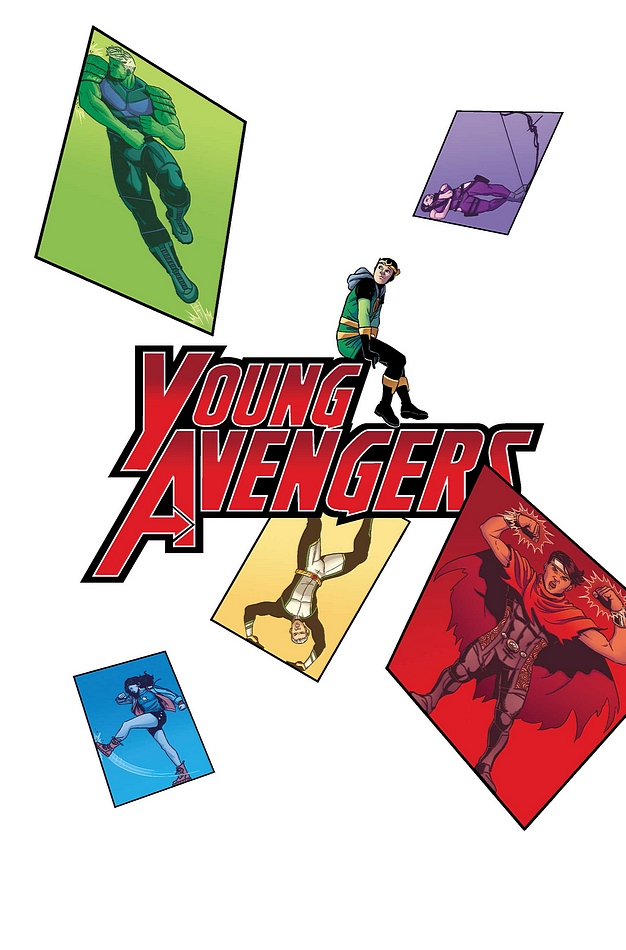 Marvel says:  “Has Wiccan made a horrible mistake that comes back to bite everyone on their communal posteriors? Spoilers: Yes.Does this guest star the Uncanny Avengers? Spoilers: Also Yes.A figure from Loki’s past emerges. Friend? Foe? What will it be? Spoilers: It’s Foe.And much more from Marvel’s most critically acclaimed book. Yes, we’re saying it’s critically acclaimed and it’s not even out yet. We are very bad.”

Joey Braccino says: “As a huge fan of both Kieron Gillen and Jamie McKelvie, I am most excited for Young Avengers #2 this week. After last month’s critically lauded debut issue, YA is one of the hottest new series under the Marvel NOW! banner. Young Avengers is a throwback to the “young and reckless” heroism of some of those classic Silver-Age X- and Spidey-stories. And McKelvie’s artwork is simply gorgeous.”

Guardians of the Galaxy #.1 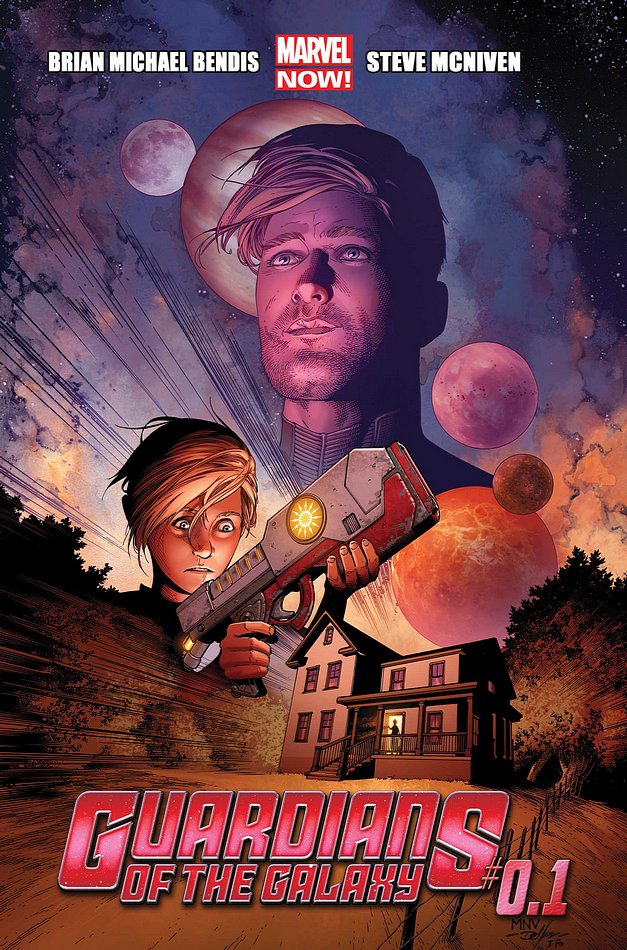 Marvel Comics says: “Move over Avengers…the Guardians got this. Star-Lord. Gamora. Drax. Rocket Raccoon. Groot. …and the Invincible Iron Man?! The Marvel Universe just got bigger as the legendary cosmic epic returns in the hands of superstar creators Brian Michael Bendis (Avengers, All-New X-Men) and Steve McNiven (Civil War; Old Man Logan). In this special prelude issue meet the man behind the Guardians: Star-Lord… and discover how this child of Earth became the leader of the rag-taggiest of teams in all the Galaxy. All setting the stage for next month’s historic Guardians of the Galaxy #1. This is the start of something big, Marvel fans.”

Bobby Shortle says: “Brian Michael Bendis has been knocking it out of the park with his relaunching of the X-Universe in Uncanny X-Men  and All-New X-Men, and much like his world of mutants, I’m excited to get in on the ground floor of the cosmic side of the Marvel Universe. Over the past few months I’ve discovered that I find teams like X-Factor and Young Avengers to fascinating, because I don’t know their casts inside and out. Queque Bendis and his .1 issue of Guardians that will focus on the origins of Star-Lord, a character I know nothing about, but am hungry to explore. So pumped!

The Most Anticipated Book of the Week: 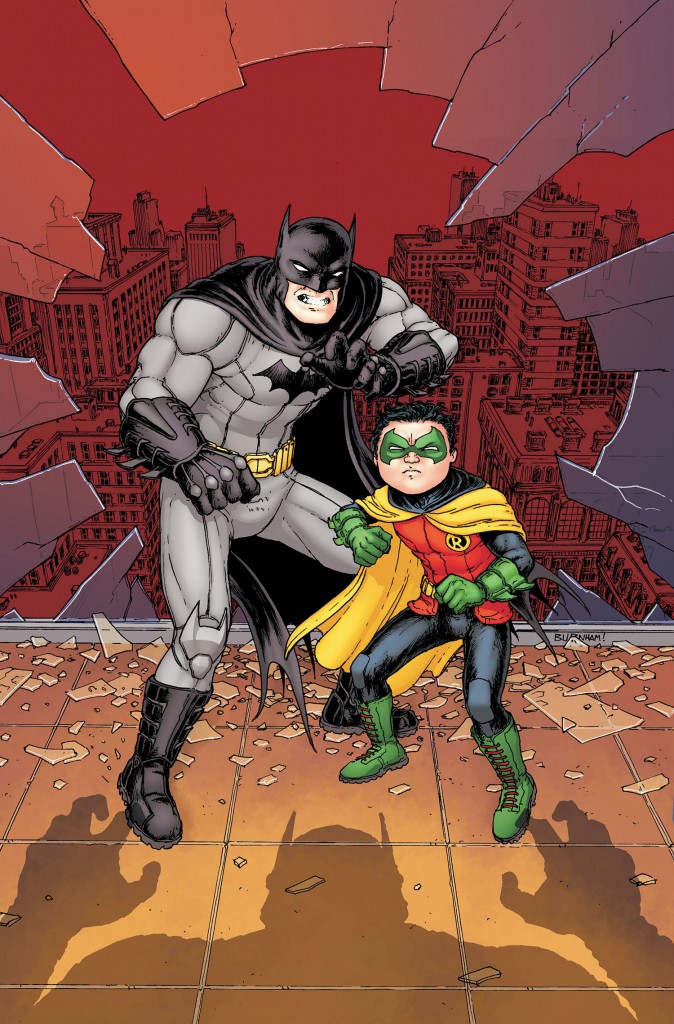 DC Comics Says:  “Everything Grant Morrison has been planning since the start of BATMAN, INCORPORATED leads to this stunning issue! You must not miss this one!”

Bobby Shortle says: “We are now at the home stretch of Grant Morrison’s time with the Caped Crusader and I’m terrified and excited all at the same time about how he is going to wrap things up. It has been nearly impossible to avoid spoilers on this issue, which is a crying shame for those who have invested in 8 years worth of reading material,only to have a single sentence bring it all crashing down. However, Morrison is unequivocally a genius and I cannot wait to see how his giant jigsaw puzzle of the Batman universe finally comes together.

Steve Seigh says:  “Without a doubt my two major books this week are FF #4 and Batman Incorporated #8. FF is a given, but after having just reread Batman Inc., and having heard of the major event that’s about to occur in issue #8, I can’t help but be super anxious to read this upcoming issue. I’m also really psyched for Journey Into Mystery #649, Guardians of the Galaxy #0.1, and  Hawkeye #8. It’s going to be a great week for comics.”

Mara Whiteside says: “I guess if I had to pick one, It would be the new Batman Inc. issue purely because of the hype surrounding it.”

Sean Lamont says: “Batman, Inc #8.  Having finally caught up after acquiring Leviathan Strikes/first volume of Inc last week, I’m all in for pretty much anything involving Damian these days. 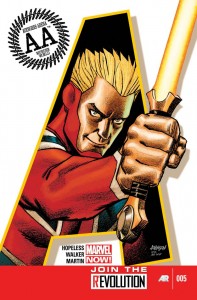 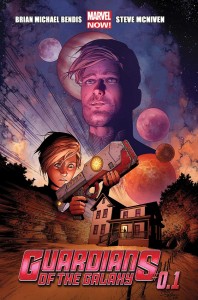 John D. says:  “This week my most anticipated book is Guardians of the Galaxy 0.1. I have never read a Guardians title before so I am eager to dive into what will be a brand new Marvel team for me.” 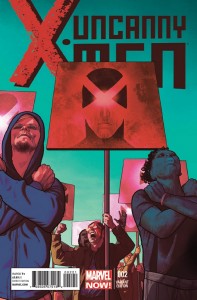 Luke H. says: “I’d have to say Uncanny X-Men #2 by Bryan Michael Bendis. I enjoined the first issue for the same reason I’ve been reading all new x men. I’d like to see Cyclops as a character redeemed. I’m still a little iffy on the costume changes but I’d really like to see how the whole Magneto angle is gong to play out as well.” 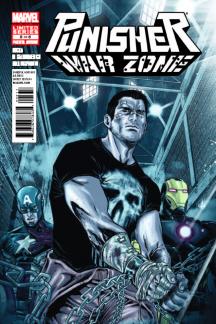 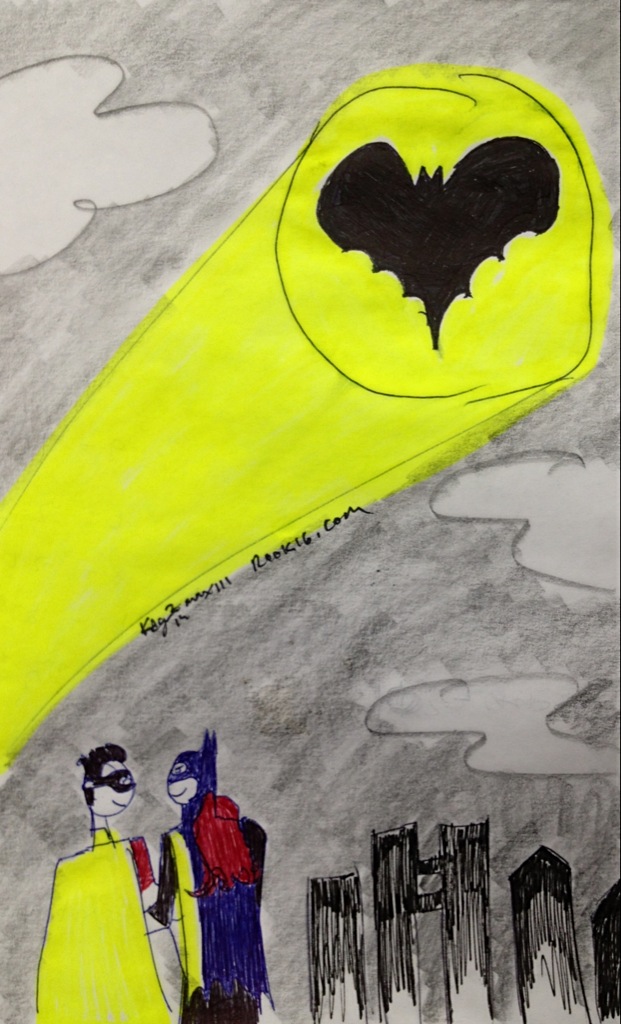 Kyle Garrett says “I’m not too excited about it but this is a pic I drew of Dick and Barbara for Valentine’s Day this year. It was super quick and done on a break at lunch but out of the other sketches I’ve done recently, this one actually has a background and a theme and mostly color which is why I am even sending it in.”

Well that’s all for this week’s Talking Comics Presents, don’t forget to send your picks and submissions to bobby@talkingcomicbooks.com, and check out the Talking Comics Podcast. This week’s show had an appearance by Batman writer Scott Snyder.