When you boil it down to its core, Matt Fraction’s Hawkeye has always been about relationships. Clint and Kate, Clint and Barney, Clint and Pizza Dog, Kate and the middle aged gay

couple, the list goes on. Matt Fraction and David Aja bring these relationships to life in an almost tactile way through nuanced writing and breathtaking minimalist art. So knowing that there is only going to be one more issue following this one is like a boxing glove arrow right to the gut.

This penultimate issue is pretty straightforward in terms of its story. It is essentially Home Alone, if Macaulay Culkin was an Avenger and the Sticky Bandits were a bunch of Eastern European mobsters in tracksuits and armed with machine guns. Here the residents of Clint Barton’s apartment building are preparing themselves for battle against the tracksuit draculas and the seemingly unbeatable clown.

Pre-showdown there are two near perfect scenes. The first is between Clint and his estranged, and former dark Avenger, brother, Barney. Fraction perfectly captures the love between siblings, but also the knowing that comes with being completely aware of someone’s flaws and destructive tendencies. A different sort of love is depicted between Clint and Jessica Drew (aka Spider-Woman). The awkwardness is tangible between the on again off again couple, but so is the compassion that comes with having so much history with another person. Clint apologizes for the mistakes he has made with her, and his ex-wife Bobbi, but refuses to ask for help.

The tender moments don’t last long though. Pretty soon a full-blown war is breaking lose, with arrows, fiery coals, machine guns, a clown, and a sports car. Aja’s art has always been something to behold, but the action sequences here are on a different level than anything he has previously done on Hawkeye. Using so little, Aja conveys so much through his art. A prime example of this is when an elderly woman wielding a baseball bat sucker punches Clint. Each of her words spelled out in his splattered blood. Followed by 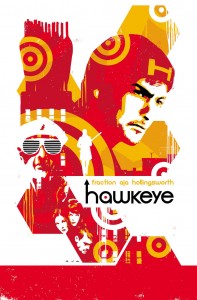 alternating panels of complete darkness and Clint’s semiconscious point of view. The entire sequence is beautifully chaotic without ever actually being confusing. The rest of the battle is executed equally well. With the reappearance of Gil’s dad who pours burning charcoal on a slew of tracksuit mobsters, while Clint lets loose a barrage of arrows from the top of the building. Pink-haired Aimee plows down some more with Clint’s antique sports car. And Clint has a brief bout with the enigmatic clown, who in the end fairs far better than his bow wielding opposition.

Having been stabbing the ear in a previous issue, Clint is still going through a bit of a recovery process with his hearing. Most of the issue is told through Clint’s internal monologue, but whenever someone is speaking directly to him it is shown in parenthesis to convey his lip reading. With occasional brackets indicating where he cannot quite understand what they are saying. This is just another one of the incredibly cool idiosyncratic touches Fraction and Aja have put in the series, that fits right in with the issue solely in sign language and one from Pizza Dog’s point of view.

Buy it. You feel Hawkeye #21 in every fiber of your being. The final pages are a rollercoaster of heart pounding action and the culmination of so many emotions built up throughout the series. It is hard to imagine a reader not welling up over the penultimate issue of Hawkeye. Whether it is from the heartbreak of loss, the joyful anticipation for an impending reunion, or simply mourning the near end of one of the best series in recent comic book history.