After the status quo shattering announcement last week detailing the departure of the Green Lantern Family of creative teams, it would appear that these shapers of the modern DC galactic landscape have no plans to go out with a whimper.  Pulling together for one last hurrah with the Wrath of the First Lantern crossover, this final addition by the people who have done so much for the characters and their place in the DCU, now looks to incorporate pieces from everything they have built before to assemble a theme-defining climax that just may shake the universe to its very ‘corps’.  So we here at Talking Comics will be looking at each of these books as they come out, answering your questions, and letting you know what you need to be reading so you too can join in on this defining event in the Green Lantern mythos! 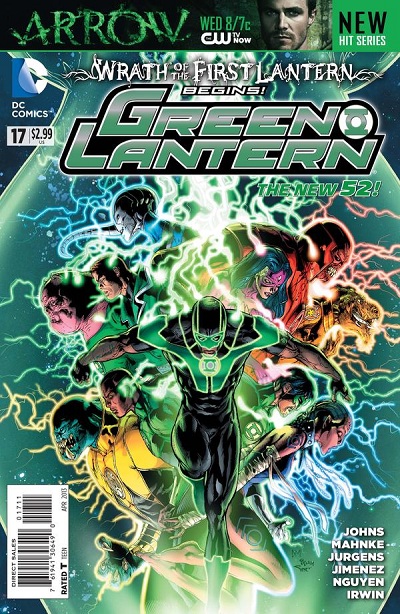 Coming straight off of the climactic ending in Green Lantern Corps Annual #1, the Lanterns have done the seemingly impossible and met their once masters, the Guardians of the Universe, on the field of battle.  But all wars have their cost, and this one is proving no different, as the conflict has released the mythical First Lantern from his imprisonment; arguably the biggest mistake the hubris-filled Guardians have ever conceived into the universe (and these are people who count building a robotic army that destroyed an entire galaxy among their list of mistakes).  With an agenda that could shake all of the various Lantern Corps to their very existence, and far-reaching abilities with immeasurable consequences following behind their usage, can the newly-minted Green Lantern Simon Baz work his way past the challenges of the villainous Black Hand and a ragtag splinter group of Oans on his quest to find Hal Jordan and Sinestro before it is too late?

Geoff Johns, while dialing the action down from the climax of the Rise of the Third Army finale, still manages to raise the stakes in the overall story by introducing an antagonist with incomprehensible abilities that could quite possibly destroy or alter all that has come before.  Given a clear motivation, and a convenient conflict point that hinges on the themes he has explored over the last eight years, it comes as no surprise that the First Lantern will confront the strengths and weaknesses that emotion has brought to the universe at large in this final story arc.  While exposition heavy to allow newer readers a rough-cut overview of the rich tapestry that has preceded this issue, the villain is established and there is plenty of forward momentum in the adventures of Simon Baz to keep current readers intrigued.

The entire art team has stepped up to make their final marks upon the galaxy as awe-inspiring as their first.  Mahnke delivers clear and imaginative scenes throughout the issue, while Jiminez’s details and flourishes help bring a sense of life and feeling, an obviously necessary angle to a book so heavily focused on emotion.  Alex Sinclair and Tony Avina steal the show though with their exemplary color work; both blatantly and subtly guiding the storyline through the emotional and symbolic overtones that their work plays with in this specific corner of the DCU.

Buy.  This is the title you want to follow if you want to keep up with the main storyline of Wrath of the First Lantern.  While there is an almost overwhelming amount of historical knowledge going into this final arc, there is a conscious effort to keep people up to speed with who the characters are and what their motivations may be.  Not the most perfect jumping on point, but as good as it gets this late into the game. 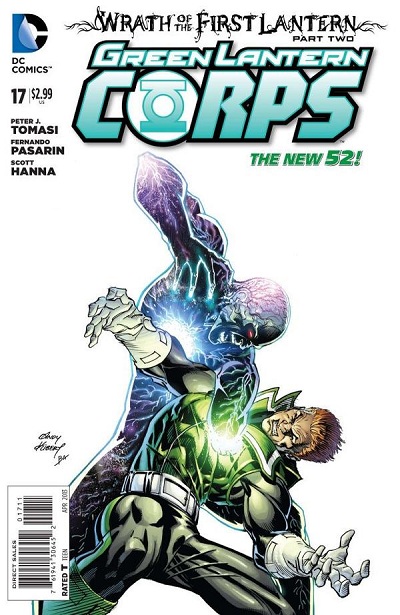 As a Green Lantern, just as it is in our everyday families, being a middle child is never easy.  And that is only one of the lessons that the second Lantern of Earth, Guy Gardner, will come to find out as he is ensnared and tortured by the powerful First Lantern.  Toying with the fiery red-head’s past as well as his emotions, the First Lantern may just break the strong-willed Gardner in his efforts to feed on the emotions that he can elicit.

I still stand by an earlier claim I made that we should have a national (comic national at least) Peter J. Tomasi appreciation day.  A silent yeoman of consistently solid work, this issue delves into some of the little explored past that has made the overbearing Guy Gardner who he is; providing an expressive character study while expanding on the threat and motivation of the overarching antagonist that drives the Wrath of the First Lantern event.  While the readers enjoyment will directly hinge upon their appreciation of the character being explored, I do believe some may find their broad stroke opinion of the quick-to-temper Guy softened by this issue as well as the Guy-centric chapters that came before.

For a story that revolves around eliciting an emotional response from the characters involved, Pasarin does an astounding job at taking the usually rough-and-tumble Guy Gardner through the paces of every emotion, and focusing on these rarely seen expressions through his panels.  While that is the driving force behind my positive review of his work, the opening splash that includes the ‘Evolution of Guy Gardner’ from childhood through all of his Lantern iterations over the years was enough to get my stamp of approval; with the rest of his work through the issue validating my reasoning for doing so.

Buy/Pass.  Confusing, right?  While both are not necessary to the story arc at large, I think interested parties should pickup either Green Lantern Corps #17 or Green Lantern: New Guardians #17 in order to get a feel of the First Lantern’s plans.  Either one will get you there, and it will basically come down to which Lantern you prefer; Guy Gardner or Kyle Rayner.  Those choosing this title will find a wonderful character piece on the rarely explored past of Guy Gardner. 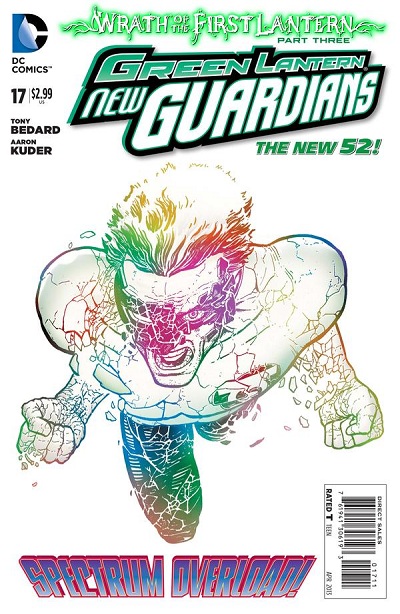 Confronted by the menacing First Lantern within his own home, Kyle Rayner’s newly-found powers after mastering the entire emotional spectrum struggle to stand up against the sheer emotional force of his latest foe.  Has all of his training led him to be the only one capable of resisting the devastating changes of the First Lantern?  Or, has his manipulative antagonist found a way to make him give it all up for one last chance to right the mistakes of his guilt-ridden past?

Much like Tomasi’s Green Lantern Corps #17, Bedard has taken the framing device of the First Lantern’s powers to perform a wonderful character study on Kyle Rayner.  While this characters history has been elaborated on many times in the past, the angle of approach in this particular issue allows Bedard to truly test the empathetic nature of the the fourth Lantern and push him to his very limits.  Clever usage of the obstacles placed in his path, and with a clear understanding of the character and his past, allow this particular chapter to shine as a defining glimpse into the very soul of who Kyle Rayner is.

Kuder’s artwork, while more than sufficient, is probably the weakest of the three titles in my opinion.  This by no means marks it as bad, as we are comparing it against multiple artistic powerhouses, but there were a few panels in which faces and body poses were just noticeably not quite at the same level as the other two books.  The emotional expression he is able to capture in other panels though (such as a long awaited embrace by Kyle), more than make up for the few that I have issue with.  As with all of the Lantern titles where the color work is exceptional, Quintana’s vibrant hues and murky shades do a splendid job of framing the story as it jumps from warm to cold and back again.

Buy/Pass.  As I stated in the Green Lantern Corps mini-review above, I recommend picking up either GLC #17 or GL:NG #17 pending on your preference of Lantern.  Both titles offer solid stories getting the plot beats needed while approaching it from different angles, though both do not seem to be necessary to follow the story at large.

Some of you may be thinking, but where is John Stewart in all of this?  We will let you know once he pops up, but I am fairly certain that he will make a rather large entrance upon his return.  So until then, keep your eyes peeled this week for our continuing coverage of Wrath of the First Lantern in Red Lanterns #17, and let us know what you think of this climactic final arc so far below!