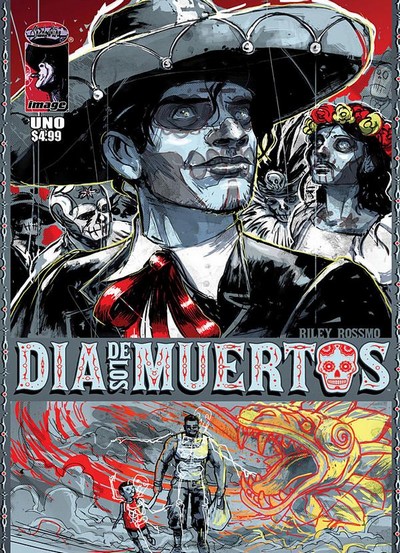 Dia De Los Muertos, a collection of short stories based around the Mexican holiday Day of the Dead, is the latest project to come from the creative mind of Riley Rossmo. If you read any of my reviews here you already know I’m a big fan of Rossmo. This will be a series of three issues which will include the writing of nine different talents like Alex Link (Rebel Blood), Joe Keatinge (Hell Yeah), Kurtis Wiebe (Green Wake) and Alex Grecian (Proof). I really love collaborative projects like this because it’s like a sample box of creative flavors and I always end up discovering a few new favorites by the end.

The first story in this issue is about a girl who yearns to know more about her mother who passed away giving birth to her. She possesses an ability to travel to the land of the dead and begins searching for her mother there, hoping for the chance to know her. Dead but Dreaming is a whimsical story of pain and joy coexisting in life and in death.

Story number two, Reflections, is a tale of supernatural haunting. A father is brutally attacked by some kind of spiritual presence in his home and turns to a professional “paranormal intuitive life coach” to help his family be rid of the angry poltergeist. A puzzle is unraveled and the motive behind the attack revealed, but perhaps not in the way the employer was hoping. I enjoyed this particular story very much, found it creepy and mysterious. Although it’s a short story, it covered a lot of ground, building some suspense and ending with a cool twist.

The final story is one of lost love and heartbreak. A musician falls in love at first sight with a quiet woman in his audience and decides to spend an evening getting to know her. She reminds him so much of a woman he loved dearly who passed away that he can’t help himself from talking to his new interest about the haunting similarities between them. The woman comforts him but speaks in poetry, seeming to have no other interest but providing companionship to him on this night. Te Vas Angel Mio is the sweet tale of a broken man given the gift of a night of love and warmth, temporarily healing his aching heart.

Verdict: Yet another super sweet, luscious piece of comic book candy from Riley Rossmo. Buy it and read it and eat it up like your mama’s baked mac and cheese. Maybe I’m just hungry, maybe I’m too excited about a new series that I love. Either way, take my advice and you will find happiness.