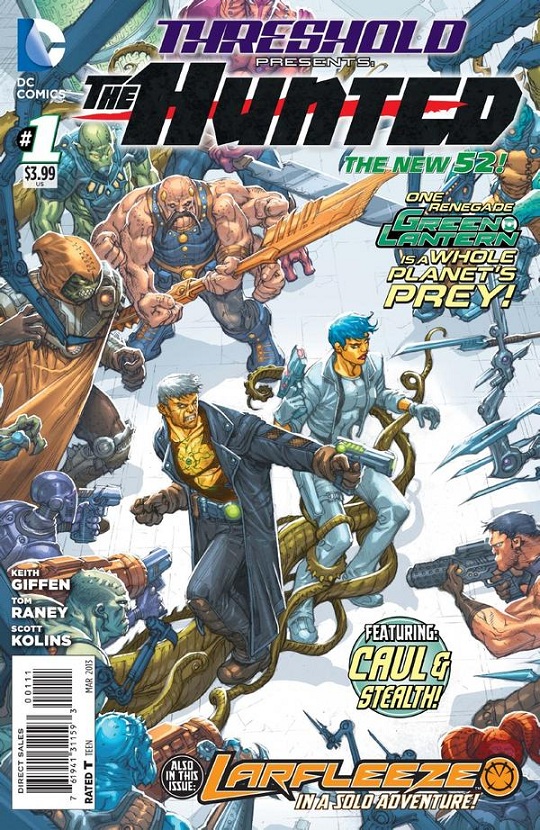 It’s tough to build an entire world from nothing.  I can only imagine it would be infinitely harder to do so if one were trying to create an entire universe from scratch.  So DC turned to one of the few people to have already done so, Keith Giffen, whose work in the Marvel cosmic milieu helped to revitalize abandoned characters and settings in the popular Annihilation event a few years ago.  But can lightning strike twice, in an entirely different universe, where the environment is being recreated and repopulated as it goes?  With Threshold #1, Giffen is off to a good start, but Space Rome wasn’t mod-fabricated in a single planetary rotation cycle.

The main story revolves around Jediah Cull, an ex-Green Lantern who was placed in deep cover within the Guardian-space bordering territories of the Tenebrian Dominion.  His cover blown in New Guardians Annual #1, he has been sentenced to take part in a planetary game/sport that the government banishes its insurgents to.  The game, a televised event called The Hunted, allows anyone on the planet to kill these people on the run and in return claim their bounty.  As the numbers of these Hunted begin to grow, containing bounty hunters, operatives, and ex-military members trained to survive and evade capture; they begin to organize amongst themselves.  But what chance does two dozen self-serving individuals have against an entire planet gunning for their heads?  Joining the main story is a backup about everyone’s favorite Lantern, Larfleeze; who finds himself the victim of another figure’s greed.

The first issue was clearly a stage-setting chapter.  While the setting was technically started in New Guardians Annual, none of that information is needed other than to see how Jediah found himself captured.  And do not be threatened by the Green Lantern link on the cover if you are behind there, as the thread that ties is pretty much encapsulated by the synopsis above.  The first issue works quite well as a cold open though, with a single page ‘commercial’ for the show explaining everything a reader would need to know at the start.  Of course, it would not be a cosmic setting without its own language!  Luckily, Giffen was very polite in using any new slang in context multiple times before it is used on its own, so it was actually one of the easier slang-ridden space languages to navigate in these settings.  Assisting in the world-building are Verhoeven-esque (Robocop, Starship Troopers) commercials that air on the ‘Glimmernet’, slyly adding in pieces of the universe and their standings in an amusing manner.

Utilizing new and re-purposed characters, there is quite a bit of snarky dialogue from the main players as they run across each other for the first time in their travels.  It is clear to see that humor will play a big role in the style of the book, but will not be its main focus, as quips were thrown sporadically as transitions between plot beats.  The initial glimpse at the setting shows promise, but did not expand much more than what was shown in New Guardians Annual (which is more than understandable to retread that ground with the #1).  Now, with a solid base under his feet and a format that can easily head off into entertaining fare, it will be interesting to see if Giffen goes to full on universe-building, or takes this segment and elaborates on it before adding in more pieces.

The backup, a tale about Larfleeze’s life when sitting on his planet of Okaara, is an absolutely fun story that honestly made me laugh out loud on occasion.  Funny, but with a plot to support it, it looks to be heading towards an entertaining romp through the cosmos with the Orange Lantern on a mission; another deft method to explore the setting through a comedic lens without making it seem like a lecture.

Artistically, Raney was more than adequate in his duties.  I will not lie, I was hoping to see more background settings in the chapter, but the story did not allow for too much in that regard thus far.  The backgrounds he does provide look dark and murky, but it is admittedly hard to move out of that environment when hiding in the slums.  His character work is quite fun though, with a fluidity of motion as both Jediah and Ember fight their way to safety.  Kolins, on the other hand, has taken a much brighter and cartoonish look to Larfleeze and his Okaaran home.  Extremely detailed, especially for the loose cartoon style, it has an interesting juxtaposition that gives a feeling of silliness and seriousness all at once.  A difficult and well-fitting look to any story centering around the Orange Lantern.

Hrmm.  I say buy.  While this acted as a foundation issue, the next chapter or two will really make a determination on how this series looks to play out as Giffen starts detailing the characters themselves.  This introduction though, was more than fun enough to warrant a second go around to give him the chance to do just that.  Personally, I look forward to seeing where he goes from here!

Jump-On Point:  #1 is the one.  If you want a little introduction tale though, you can check out New Guardians Annual #1, though almost all setting information there is handled in this issue as well.