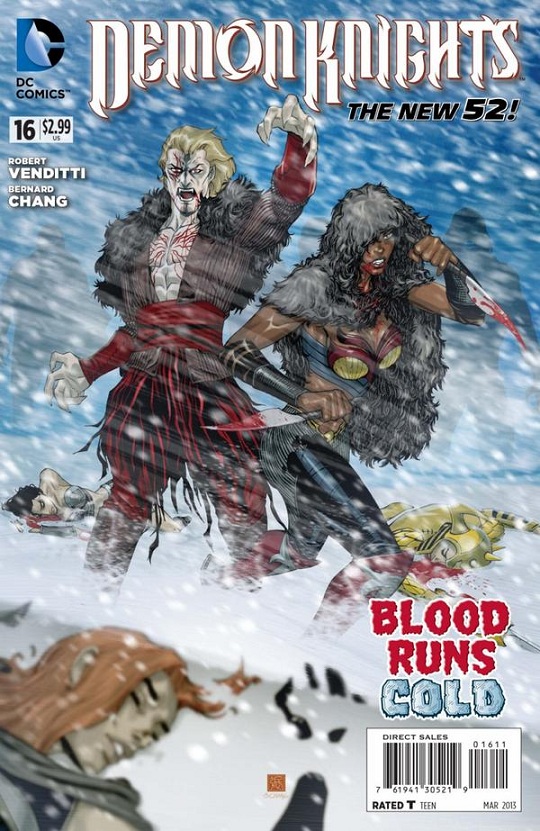 The Demon Knights ride again!  Taking place in a different time with looming threats, the guiding reins of control now find themselves in the hands of Robert Venditti and Bernard Chang with this newest chapter.  And, truth be told, while it is always exciting to see a new direction, I found it difficult to get hyped for a paradigm shift due to my contentment with Cornell’s overall vision in the last 15 issues.  Luckily, my concerns could not have been more misplaced though, as Venditti and Chang have come together to give me the Demon Knights I have loved thus far; while kicking the spurs to drive this cavalcade even faster.

Taking place 30 years after the Battle of Avalon came to its conclusion in Demon Knights #15, our eccentric band of adventurers have splintered and gone their separate ways.  But someone still remembers this disbanded team, and has put a bounty on all of their heads.  As the captured ex-teammates are shocked to see each other in chains, an old ally comes to offer them each a reason to combine their skills once again.  That reason; to stop an army the likes of which none have seen, as it continues its steady march across Europe towards its first target: the island of Themyscira.  Elsewhere, not all reunions are welcome ones, as the constant strife between some members have led to conflict unimaginable.

I thoroughly enjoyed this first part in what looks to be an epic quest for the Knights once again.  Venditti has managed to maintain the core of each member in this ragtag band reintroduced thus far (and does a spectacular job of establishing them for those who do not know the characters), while adding minor variations based on the experiences they have had over the last 30 years to give them a flavor of his own.  Not content to just introduce and get the team back together in this initial issue of his tenure, Venditti has also added in changing group dynamics, hinted at events that have occurred over the last 30 years, introduced a new enemy with clear and menacing intentions, as well as planted seeds of smaller goals the Knights will have to meet to stop them.  But what is most impressive about this jam-packed chapter, is that all of the above was accomplished while still telling a humorous and amusing adventure tale.

Pacing, a problem that some people voiced with the initial arc of this title, appears to be a worry no more; as the story moves with constant forward momentum while establishing characters on the move.  It will be interesting to see if Venditti can maintain this speed of storytelling for the majority of this run, but it does lend an air of energy to the story as plot beats hit in rapid succession.  If I had to reach for a complaint, it would be the cold entry into the final scene; as the characters that comprise it were the only ones not established, while the cliffhanger ending hinged on knowing who these people were.  That is nitpicking at its finest, but as I said, I would have to reach pretty far to find a valid complaint.

Chang, as he had proven in the last issue, continues to provide a beautifully complimentary art style to the story.  Bold and energetic, clean yet detailed; his images add a feeling of life to the characters and the fantastical settings they find themselves surrounded by.  His facial work is a little inconsistent, with a few slack-jawed scenes causing minor distraction; but the intensity/mirth he is able to bring through just the eyes alone more than makes up for it.  I believe I stated this in my issue 15 review as well, but his directorial approach to panels is quite impressive as well.  Skillfully able to capture both motion and majesty simply through the layouts of each panel themselves.

Buy.  I read comics for fun, entertainment, and escapism; and Demon Knights #16 was able to provide all three of those criteria.  A great start for new readers, as well as an intriguing next stage for those who have followed it from the beginning, I am happy to recommend this new era to anyone with an interest in a fantasy title.  Because the Demon Knights are riding once again; and this time, hell is coming with them…literally.

Jump-On Point:  This issue is as close to #1 as you will get.  Restarting practically everything from a new square 1 means easy riding for new passengers!