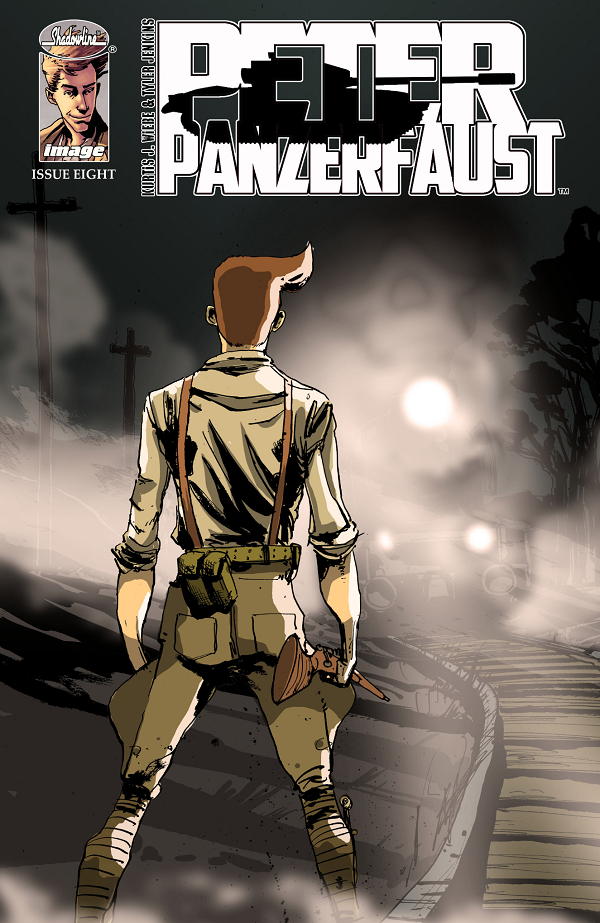 Peter Panzerfaust has thus far been a tale of love, family, and camaraderie in a time of war. It’s one of those stories that doesn’t get as much love as it deserves. In fact, we’ve only reviewed in once before on Talking Comics.

If you are one of our readers not in the know, this is a reimagining of Peter Pan set during the Nazi occupation of France. Each of the story arcs is told through the eyes of a different member of the “Lost Boys,” a group of teenaged orphans saved by Peter at the start of the war.

The opening panels of Issue #8 give us a brief flashback of the Darling’s (Wendy and her brothers) departure of their home and unsuccessful flight back to England. As we turn the pages we get to see their dog Nana’s journey to find her departed masters. Although there is no dialog, the scenes are narrated by Wendy’s recollections of loss and love. In war there is a common struggle between people to find hope and keep each other going. This message is conveyed beautifully in the juxtaposition between Wendy’s narration and Nana’s travels across the French countryside.

Over the course of this entire issue, the messages of helping others find hope stands in the forefront. Wendy’s meeting with Felix and Julien’s recollections about Wendy’s help really drive it home. This is a story about family and helping others no matter the cost.

The art, as per usual, in Peter Panzerfaust is beautiful. I will admit that I am not a big fan or expert of anime, but the characters have a real Lupin the Third feel to them.  Jenkins’s art is superb and he does well with all the emotion in this issue. However, Heather Breckel’s colors are what really sell the emotion and tone of the story. The use of subdued red and orange tones really help to sedate us, the reader, but at the same time remind us that war is always a stone’s through away.

*SPOILERS* The rescue of Felix at first appears to be fairly anti-climactic. With all the talk of hope, family, and the dangers Wendy faces in her intel gathering, everything has been a little too serene (the art and colors helping a lot). We know that there has to be some kind of catch. Not really a catch per se, but more of a hook. It’s the final pages and the reveal of Kapitan Haken (Captain Hook) that gives us that “Oh s**t!” moment that we have been anticipating. It’s a good thing they left Tiger Lily behind. I hope to see her doing some major butt kicking next ish!

Issue #8 is a great jumping on point for new readers. You get all the information you need to enjoy this issue without the headaches of checking Wikipedia for a who’s who. Buy this issue if a story about family,friends, and hope are what you enjoy. There is action, but that is not what Peter Panzerfaust is about. Think Band of Brothers; it rocks because of the bond between the men and the family they become during hardships. Explosions and dead Nazis are the icing.

If you like Peter Panzerfaust, be sure to let your local comic shop know to keep ordering it. The numbers have been low, and it would be a shame to see the story end abruptly.