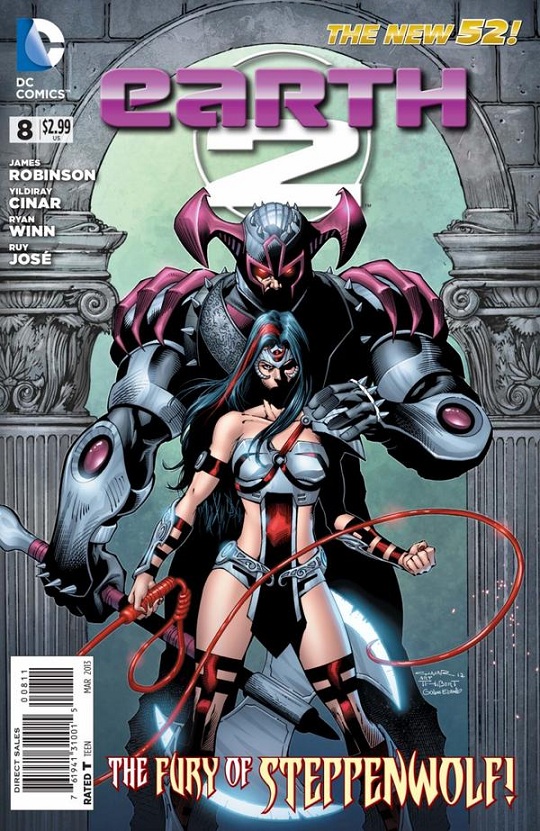 As with a few other titles on the market, I have been a lonely proponent of Earth 2 in my current company.  Self-contained, an ever expanding cast, and entertaining banter have kept the book fairly high on my read list each month.  I like what I like, and Earth 2 has personally been a fun read for me in the eight issues that have come before this one.  Unfortunately, while Robinson continues to take an interesting approach to the world-building of his own little pocket corner of the DCU, focusing on the villains as much as the heroes that comprise his setting; I fear the peg he chose to hang this issue’s cap upon was just not intriguing enough to carry the story being told, regardless of its place in servitude to the needs of the greater overarching tale.  Sans frills, it just doesn’t cut the mustard.

The second issue to focus solely on one of the great villains of Earth 2, this installment starts to fill in the gaps on who Steppenwolf is and what his goals entail.  Zooming into the faux-nation of Dherain, the renegade state that sided with the Apokoliptan forces during the great war five years earlier, we see that Steppenwolf has sought refuge in the isolationist nation to rebuild his power base.  Suspecting betrayal though, his loyal guard Fury goes on the offensive to protect her master.  But are the two of them enough to stand up to the unified might of an entire nation?

I pointed out entertaining banter as one of the facets that make me enjoy this title, and while the dialogue between the King of Dherain and Steppenwolf contains the barbed wit I have grown to like, the rest of the abundant word balloons feel heavy-handed with exposition.  Guards explaining who they are, soldiers giving history lessons to one another, and even Steppenwolf diatribing to ridiculous degrees.  I completely understand the intended goal of the issue, and even applaud the audacity to give equal time to the less-moral side of the equation in order to build more exciting future tales; but the execution on this particular chapter left me pondering what complexities there are with Steppenwolf to explore.  Sure, he is intelligent and has battle prowess, but emotionally there is nothing there other than the cliche ‘General who wants to take over the world’.  His protege Fury on the other hand, struck me as much more intriguing from the angles of goals and motive.  And while I am certain there will be some stamping feet to the character’s identity, my tolerance for redesigns may be higher than most, as the reveal personally only added to the interest this character can generate.  This may also be in no small part to the distinct lack of focus on her, causing the readers curiosity to pique even higher from the lack of information, rather than sink (ala Steppenwolf) due to curiosity expectations not being met.

While Nicola Scott has been dominating the pages in previous issues, it is always quite nice to see Cinar step up to the plate and deliver an absolutely beautiful rendition in his own right.  Attentive to detailing in both the fore and background, his panels are filled with life, yet clean in their delivery.  His action sequences are quite animated, with a time-lapse axe throw gracing one page, while dual panels on another show the before and after-effects of one action in the struggle; lending an air of motion to the pages overall.  In other aspects, I have highlighted two colorists in my time reviewing, and I was about to make it a third…until I noticed it was Alex Sinclair again on this book.  Sneaky.  Regardless, his color work here is astounding as well, vibrant and assertive without drawing attention away from the overall experience.

Sadly, a Pass.  It’s not a horrible issue, but it lacks that je nes sais quoi that have made his earlier entries sing with fun and intrigue in my opinion.  I am hopeful that next issue will restore the direction I have been enjoying, but I do not wish to discourage his approach at breathing life into the Earth 2 world in these methods either, as the Terry Sloan issues were quite enjoyable.  And while I was entertained by those villain spotlights as well as earlier issues of Earth 2, and absolutely adored Robinson’s Shade maxi-series, it is precisely because I know he is capable of so much better that this issue feels a bit off par to myself.

Jump-On Point:  Issue #8 would be easy to walk in on cold, but reading Issue #1 would give perspective to the key players at hand.