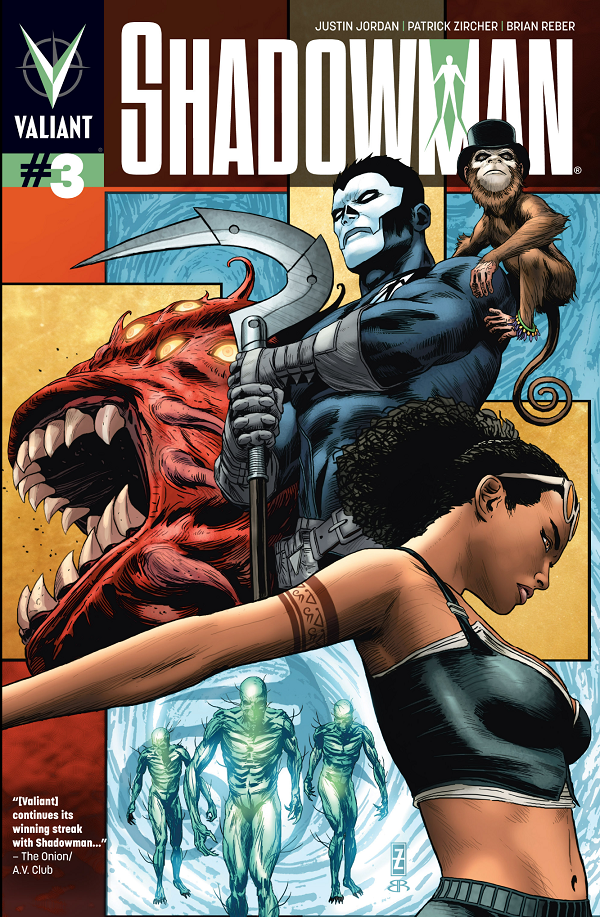 Shadowman is the newest series of Valiant Entertainment’s entire re-launch of their universe. Each of the company’s titles is appealing to different niches in the market. Shadowman is here to fill that dark black magic niche in the Valiant universe.

Issue #3 starts off immediately following the cliffhanger in issue #2. If you’re just picking up Shadowman from this issue, don’t worry! There is some confusion about what is going on, but that it is okay. Our protagonist Jack Boniface is just as confused as or more so than you are. It’s dramatic irony; we have the four paragraph recap of the story on the opening page. Jack is just plain ol’ SOL.

In the openings pages the skin-flayed, multi-eyed hulk, known as Mr. Twist, attacks Jack and his two new acquaintances, Dox and Alyssa. Twist is working for a demon named Darque. He’s an evil entity that is trapped. With the death of the Shadowman, Darque can get free. Jack is Shadowman, but he doesn’t really know it. I’m over simplifying things, but like I said, there is a really nice recap page.

This issue really picks up after the opening fight at Dox and Alyssa’s safe house. Alyssa is able to get both her and Jack out of the safe house, but they end up separated in a place called The Deadside. Out of the pan into the fire? For Alyssa it seems that way. Jordan and Zircher quickly cuts us over to Jack where we meet Jaunty, the talking voodoo monkey. The dialog is quirky, fun, and by the virtue of being enjoyable you miss that you are reading a lot of exposition.

I really want to commend Justin Jordan and Patrick Zircher for keeping the pace of this issue up even after taking us out of the initial action, but I feel it takes a small dip midway through. We just encountered a talking monkey that probably knows more about the Loa and its connection to Jack and Shadowman. (Up to this point Shadowman has only really appeared in issue #1, and even that was brief.) However, we cut over to Twist’s interrogation of Dox. Which apparently isn’t going well, because Dox has some anti-demon torture tattoos? I don’t want to downplay the significance of small hints of a deeper story in the dialog of this scene. I personally would have liked to seen this scene before Jack and Jaunty meet, and let their scenes flow into one another. This is my only major gripe with this issue, and to be honest, it may not even bother you.

Once the story jumps back to The Deadside it continues to pick up. Jordan shows us more of Alyssa’s badassness, and we get to meet a past Shadowman. Again, Jordan gives us some pretty nice dialog; Jason is faced with the choice with either taking the path of sacrifice and torment by becoming the Shadowman or just walking away.

The art by Patrick Zircher in Shadowman is excellent and exceptionally detailed. Faces in particular convey a lot of emotion; complimenting Jordan’s writing in the final pages. If you are a digital reader, then you get a small bonus. At the end of each Valiant issue you get a few pages of unlettered, uncolored art. Compared with the finish product you really get a new appreciation (or disdain) for the colorists. Reber has done a pretty fantastic job with the issue as a whole, but the scenes in The Deadside are what really stand out. It’s bold, bright, but subdued in all the right places.

If you haven’t picked up an issue of Shadowman yet, then do yourself a favor and give this one a shot. You can go back and pick up the first two issues if you want, but I wouldn’t say they are a necessity. If you were on the fence about whether or not to continue with Shadowman, you should pick this up as well. We get a larger look into the mythos of Shadowman and a build up for what should be some awesome action. Oh, yeah! There was also a talking monkey!

This review was written while listening to Fleetwood Mac’s Tango in the Night.