I give you part 2 of my interview with Joey Esposito. Part 1 focused solely on his Kickstarter project, Pawn Shop, and from there we tackled just about anything you can think of. Part 1 can be found here.

Talking Comics: If you don’t mind, I have a few questions about both your position at IGN and the books you’ve been able to write.

Talking Comics: I feel like you are in a very interesting position. You get to write both on the journalism side of the industry, and take part in producing actual books. Many people are looking to get into either/or, so what advice would you give to people who are trying to break into these fields?

Joey: Whenever I get asked that question, my best advice is to just do it. Even if you’re doing just for yourself, the experience of doing something and accomplishing something—even if it’s for a blog you started yesterday, or whatever—just the experience of getting that out there is more valuable, than trying to get a job at a top entertainment site or something. I always say (for instance) if you get a position [whether it’s where I’m at or some other bigger outlet] and you suck, then you started at the top and you’re just going to go down –because you haven’t worked out the kinks of your work yet. So, it’s better to just start for yourself, and just make sure you get better at what you’re doing.

But often times I see people calling themselves “aspiring writers” or “aspiring artists” and that always gets me, because, to me, if you’re doing it at all, then you’re a writer. If you write regularly, you are a writer. Whether people see it or not is another story, but you’re actually creating something—whether it’s content, or a story, or poetry, or whatever—if you are creating something then you are an artist, or writer.

In terms of getting a job in the industry, it’s really a matter of proving yourself that you can have the passion for this work. Before I worked here I had another job that was a freelance comics editor, but before that I was doing a lot of stuff for free. When I first started I was writing for free, but I built up the comics site for a really small website. And that showed passion and determination for my work and for the industry. That sort of built onto other journalism jobs in gaming, movies, and TV and stuff. And it just sort of snowballs until you get the coveted paying job! Then even with the paying job, I was still working a fulltime job on top of fulltime freelance work. So it’s still fun, sure. And I could be doing much less exciting things for a career, but it doesn’t mean it’s not a shit ton of work. I think people often forget that it’s still a job. You know? I mean, you’re doing a lot of work, and especially when you start, you’re doing the same amount of work, but you’re usually doing it for free.  I don’t want to sound dickish, but it’s a lot of work.

Talking Comics: I don’t think it’s dickish to call something you put your time and energy into (which could be going into other things) work—not at all.

Joey: Yea, I guess what I was trying to get through there was that there are plenty of things that get pushed aside, whether it be relationships or whatever. There are a lot of sacrifices that are made. I’m not sure it has to be that way, but I’m just speaking from my own experience. You know? That’s what I can convey from my experience.

Talking Comics: I can totally understand where you’re coming from. Sticking with the advice bit, would you advise the up and coming creators to take the Kickstarter route rather than pitching to any company that will listen?

Joey: For sure! Self-publishing is the way to go. Just like with what I was saying about just doing it in journalism [whether it be for a major publisher or not] with things like Kickstarter or Indie Gogo you can actually make your projects happen. You don’t need someone to say, “Ok, this is good enough. I’ll put this out for you.” You can literally do that yourself. Whether or not you work would benefit from having other eyeballs on it is another story, but financially it’s possible for you to make your own book and put it out there yourself. That’s the best way, because then you have a finished product that you can show. For example, with Footprints I had Footprints and that’s how I got the book at Zenoscope. It was because they liked Footprints. I had this thing, this palpable thing, that I could show them. It was a completed product to show this is what I can do—hopefully I’ll be getting better, but this is what I can do now. So you have this physical thing you can show people which is better than an idea, or a few pages, or (god forbid) a script. Don’t ever try and pitch a script! It’s not going to fly.

Kickstarter is a great option for anyone. You know? We’re seeing more and more established pros use Kickstarter to fund their passion projects. You see Paul Jenkins and Justin Gray use it multiple times, and that’s awesome. At the same time, I don’t think that takes away from up and comers or new writers trying to use it.

Talking Comics: I agree. I love going on Kickstarter and just looking at the new projects posted.

Joey: Yea! Some are really cool.

Talking Comics: Now, I’d like to shift focus to your books, starting off with a book that came out today. Grimm Fairy Tales: Bad Girls #1- 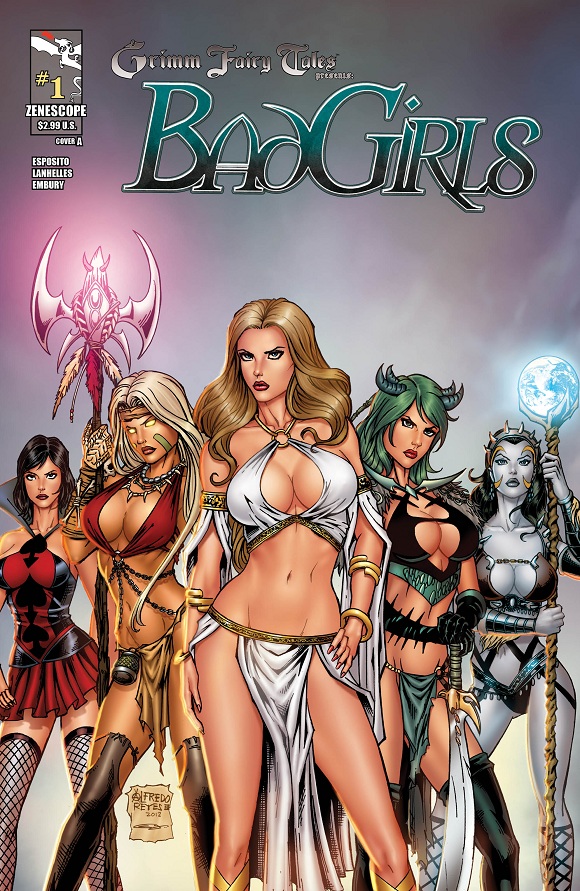 Talking Comics: (After allowing myself to regroup) Yea. So, Grimm Fairy Tales: Bad Girls #1, how would you describe that to somebody who isn’t well versed in the Grimm Fairy Tales universe?

Talking Comics: Cool, and how long is this miniseries?

Talking Comics: Sounds good, man! And are there any other books you have in the works?

Joey: Yea, lots of stuff! Besides Pawn Shop which is still up in the air at this point, Erik Norris and I have this short in a horror anthology that will be coming out…I’m not sure when. But our story is done. All of the other stories are done. There are some great people involved. So that’s really exciting.

I have a short in the next volume of FUBAR. The last two volumes have been World War II zombie anthologies, and the last one was a New York Times Best Seller. But the new volume, the one that I’m in, is called American History Z. Instead of just being focused on World War II, it’s all different time periods of American history with zombies. My story takes place during the years of the Korean War, and as depressing as that sounds, it’s a lot of fun.

Talking Comics: That’s a very interesting choice, I have to say.

Joey: It’s not the parts of the Korean War that you might expect, but you’ll see when it comes out. It has to do with a USO show. I can say that.

What else do I have? I also have a short in an upcoming—I don’t know if you know Vic Boone?

Joey: It’s a book that I love, back from when it was a Zuda entry. I loved that story, and ended up becoming decent friends with Shawn Aldridge– who took the book to 215 Ink [which is where Footprints was published]—but now he’s doing an anthology with different creators. They’re all doing 16 page stories starring Vic Boone, and I actually just turned in that script yesterday. That has been a lot of fun. Vic Boone is just a fascinating universe to me, because it mashes up the private detective stuff with 50’s Hollywood sci-fi. Then throw into the mix that he used to be a motorcycle daredevil, and it’s just such a fun place to explore. And, I think, that’s it.

I mean, there is other stuff in various stages. For example, we just finished wrapping up a pitch for a new book, and Jonathan Moore (the artist on Footprints) and I are starting something new as well. That’s all stuff way too early to discuss. And there is one major project that, unfortunately, I cannot talk about. But I can tease it like that! Other than that, that’s it, yea. 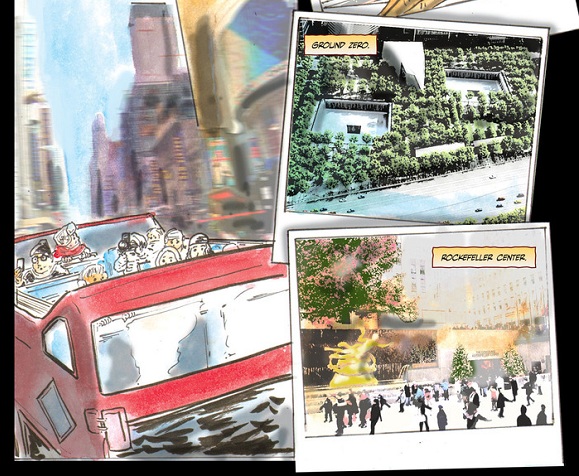 Talking Comics: You certainly have quite a bit on your plate, man.

Joey: Yea, definitely. That’s a good thing though. I hope.

Talking Comics: Well, I have two more questions to ask you, and the first is also from the IGN Assemble Podcast Facebook group.

Joey: I just want to give those guys a shout out. I love that, because the internet is so depressing sometimes. But the Assemble fan group is always legitimate, productive conversation. Even when there is dissenting opinions among the group, it’s still wholesome and fun. So, thanks to everybody there!

Talking Comics: They are pretty great—lots of really nice people there. However, Max wants to know if you would kill a man for a Klondike bar?

Talking Comics: Thank you for answering that the way I thought you would. Which segues into my next question. I know you love a certain Green Lantern– among many other comic book animals. Would you kill a man to make Ch’p Rebirth?

Joey: Ha! Maybe. I do love Ch’p, and I do love our Ch’p Rebirth idea. I think he would relate to a lot of people. I think it would be awesome! So yes, maybe I would kill a man for that. 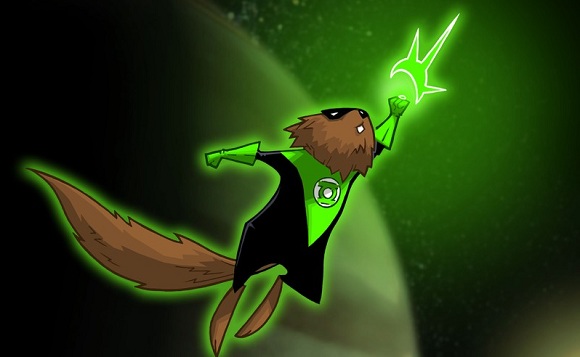 Talking Comics: That last one was more of a personal inquiry, as I share your love of all things animals and anthropomorphic characters. But I think that’s all I have for you. Is there anything else you’d like to put out there?

Joey: Just if you like different comics, if you sick of the routine super hero comics [not that they aren’t great], then give Pawn Shop a look. And I think Kickstarter is really good at, not only finding an audience for your book, but bringing a new audience to comics in general. What we are trying to do is promote the New York City and slice of life kind of aspect of the book, and maybe intrigue people that maybe aren’t into comics but dig that kind of story. So if you know anyone that loves New York, or lives in New York City, or has visited it please share the Kickstarter link. Just tell all your friends. Hit the like button, tweet it, share it on Facebook and spread the word online.

Other than that you can find me on twitter @joeyesposito, or hit up joeyesposito.com which is my blog. We’ll have updates on there from time to time. I think that’s about it.

Talking Comics: Cool, man! Well thanks for your time, and best of luck with everything you have going on. I really hope we get to see Pawn Shop in the near future!

Joey: Thank you too! You guys are great for helping out, and I hope we get to make it too.

For those of you who are wondering, Pawn Shop has been successfully funded! That is not to say that they can’t still be backed though. So go and make sure to fund this project even now! You can find Pawn Shop’s Kickstarter here. Also, make sure you tweet Joey with #chpwatch after you read this!