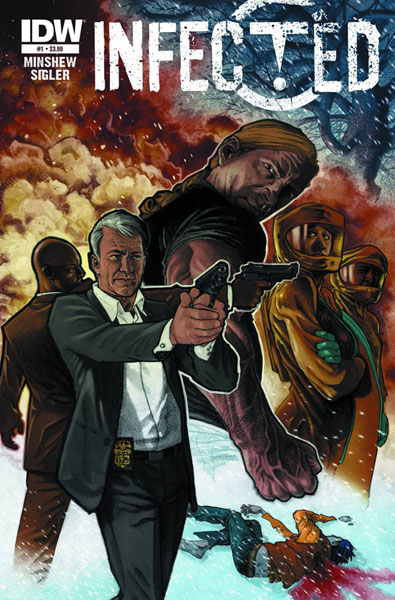 A riveting adaptation of Book One of the New York Times best-selling horror trilogy by Scott Sigler! Chad Minshew brings to life the story of a mysterious disease that turns ordinary people into paranoid, raving murderers. Former all-pro linebacker Perry Dawsey awakens to find mysterious welts growing on his body. Soon after, strange voices start whispering, telling him to do horrible things he is infected. The disease wants something from Perry, something that could alter the fate of the human race.

When I saw the title, I assumed that it was another zombie book as that is a popular genre, but after reading the book and then finally reading the solicitation for it, I was dead wrong. And I’m glad that was.

You’re gonna love the writing style.  I loved how it reads almost like a novel (as it is adapted from one). It has the feel that’s somewhat reminiscent of a mystery thriller and it keeps you invested in the story from start to finish. And that’s impressive considering that it’s the first issue and it’s a thirty page book. The art is fantastic with its vivid imagery especially the violent action sequence that takes place midway in the story.

Reading the story you get some hints and clues as to how a person gets infected through the perspective of the different characters. The book ends with a cliffhanger which left me with a few questions as I want to know what’s gonna happen next and if a story leaves the reader wanting to know more, then I think that’s always a good thing.

Verdict:
Buy this book. You won’t regret it and you might want to think about picking up the novel too. I guarantee it.