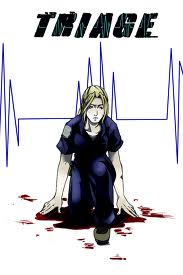 Cassandra Jurich is about to lose her job, be accused of murder and become Los Angeles’ first masked vigilante – she just doesn’t know it yet. In this gripping and gritty tale from Womanthology artist Candace Ellis and Transformers Prime writer Mairghread Scott, we follow an average EMT who discovers that she has powers beyond what normal humans can believe and that someone is trying to kill her for it.
But Cassie isn’t the only one with powers and she’ll have to survive LA’s most ruthless narco-trafficker, the deadliest assassin on the West Coast and the man pulling all the strings if she wants any answers.
Grab your flak jackets, readers. It’s going to be one hot summer in … Triage.

WE Comics brings readers another awesome series entitled Triage. Written by .Mairghread Scott (TRANSFORMERS: PRIME animated series and and the upcoming mini series from IDW Rage of the Dinobots) and illustrated by Candace Ellis (WOMANTHOLOGY: HEROIC) this first issue introduces readers to Cassie an average woman employed as an EMT who through some interesting set of circumstances gains powers and becomes a crime fighter.

Cassie’s adventure begins with her and her partner leaving the hospital on their way to the scene of an accident upon which arriving, Cassie is hit by a car while trying to assist an injured man on the road. Time goes by and Cassie awakes in her hospital bed to a mysterious woman having a phone conversation while pointing a gun at Cassie who’s almost fully awake.

With the lady disappearing out the window, a confused Cassie tries to remember what happened to her as she reunites with her partner who has something to tell her. Their conversation is interrupted by an emergency call and Cassie makes a decision that will take her life from being ordinary to extraordinary…

I found this issue to be excellent. I loved Scott’s writing, as well as Ellis’s artwork. I’m intrigued by the events that have taken place in this first issue, and I’m curious to find out where Cassie’s journey will lead her.

Verdict:
Buy this book either in print or digital. This first issue will immediately grab readers attention and never let it go till the end of the book leaving readers to want to find out what happens next. To read what Scott had to say about Triage, her other upcoming projects and more, read my interview with her here.