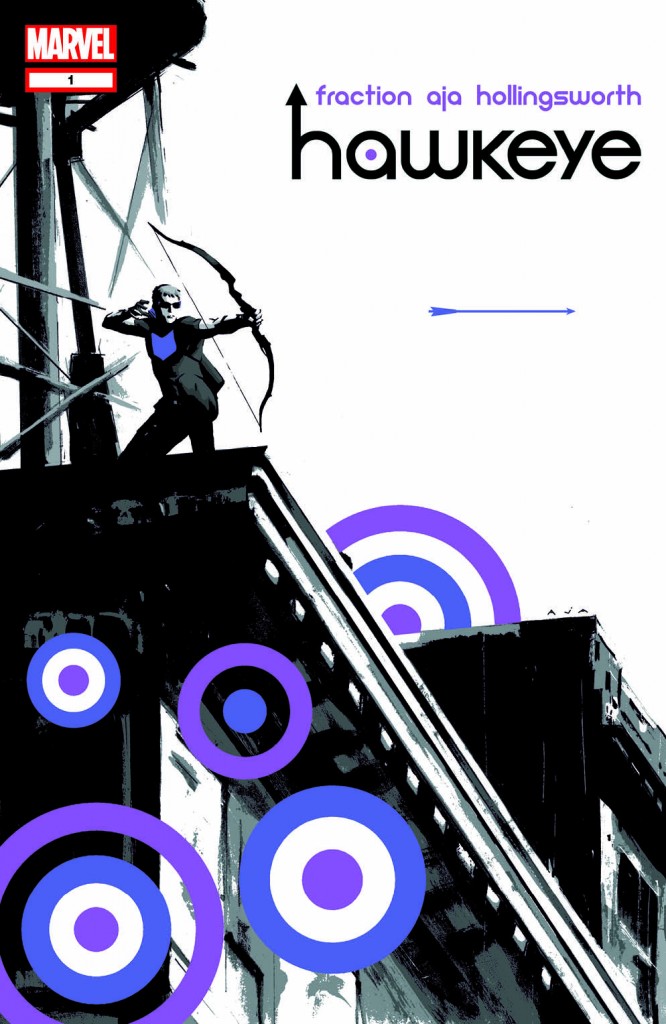 Hawkeye #1 begins with a very familiar image, one of Clint Barton, dressed in full superhero garb, suspended in mid air  and firing his bow straight into the air as the ground rushes up to meet him. It seems to be an obvious nod to the plunge Jeremy Renner took during this summer’s The Avengers, and much like in that film Mr. Barton’s arrow imbeds itself into the side of the building, swinging him towards the relative safety of a lower floor. That, however, is where the similarities end, because instead of gracefully crashing through a window, Hawkeye slams himself into a concrete wall and falls to the ground, totaling a car and landing the archer in the hospital.  This is our introduction to the world of  the new ongoing series from Matt Fraction and David Aja, and what follows is a story not of international espionage, giant battles and throngs of characters, but a small personal tale of a man trying to protect his home. Hawkeye #1 presents a take on the character I did not expect, but in taking this road less traveled it has the potential to be the defining solo story for the long tenured Avenger.

It’s clear from the Marvel title page that this book is aiming (get it) to change what you know about the purple archer. It reads simply, “Clint Barton a.k.a. Hawkeye became the greatest sharp-shooter known to man. He then joined the Avengers. This is what he does when he’s not being an Avenger. That’s all you need to know.” This description is clean and to the point, but it also says volumes about the direction of the story. By focusing on Barton’s life as a real person and by playing up the obvious point that he has no powers, Matt Fraction has created a world that feels about as far away from Avengers mansion as you could possibly get.

Clint makes his home in a rundown apartment building, and it’s one of those forgotten places where the dirt and grime on the walls is matched only by the griminess of many of the residents. It’s a place where being a good person gets you nowhere and Fraction uses that downtrodden environment to cast Hawkeye in the same vein as another famous bowman, Robin Hood. That is if Robin of Locksley had been genetically combined with John McClane and plopped into a world reminiscent of The French Connection.  This odd fusion gives Clint a perfect mix of self sacrificing hero and sly bad ass, which in turn makes him a character you want to keep rooting for.

David Aja, who did stellar work on The Immortal Iron Fist with Mr. Fraction, keeps the good vibes going here with some downright fantastic art. Not only are his character designs evocative and his panel layouts beautiful, but he also manages to keep the reader unconfused as they read through Fraction’s nonlinear narrative. The art style, much like the take on the character, wasn’t what I expected, but by the end of the book I was relishing the complex simplicity of Aja’s work.

Buy It – While thinking about the review for Matt Fraction and David Aja’s Hawkeye #1 I kept making comparisons to the excellent Winter Soldier ongoing series. In that book, Ed Brubaker has taken a well worn character and crafted a series that feels less like a standard superhero tale, and more like a Jason Bourne or James Bond espionage thriller. Here, Matt Fraction is doing the same, but instead of a spy story he is telling the Marvel comics equivalent of a 70’s cop drama. This take combined with some interesting narrative devices give the comic a fresh feeling and because of that I cannot wait until next month to get some more Clint Barton.