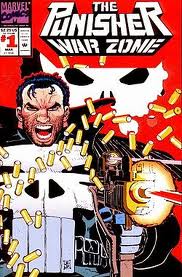 He’s one of my favorite characters in the comic world and I was first introduced to him while watching the Spiderman animated series as a kid in which he guest stars in three episodes-the seventh & eight episodes of season 2 and the eight episode of season four.  I read my first Punisher comic when my mom bought my sister the Marvel Legends Punisher action figutre that the Punisher: War Zone #1 comic with it. From there, I’ve watched the 2004 Punisher film and the 2008 Punisher WarZone film-bought of which I thought were very cool in their own ways.  Last year I was able to finally start collecting Punisher comics and I have a lot of them-not all of them mind you. Currently, I’m reading the new Punisher series which started in August which is written by Greg Rucka and illustrated by Mark Chacchetto .

The Punisher was created by writer Gerry Conway and artists John Romita, Sr., and Ross Andru. He made his first appearance in The Amazing Spider-Man #129 (February 1974). For those of you who are new to  The Punisher, here’s a few things you ought to know:

This year at San Diego Comic Con, Thomas Jane (who portrayed Frank Castle in the 2004 film) brought fans a most excellent treat when he debuted his Punisher short entitled “Dirty Laundry” which also features.  Jane had this to say about the film:

“I wanted to make a fan film for a character I’ve always loved and believed in – a love letter to Frank Castle & his fans. It was an incredible experience with everyone on the project throwing in their time just for the fun of it. It’s been a blast to be a part of from start to finish — we hope the friends of Frank enjoy watching it as much as we did making it.”

And that my friends is this week’s Character Spotlight. I hope you enjoy the fan film. Please keep in mind this isn’t for the faint of heart, it is a Punisher film after all!

Tales from the Archives: Make Mine Amalgam!!