Hey everybody! I am fairly active when it comes to scouring Kickstarter for the next big thing in comics. I came across something the other day that really caught my eye—first because it is by friend of the site Joey Esposito, and second because it looks to be something pretty special. Joey (Footprints and Grimm Fairy Tales: Bad Girls) and Sean Von Gorman (Secret Adventures of Houdini) have come together with letterer Adam Pruett(Footprints and Savage Dragon) to try and bring us Pawn Shop. I got the chance to talk to Joey about it.

Talking Comics:  You have this book Pawn Shop on Kickstarter, can you give us the basic premise of what it’s about?

Joey: Pawn Shop is a slice of life story about four different characters that, sort of, unknowingly intersect in their lives through this one Manhattan pawn shop. You have four different chapters. Each is a stand-alone story that follows one particular character. So, each story will be stand-alone, but once you read all the chapters they blend together into one larger story. And you can see how each character affects the other characters. That said, you’ll have each character appearing in each chapter, but each character will be a separate focus for every chapter.

The first Chapter, which you see in the preview pages on Kickstarter, follows a character named Harrold who’s an elderly widower. And it’s about his wife has passed away, and he has since moved out to Long Island. He has left the city, but in the move there’s this old fashion manikin that his wife used to use to make clothes and stuff disappeared somewhere in the course of him moving from the city out to the suburbs. It’s about him not being able to deal with letting go of his wife, and he’s on the hunt for this manikin that he is now missing. It’s like his last bit of closure with his relationship with his wife.

There are characters that appear throughout that chapter that will end up being the focal point of future chapters. 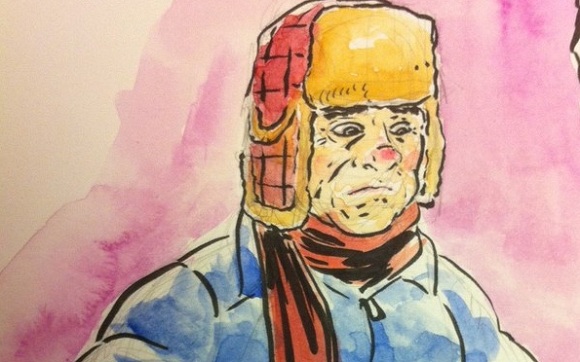 Talking Comics: Wow! That seems really cool. And I have to say, that this seems really different from the things that you have done so far.

Joey: Yea! It really is.

Talking Comics: I went and got some questions from the Assemble Facebook group, and Alex Dugger asks, “What caused you to come up with the idea of the book?”

Joey: Well, first and foremost, I love super hero comics (and the genre), but I have always been drawn to stories in general—whether it be comics, movies, or whatever—that are just about normal people. You know? I think there is nothing more fascinating to me than just regular, everyday life. Because as much as we strive for this escapism in our entertainment, some of the drama we go through in our personal lives is just utterly ridiculous. Like, if you were to take any normal human being’s life, and just try to turn it into a plot or a pitch for something, it would sound just as ridiculous as anything fictional you could make up. You know what I mean? But when you live it, you don’t really look at it from that perspective. Before I wrote Footprints or anything like that, all the other stories I had written were pretty much this kind of thing where we’re just following normal people.

In terms of Pawn Shop in particular, I have a pretty lengthy commute to the office. And I’m L.A., where traffic is horrendous every day of the week, and there’s this one particular pawn shop that I pass while I’m stuck in traffic on the way to (and from) work. One day it just kind of sprung on me a story where, you know, things in a pawn shop goes from one person to another. So, one person pawns something, and rather than staying in this shop someone else buys it.  Whether it be through a pawn shop, an antique store, or like the Goodwill store this one artifact or piece of clothing can pass through so many lives. The idea stemmed from following a group of different people through this one stationary item that is pawned off from household to household.

While that isn’t what Pawn Shop is now, that is how it began. It sort of evolved as this idea that maybe this central location (that happens to be a pawn shop), and its different artifacts, go in and out of each story. It all started with the idea of a pawn shop, and the things that travel through there on a daily basis.

I don’t know, the location just really struck me. Fun fact: Even though we are talking about Pawn Shop being this New York City story—which it definitely is. You’ll still see real locations and all that stuff. If you have been to New York City, or love New York, then this is a story that you will really enjoy. But the pawn shop itself and the block, you get to see the whole neighborhood it exists in, is all fictional. We made up our own little neighborhood in Grenache Village or something. It’s just its own little area that doesn’t really exist; except for in our heads, but the pawn shop itself is structured after the same pawn shop in L.A. that I was just talking about. Everything from the yellow awning and everything is all very similar to the pictures I sent Sean Von Gorman (the artist). I sent him a reference picture and he just took that and ran with it. So, the only thing that isn’t actually New York City is the pawn shop itself, but everything around it, as you can see in the pitch pages, is very much New York City. 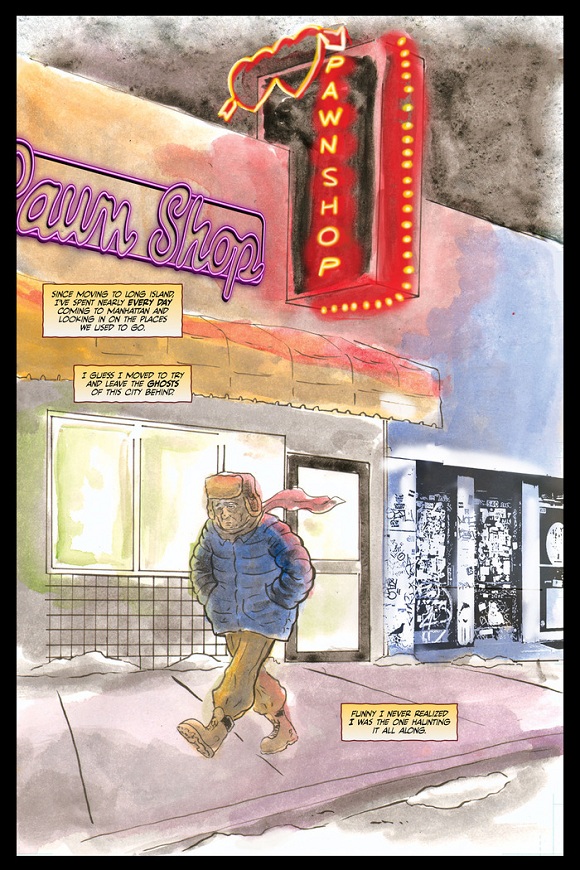 Talking Comics: I was looking at the art you guys have up on Kickstarter, and it really stood out to me. It’s beautiful. And it looks like you are actually taking pictures of real places and incorporating that into the art. Am I right in assuming that the book is blending photography with the medium?

Joey: That is a question that is better suited for Sean. I’m not sure exactly what the process is, but I know there are some digital elements to his process. So, he’s blending the water color stuff he does on paper with some digital backgrounds. In the instances of New York City locations, it goes back to us wanting to feel like it’s an actual New York story. And using those photographic elements of the actual locations that we go through like the buildings, the Seinfeld restaurant, and Rockafella Center are all photographic elements.

As to how he obtains the pictures or blends them into the other stuff, that’s beyond my talents, unfortunately. Haha

Talking Comics: Haha. It gives it a ton of detail that looks amazing, and is just something you don’t really see often. So you have Sean Von Gorman on art, and I believe it is Adam Pruette lettering the book. How did you guys come together for Pawn Shop?

Joey: Well, Adam lettered Footprints, so I’ve none him for a while.  He was a huge, enormous, help on that book. I mean aside from Jonathan Moore’s art on that book, Adam is responsible for how that book looks. He designed the trade, the covers, the logos, all that. All the stuff inside in terms of text layout and stuff was all Adam. So he’s been a great asset to me in general. He’s always the first one that I go to if I need anything lettered or designed. If he’s not available, then I guess I’ll have to look elsewhere—but for now, we have worked together on pretty much everything I have done.

As for Sean, we met on Twitter. A while ago I put out that I needed an artist for this other project that Erik Norris and I co-wrote. It’s a 12 page short in a horror anthology that is coming out. Sean had responded to me, and his style wasn’t exactly what I was looking for with that particular project. Then Pawn Shop came up, and I started talking to him about that. Just his style plus the water color elements just really nails exactly what I wanted. Plus, he’s just a rock star!

Joey: Yea. His personality is just so explosive. I haven’t met him in person yet. I haven’t, but just seeing him in the videos of the escapes, on twitter, and even in our Kickstarter video just makes his personality really attractive to me. And he’s just someone that I really like to work with because he’s so energetic about everything whether it is doing the art, promoting the project, or whatever. And he’s just someone that is nice to have in a partner, because he is someone that you know will do everything in his power, just like you’re doing, to make this project happen and make it work.

Talking Comiics: I can honestly say that I can’t really put into words how excited I am for this project and do it justice. From the art to the passion with which you speak about the work, it really tells me that the quality is going to be there. And I feel like it is such a different book than we usually get week in and week out, that it will really stand out.

Joey: Awesome, Thank you so much.

Talking Comics: No problem. Now, Kickstarter has a really interesting aspect with the rewards program. And having read through your rewards section, I have to ask; what is your favorite reward?

Joey: You know, that is one of the benefits of having Sean on the team. We can offer him to do his escape act. By the way, you can choose from chains, a strait jacket, or hand cuffs. So that is also an incentive for backers. 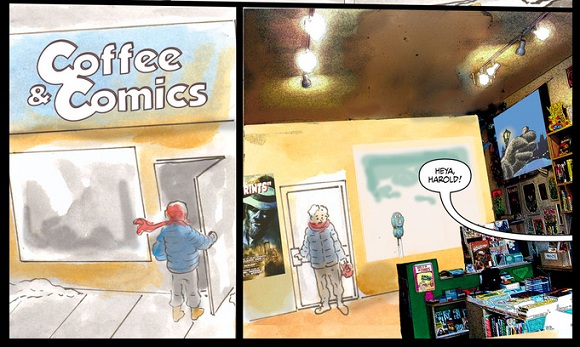 But one that I really like that we are offering is the illustrated poetry which is a challenge for me because I haven’t really written poetry a lot—you know, the occasional poem here or there. But most of my focus has been on prose and comics with the reviews and stuff like that. So, it’s a nice new thing for me to venture into. On top of which we have committed to Sean illustrating these poems and performing them together to post them online.

Talking Comics: Not going to lie, that sounds pretty hilarious.

Joey: Yea so, all around it’s just an area that’s totally new to me that I think will be really fun and amusing to lots of people. The other one that I like and hope gets purchased at some point is—there is enough space in the book to have a back-up—to be able to co-write the back-up with me. I say co-write, but I really want to let that person take the reins. I just want to be involved because I want to make sure it lines up with what I’m doing. So that’s cool.

Talking Coimcs: That’s all really great! The last time I checked you guys were about halfway funded, and you are asking for $7,000. Any update on that front?

Joey: Yea. Last time I checked, which was right before we started, we were at 45%. So, we are just about halfway there, and we are at two and a half days or so. 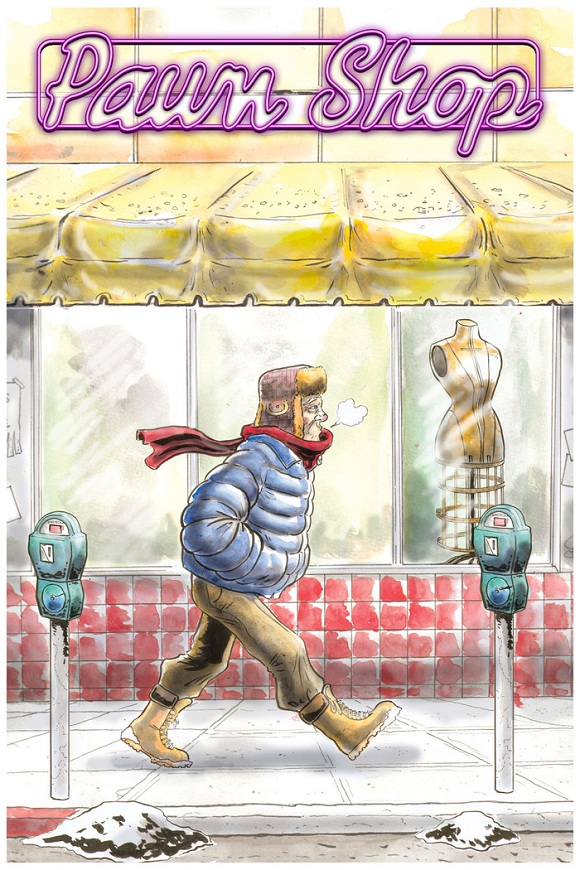 There was so much awesome to be discussed with Joey that we are going to break up the interview into two parts. Look for Part two tomorrow!

Go check out and back Pawn Shop on Kickstarter!