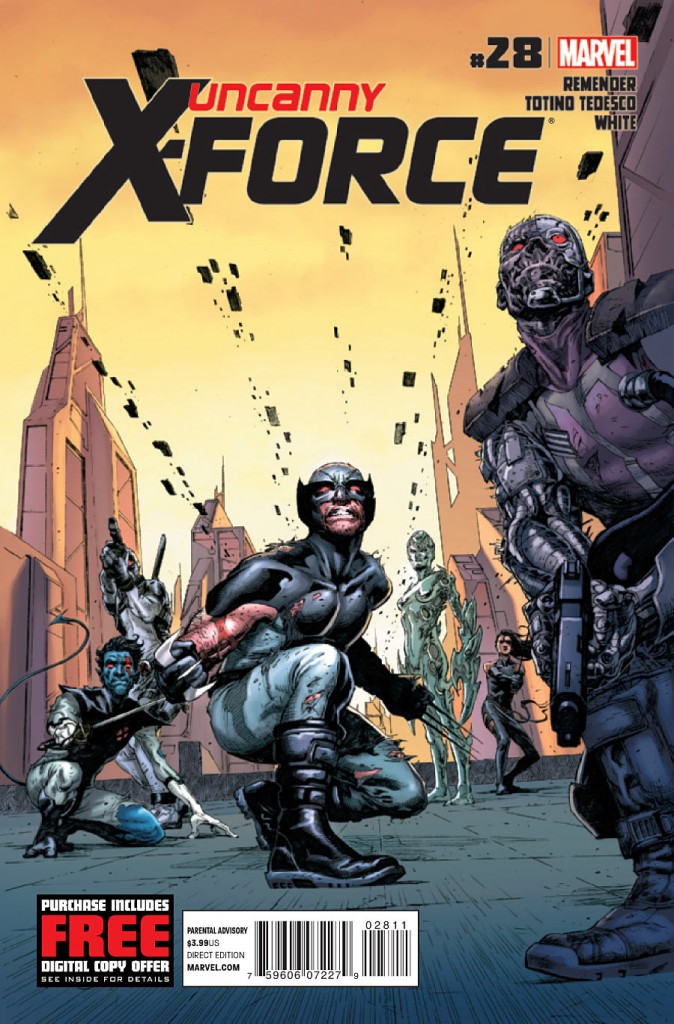 Uncanny X-Force is one of those titles that doesn’t take a break between punches. From issue one, the X-Force team has made the call to kill to protect. They’ve lost team members, encountered ghosts of their past, and battled personal demons. Issue 28 continues in this hard-hitting tradition, reminding us what is at stake if the team fails.

Issue 28 opens with an intense fight. Daken just revealed himself the mastermind behind the capture of the young Apocalypse (or Genesis or Evan or whatever he’s going by these days), Ultimaton is bent on destroying the X-Force, Gateway is dying at their feet, and Fantomex’s heart was cut out of his chest. Pretty bleak.

As we know, the team is pretty quick on their feet. In a moment of desperation, Betsy reaches into Gateway’s mind, looking for one last chance to teleport out of Ultimaton’s rampage. She finds it, and uses the last of Gateway’s strength to travel thirty years into the future. If there is anything comic books have taught us over the years, it’s that the future is not exactly the safest place. Plus, it makes a story really convoluted. The only thing worse than travelling into the future is travelling to an alternate dimension. Wait, they did that already…

This is where my only problem with Uncanny X-Force lies. I love the writing, the characters, and the issues each member has to face. I do not like travelling hither and thither to tell the story. I did not like the Age of Apocalypse, and I do not like the travelling to the future. If those two aspects were taken out of the series, it would be the ideal series for nearly everyone. Personally, I think my distaste for time travel in comics lies in my experience watching the X-Men cartoon (I did NOT like Cable or Bishop, and they confused me as a young girl), but a discussion on time travel in comics is neither here nor there. What you need to know about time travel in this issue is how it impacts our team.

The future thirty years from now is heavily influenced by the X-Force. Their murdering ways have caught up to them, and now they must each come to terms with the actions they’ve taken in their timeline and the actions they will take between now and thirty years from now (or then and thirty years from then which is now… I’m getting myself mixed up!). Remender also brings in grief process over Fantomex. Because of his sacrifice, Betsy escaped certain death. She must now come to grips with honoring his death and expressing sadness over a lost comrade and lover. Her emotions are the focus of this issue, and the final page is one of the most heart-wrenching scenes I’ve encountered in this series.

Issue 28 is an odd place to jump in for Uncanny X-Force. True, it is a fantastic issue (minus the time travel, but it all plays into the main story), but it isn’t one for people who have not read a single X-Force issue. For those that have a working knowledge of the X-Force story, buy it! It contains action that leads to a great cliffhanger, and I bet it’s important for #29. I also recommend reading issue #27 to get the full impact of Fantomex’s rescue of Betsy and how it will impact the team.