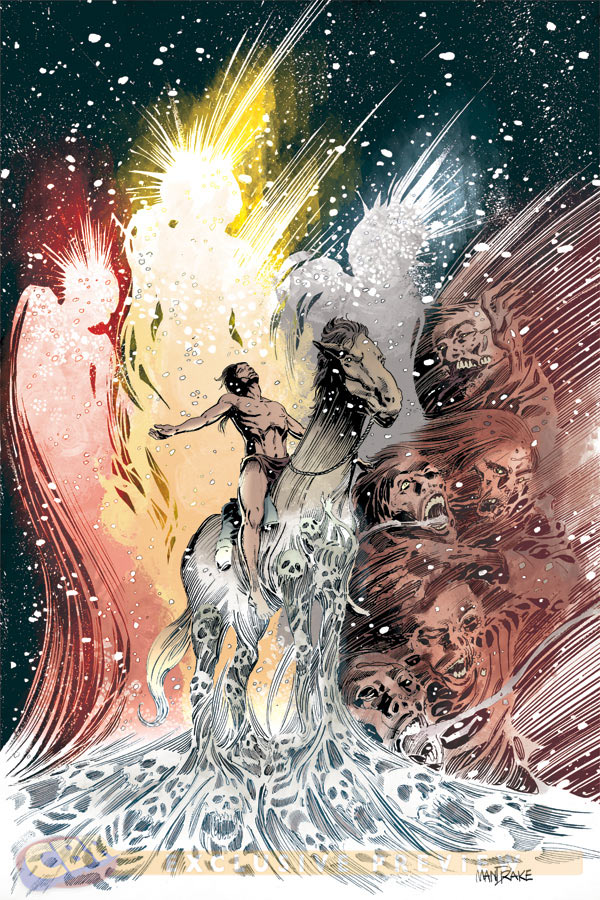 When people think of Lance Henriksen, people usually think about his long and accomplished career in the science-fiction genre of films (and occasionally video games). Whether it’s Aliens, Millennium or Run Like Hell, Henriken has carved out a name for himself in the ethos of science-fiction lore. So it seems only fitting that he make the jump to comics. Artists like Tom Morello and actors like Joshua Jackson have both found success in comics so why not one of the biggest names in sci-fi history? Alongside his biographer Joseph Maddrey, Henriksen is planning to debut his new six-issue limited series “To Hell You Ride” this December.

While talking to Comic Book Resources, Henrikson had plenty to say on how he came up with the story: “I went to Telluride, Colorado, at one point, almost twenty years ago. When I got there, it wasn’t the ski resort it is now; it had skiing, but not to the degree that it does now. I’m sitting in a bar there and I’m thinking, this is a box canyon, it’s sort of the end of the world in terms of travel, and I looked around me and saw all these people and thought they were reincarnated miners and hookers. They didn’t even know why they were there, but they were there.

“I remember when I was sixteen, there was a Urok Indian that I met. At sixteen, I was kind of a wild kid, and this guy took me under his wing,” Henriksen said, elaborating on the additional influences on the story he wrote as a screenplay in his hotel room, drawing both on the scene in the bar and his own life experiences. “His father had been an elder, a medicine man. He told me this story about something his grandfather had done. The cops came to this guy and said, ‘A girl’s gone missing, we can’t find her — we need your help.’ And the guy walked out of his house backwards, down the road and through the town, and people were following him. He never turned around, he walked the whole thing backwards, and he ended up deep in the woods. He turned around and there was a flat rock there, and he said, ‘She’s here.’ They flipped the rock over, and the girl was there, dead. That resonated with me and joined in with my thoughts about Telluride while I was there. This was a mining town, and it had all the old derricks and all that crap, and all the old mine tunnels, a lot of mercury in the ground at the edge of town toward the mountains. I thought, oh man, this is some story.”

Henriksen has been tossing around the idea for “To Hell You Ride” for many years now, even going so far as to write a potential script for it, but most of it has been lost over the years so it was up to Henriksen and Maddrey to re-create the story as best as they could. ““What leaped into my mind was a line of a Dylan Thomas poem: ‘The ball I threw while playing in the park has not yet reached the ground.’ Which gave me almost the whole form of the prologue of our story.”

But it wasn’t all Henriksen when they were writing, it was a collaborative effort. “”This has evolved out of a gathering. We’re all gathering information and converting it into a story, which is really great. We literally talk about this at least once a week, even after the script is done. As the pencils come in, we discuss it, and as we talk, we reveal so much that would have never been there any other way. You can’t work at any step of this in isolation, as far as I can see, and have something really creative come out of it. The communication level between Tom and Joe and I is extraordinary. We’ve been enjoying it for that reason if none other.” “I have a feeling that this comic is going to be very controversial, and I’m looking forward to that.” Henriksen added.

If nothing else, “To Hell You Ride” looks like a unique story, one that hasn’t been done before (or at least in the way Henriksen is doing it), and judging from what I’ve seen so far, I believe this could be a great hallmark in this actor’s storied 50-year career.