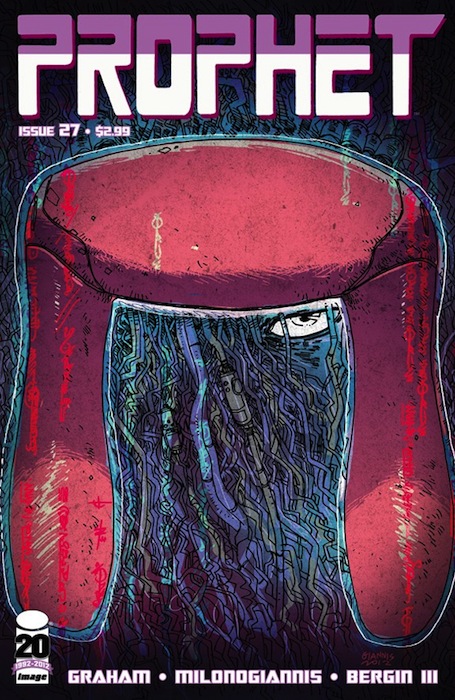 Story by Brandon Graham with Giannis Milonogiannis and Simon Roy

Those who read my last Prophet review can tell that I’ve been very much enjoying the relaunch of this title under the stewardship of Brandon Graham. Graham has been creating something special with this title, writing some truly inspiring science fiction while still drawing from the roots of the character (created by Rob Liefeld).

That connection to the original character is strongest in this latest issue where Prophet’s strange facepads reappear and there is a mention of Diehard, the android member of Youngblood who has appeared in other Liefeld titles.

I’m not entirely sure which Prophet this is (we’ve seen many of them by now) but this appears to be the old John Prophet who was brought back in a previous arc. This Prophet hitchikes a ride on a space worm to a pod reef, a place where he fought before, seeking out his lost companions.

I won’t spoil the whole issue, but suffice it to say that he finds one lost companion, and gains a way of finding another.

There’s action here, but this issue seems to be building toward something else. It’s the start of a new arc, and I’m eager to see where this is going. And, if other Liefeld creations are going to appear, I’m very interested to see what shape they will take.

Art chores on this issue are handled by Giannis Milonogiannis and fit in well with the rest of the art on the series, though of course with his own unique style. Milonogiannis even gives us a rather poignant interspecies alien sex scene. Something about his art seems a bit more Asian-inspired than some of the previous artists on the title, so it’s nice to see a little something different.

Prophet continues to fire on all cylinders and it continues to be one of my favorite current series. There’s plenty of action, but it’s a slower build, with plenty of time and space given over to the worlds that Graham and his artists create and an almost tacit encouragement to slow down and look around. Highly recommended.