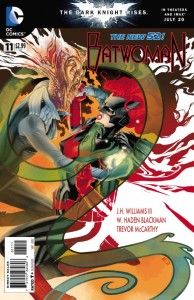 As you are well aware of, The Dark Knight Rises came out this week. It may be too much of me to hope that people might start picking up Batbooks, I sincerely hope that the movie will impact the sale of comic books. Gotham City is rich with complex characters and a variety of styles.

One of these Gotham characters is Batwoman, whose recent series has dealt with the supernatural side of Gotham. In her current arc, Batwoman has been up to her elbows in larger-than-life villains. A weeping woman, a man with a hook for a hand, and particularly troubling Bloody Mary, and a shapshifter who has grown too big for her britches. Though not a well-known Rogues Gallery, these characters have meshed well with each other to create a situation that seems impossible to escape.

Secondary to the Batwoman story is the story of the woman behind the mask, Kate Kane. With her cousin nearly dead and her new relationship starting to fall apart, Kate is in desperate need of learning to lean on people. Though this issue does not resolve all of Kate’s problems, it clearly sets the tone for Kate’s personal life in future issues.

One more thing: ever since Neil Gaiman announced that he will be working with J. H. Williams III on the Sandman prequel, I have been ecstatic. Williams did not do the interior artwork on this issue, but he did the cover and set the bar for the whole series. McCarthy, with the help of Perez, has continued to help tell Batwoman’s story with surreal and haunting images.

This is a great issue. I don’t see any reason to not to buy the concluding issue of the To Drown the World arc if you have been keeping up with the story. Those that haven’t been reading may be confused. Issue #12 next month will be a great jumping-on point for new readers. I think I’ll go ahead and recommend that issue to you right now.