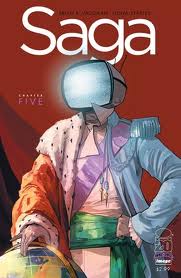 If you are not reading Saga, you are missing out. Plain and simple. Right from the get-go, this series hooks you and leaves you wanting more at the end of each issue. The latest installment, Chapter Five, continues to impress and win the hearts of its readers.

Saga is series that will appeal to those who love sci-fi/fantasy stories. It’s not a superhero book, though there is plenty of action. It goes beyond just telling a story of good and evil. Without giving away too much of the core plot, it has a little bit of a Romeo & Juliet feel to it, but only if the couple lived and had a child and the families were beyond reconciliation. Saga is not merely a love story, though. Politics come into play, war rages across space, and mercenaries are hunting a small child. Vaughan has only shown us the tip of the iceberg, and the good, complicated, twisty parts are yet to come. While issue #5 has not left me with the same feeling the previous four did, it is still a solid comic book.

Vaughan’s writing is only one-half of this book. Staples brings the house down each month with her artwork. Not a single panel is wasted, no emotion spared in the characters’ faces, and her style matches Vaughan’s imagination. This is an unstoppable team, one that deserves your attention.

Buy. Buy right now. Only five issues into this series, so there is still time to catch up. Vaughan has mentioned a sixty-issue series, and I plan on seeing this story to the end. Also, the Letters page is a nice touch to this phenomenal story.