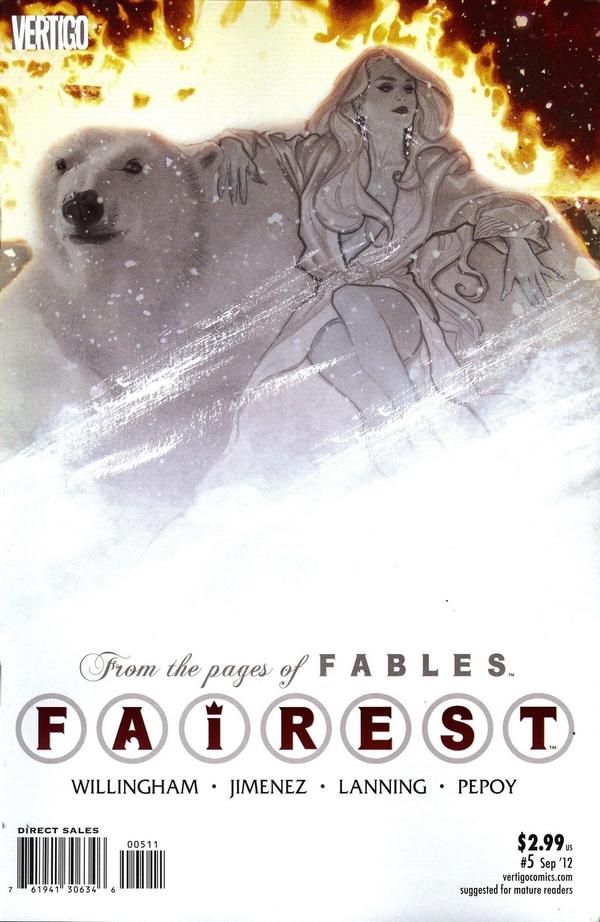 I owe Willingham a lot. I first discovered his writing in a small comic book shop in East Texas in the form of Fables. From his pages, I delved into a world where fairytales had to deal with the mundane. It was a series I recommended to my friends who never read comics, my mother who appreciates a great story, and comic book fans looking for something different on their pull lists. Fairest follows the Fables tradition by shaking up fairytales and seeing what happens.

Issue 5 picks up with Ali Baba and Briar Rose witnessing an epic battle between the Snow Queen and Hadeon. Each woman is a formidable opponent, and the winner cannot be easily determined during the battle. In the meantime, Ali ponders the implications of kissing the Snow Queen before kissing Briar Rose.

While this is primarily an issue that focuses on one major battle, plot points are slipped in. Why did Ali kiss Snow first if True Love is the only thing that can wake Briar Rose? How does Hadeon’s appearance change Briar’s future? What are Jonah’s intentions in this whole matter?

The Snow Queen has some tricks up her sleeve, Briar Rose begins to warm up to the suave Ali Baba, and some pretty important fairy godmothers make an appearance. Jimenez and Sadowski’s artwork is spectacular, and the panel layout during the whole issue is well done.

Fairest has been a strong title since it’s first issue. It’s female focus and Fables history makes it a stellar choice for new and seasoned comic book readers. Added bonus: Adam Hughes’s covers are frame-worthy. Issue 5 is not a great place to jump into this series, but I encourage you to check out the whole series from issue one. This title is sure to have a promising future.