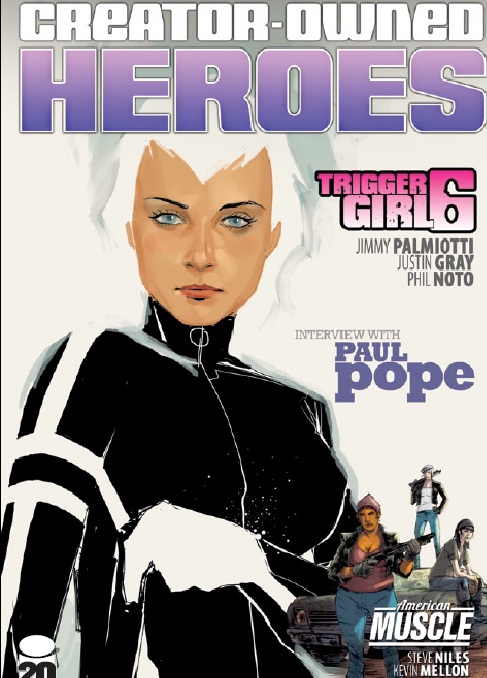 Issue #2 of Creator-Owned Heroes continues the two main stories, Trigger Girl 6 and American Muscle. Trigger Girl 6 is a lab created assassin who seems to be possess all sorts of super powers including, apparently, tricking guard dogs. She’s definitely on a mission for destruction and almost nothing will stop her. This issue we find out her target and that she may have a weakness. Trigger Girl 6 is colorful and fast paced, fun to read but perhaps a tad cliche in the world of cloned super assassins, at this point. That’s a personal opinion, perhaps some love every second of it. I’m not completely uninterested yet, but I would love to see some unexpected twists to take it out of familiar territory in future issues.

American Muscle, on the other hand, has me very intrigued. The artwork is sketchy in a good way, it lends a gritty feel to the story that should be there when exploring a post apocalyptic world. We’ve already met some gooey, icky mutants and this issue reveals that there are thousands of miles of America that the group have yet to search. Maybe it’s that I’m a fan of american muscle cars, maybe it’s that I still find post apocalypse stories exciting, but I can’t wait to see where American Muscle goes next. If I had to put out some criticism, I’d say thus far the dialogue feels a bit immature.

As is the Creator-Owned Heroes way, the reader gets a bonus prize with this issue. An interview with Paul Pope, a gadget review, some insight on the development of censorship in comics and a tip of the hat to the often untold heroes of lettering and design. Amateur creators will be happy to find an advice column from Justin Gray about ‘breaking into’ the comics industry.

My personal favorite of the magazine material in this issue was Jimmy Palmiotti’s column on Kickstarter campaigns and how to make them successful. I’ve helped promote a few Kickstarters in the last year or two for comic industry types and I’ve seen some struggle to the last second and others just blow away all expectations in less than a few days. Jimmy offers some great, useable tips to not only succeed in Kickstarter but to keep your followers coming back for more.

I will say that I found some of the extras to be long winded this time around. I found myself skimming, which isn’t something I’m used to doing in a comic. However, Creator Owned Heroes never claimed to be an regular old comic book, so it’s unfair to judge it that way. The articles do seem to be geared to hit a wide array of reader interests, so perhaps this one just didn’t hit my particular interests as much.

Buy it. Regardless of this issue feeling less appealing to me in some aspects than #1, it’s still a great bang for the buck, with enough varied material that I think most readers will find at least parts of it satisfying. And the variety is really the selling point for this series. No other comic book out there right now offers such a mish mosh of material every month, some of it super fun and informative. Plus, buying Creator-Owned Heroes supports a group of hard working artists and writers directly, benefiting the comics industry as a whole in the end.