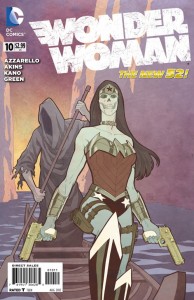 Art by Kano and Tony Atkins

The DC reboot has been a mixed bag for Wonder Woman. On one hand, a fantastic writer and great  art team has changed many people’s perspective of the Amazon. Azzarello has brought Grecian roots back to the series, and a certain refreshing fierceness has returned. That being said, I have had…reservations…about the series in general. Ever since Diana’s father was revealed and the history of the Amazon men was told, I was skeptical of the direction of the story. The shock-and-awe approach to comic books generally do not reel me in, but it seems to move the Wonder Woman plot in a direction that I am starting to like.

In issue ten, we are neck deep in Hell. Diana travels to the Underworld to save Zola, a mortal woman carrying Zeus’ child and Hera’s rage (for the full story, you’ll have to start at issue 1. Thankfully, Vol. 1: The Blood is available for purchase!). The journey in Hell has brought it’s fair share of problems, including shots to the heart, cities made of the dead, and upcoming nuptials  to Hades himself.

Issue 10 starts off with Diana bound and pressured to proclaim her love for Hades, her husband-to-be. The lasso of truth is her only escape, her only way to prove that she is marrying Hades because of love. She pulls a fast one over everyone’s eyes when it is revealed that she loves everyone, even her enemies. When threatened with bondage to Hades forever, she turns into the badass that Azzarello has introduced us to in the beginning of the reboot. Some quick maneuvers and fancy footwork gives Diana the upper hand as she escapes from the Lord of Hell.  The most perfect moment in the first few pages? Diana looks over her shoulder at Hades and says “I won’t be bound in that way to any man…woman…or god”. I want this stitched on a pillow in my living room.

The city of Hell turns on Diana has she rides out of the grasp of Hades. The whole ride is speckled with empowering dialogue about how awesome she is. Nothing can hold her back. She’s like, like…a bat outta hell! Honestly, it gets me fired up.

Diana’s companions eventually join her, but they aren’t in the clear yet. Hell turns into a nightmare as rivers of blood consume Diana & Co. When all seems lost, the last person imaginable steps in. Strife shows a little sisterly love when she rescues Diana from Hades’s clutches. While the help is appreciated, Diana is emphatic in letting others know that she takes full responsibility for her own battles. Wonder Woman has always been a symbol of independence and strength, but she is still just one person. One thing I would like to see more of in her  development in this rebooted volume is acceptance of the role others play in her life. We’ve already witnessed her encounters with family members, other gods, and mortals. Accepting these comrades and allowing them to fight alongside her and share the burden will only result in a stronger, more rounded comic book character. Already the introduction of Zola has brought new dimension to Diana that promises to soften her hard exterior.

Hades has only asked for Diana’s love. The idea of losing his bride brings out the confused child within. He can’t understand how Diana can love him and leave him at the same time. His idea of love is dichotomous with no room for redefining. He lets Diana leave, but the lesson of love has not fully sunk it. This particular lesson needs time to develop and take root in his cold heart.

Issue 10 is a great issue, probably the one issue in this recent arc I actually enjoyed and understood. For new readers, it may be a little challenging to grasp the relationships between the characters. However, the cliffhanger is one that will lead nicely to the next issue. If you are curious about what a typical New 52 Wonder Woman issue will look like, this is a great jumping point to get you settled into the next part of the story. Her passionate speech about love near the end of the issue will warm your toes, if you’re into that kind of thing. While Wonder Woman is not my favorite of the DC titles, Azzarello writes solid pieces each month that are enjoyable to read.