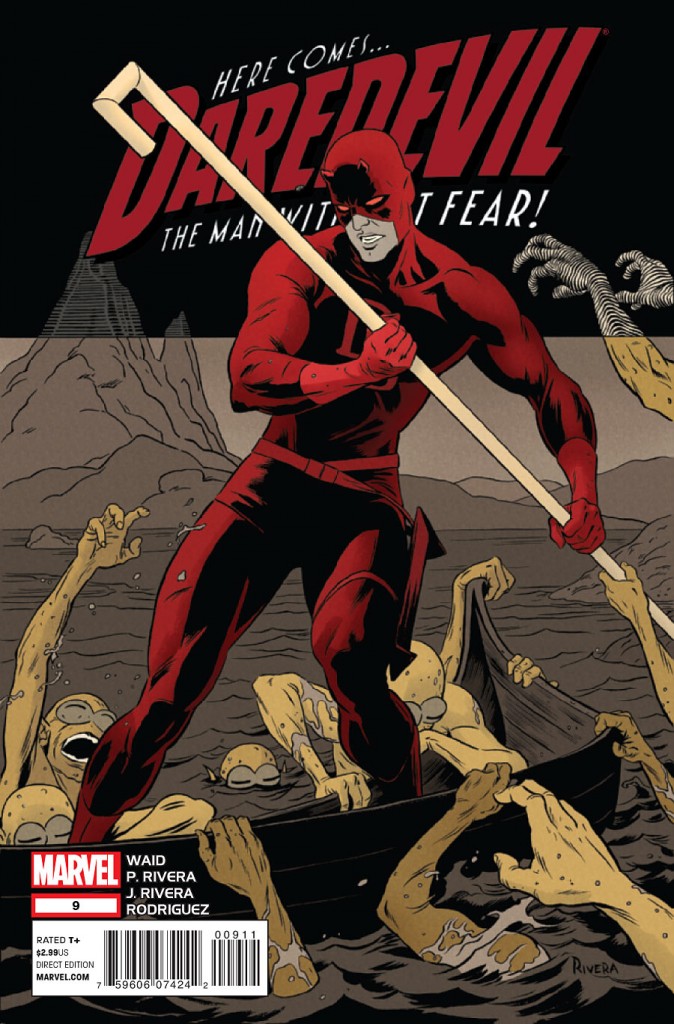 With the conclusion of Mark Waid‘s first arc, Daredevil is now established as a decidedly different personality than fans have seen in the past. Waid has taken the Man Without Fear from many years of darker tales and injected fun, excitement and humor into this new run.  For the first time in a long, long while, fans are being treated to a happier Murdock/Daredevil. There is a reason that this comic has been receiving much critical acclaim, and it is well deserved.

Daredevil #9 kicks off with a little bit of follow-up to the events of the Spider-man/Daredevil cross-over (which took place in Daredevil #8 and The Amazing Spider-man #677). Daredevil and Black Cat have gotten cozy, but she may have ulterior motives. Whether Matt Murdock realizes this and simply ignores it or is “blind” to her charm is up for debate. The espionage tale here is continuing to build to the Omega Effect cross-over coming soon. The majority of this issue, though, follows Matt’s discovery of missing coffins. Perhaps if they were just any graves Daredevil would not be so inclined to investigate, but one of the coffins is his father’s own and so he descends into the darkness below chasing the grave robbers far into the earth. Waid does an excellent job of raising the tension as DD begins to encounter the underground dwellers and pursue them through eerily drawn caves toward their destination. His referencing of classic mythology in lines such as, “Dozens of little Charons, rafting down the river Styx,” complements Paolo Rivera‘s art style perfectly, describing the scene that is taking place. It’s as if Mark Waid writes the comic so that a blind person could visualize completely without even seeing the art.  Without giving too much of the story away, it climaxes with Daredevil’s attempt to confront one of his familiar rogues, and concludes with a fantastic final page that is a classic comic book cliffhanger.

Regarding the art, it has been nothing short of stellar for this entire series and continues to be here in issue #9. Depicting dark cave travels along an underground river could easily become too shadowy, but Rivera is able to capture earth tones and make them colorful in a way that doesn’t overwhelm the reader with darkness yet still accurately illustrates the location. There are several wordless panels that I’d be thrilled to have as stand-alone art pieces on my wall. Daredevil has never looked this good.

Not much! Marvel’s “Daily Bugle” page at the beginning of their comics is a quick snapshot of recent events and offers some entertaining wit. Daredevil #9 is a great place to jump on this amazing series. It is unnecessary to wait for the #10.1 issue coming out in April. You can begin enjoying Daredevil’s adventures right now.

Every issue of Mark Waid’s Daredevil run has satisfied. With the exception of Scott Snyder‘s Batman, I can’t think of another superhero comic that has been this consistently solid. Stop reading this review immediately, don’t even close your browser, and get to your local comic shop and pick up a Daredevil book now. Whether it’s issue #9, #8 or #7, get started and never look back. You can thank me later.