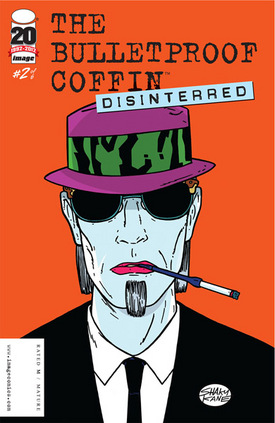 The Bulletproof Coffin: Disinterred is a follow-up to the original series released in 2010. The book follows a former cop turned vigilante “hero” in a crime story with a 1950’s vibe. There is much more than that going on, however, it’s just uncertain what that is at this time. While the primary story revolves around the protagonist becoming the Shield of Justice, there are multiple supernatural characters introduced but with very little development (and incredibly goofy names like Coffin Fly and The Unforgiving Eye). On the surface, Disinterred is extremely adult in nature. The series does not avoid foul language, gore and nudity, but rather embraces them as part of its campy nature.

As for issue #2, specifically, the book uses an interesting technique to introduce (or reintroduce to followers of the originals series) a character that goes by the name Edgar Landru. Landru is currently serving as open mic night host at The Jumping Jive Joint. The story revolves around three mini-tales, told by patrons on the stage. Anyone can tell a story, the only rule being that it must be true. These mini-tales are recited while the main character sits at the bar and drinks. It is not entirely obvious what the point of these stories were other than to pay homage to the perverse style of over-the-top craziness the comic employs. As far as moving the story forward, this issue felt like filler material and did nothing to advance what the reader has learned about what is taking place and the larger unsolved crime looming in the background. For a six-issue mini-series this is quite disappointing as every issue is so critical to forming a complete story.

The original Bulletproof Coffin series created something of a cult following for David Hine and Shaky Kane‘s work. Most original mini-series don’t receive follow-up books, but this one did, so someone out there is reading and enjoying it. The series is not for everyone, though, and many will find it too obnoxious to follow. It definitely has carved out a specific niche on the comic book shelves – for better or worse, it is memorable.

As previously stated, the book is for adults. There are drugs, blood and sex aplenty. Beyond that, the writing is witty enough to notice and the art is fitting for the time period, but nothing unique and mind blowing is taking place here. This is a book aimed at a particular readership.

Flip through this at the store before purchasing. Doing so will give you a good idea about what the artwork is like and the adult themes you will encounter while reading it. It’s difficult to give any book a blanket negative review because inevitably there is someone that will find this entertaining. That someone is not this reviewer, though. If you’re looking for substance, sincerity and deep storytelling, you should look elsewhere.