FacebookTwitterPinterest
I was all ready to write the book off after issue four and if I didn't have such a big weakness for Johns's writing I would have probably done so. Well, this is one instance where addiction pays off because Justice League #5 is the first issue in the series that I've felt truly satisfies. 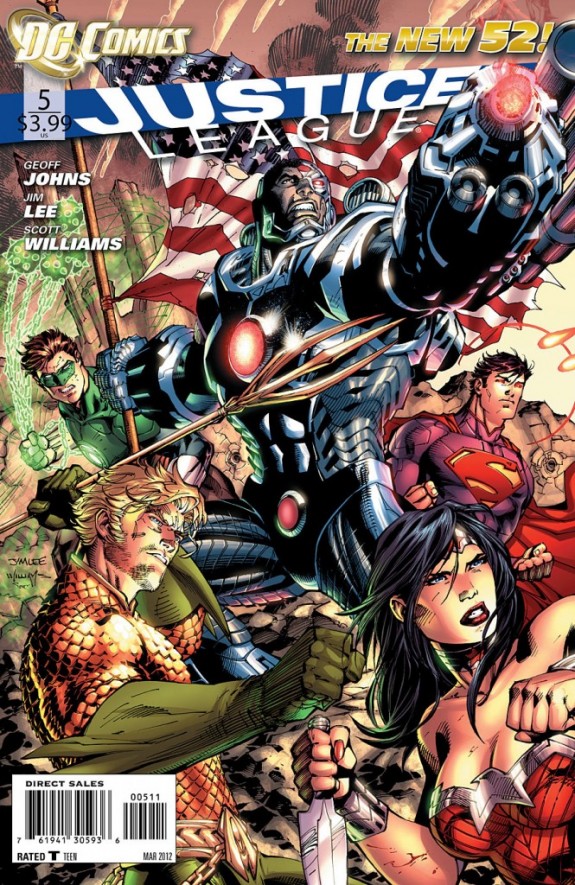 Let’s call a spade a spade; I’ve been very harsh on the DC New 52 Justice League. I do not think I’ve been unfair to the book, but I have been a constant detractor from day one.

I expect a book written by Geoff Johns and Jim Lee to be great and to this point it has been like the comic book equivalent of Megan Fox, beautiful to look at, but without any substance. Each issue, despite high wire visual theatrics, seemed to slog along with only minute narrative movement and character development.

I was all ready to write the book off after issue four and if I didn’t have such a big weakness for Johns’s writing I would have probably done so. Well, this is one instance where addiction pays off because Justice League #5 is the first issue in the series that I’ve felt truly satisfies.

The story of issue five is not a dramatic departure from is predecessors. Our newly formed band of heroes must decipher a way in which to take on Darkseid, the mysterious figure who threatens to destroy the world. That plot, up to this is point has been disappointingly familiar. What works so well here is the realization of the characters. For the first time since the first issue Johns gives his heroes a chance to differentiate themselves by more than just their colors.

It’s good to see The Flash, for the first time in this arc, getting to show off his ability to not just outrun a threat, but to out think a problem. Then, there is the Green Lantern. Johns obviously has a great affection for the character of Hal Jordan and in just a few short pages he shows us why. This Green Lantern might be loud mouthed, but he is also unwaveringly brave. This is something long time comic book readers know, but a factor that has been sorely lacking in the DC New 52 reboot so far.

Speaking of characters who have been lacking, I have found Johns’ treatment of Batman in this run to be downright criminal. His caped crusader was nothing more than a watcher, someone who pipes in with a line here or there, but offers no real benefit to the group. But finally in issue five The Dark Knight has moment in the sun. His conversation with Hal Jordan is the soul of this story and, despite a clunky start it does an excellent job of deepening Bruce Wayne’s character.

Buy It – I don’t think Justice League #5 is perfect, but it hopefully marks the beginning of this book’s ascent into the elite of the DC New 52. Thankfully, Geoff Johns has finally stopped relying on pure theatrics and has begun bring some much needed character context to the new universe. I felt more bravery, danger and excitement in these 22+ pages than I’ve felt in the entirety of the previous four issues. Combine this with Jim Lee’s consistently beautiful art and you have solid recommendation from me and a good omen of things to come.