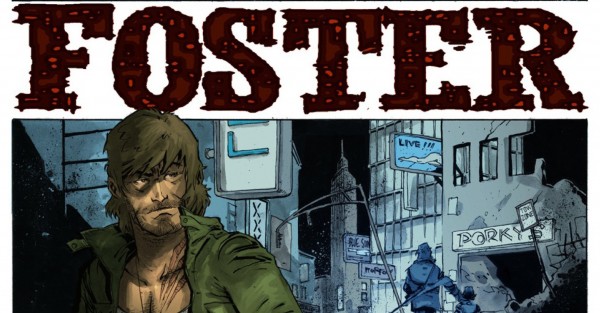 Like most children of the 80’s I grew up watching the movies of Steven Spielberg in an almost religious manner. Even today I realize that his ability to personify real world evils into fantastical manifestations has shaped the way I create and perceive media. I find myself hungering for those stories more and more as I get older and in the last few months have found some of them thriving in the comic book world. Foster #1, the creator owned comic by Flash scribe Brian Buccellato, is one such story. It has lit a spark in me that I’ve only felt when reading the likes of Jeff Lemire’s Sweet Tooth and Scott Snyder’s American Vampire. It’s in one hand a wickedly entertaining genre piece and in the other a deeply personal story of a man fighting demons of both the external and internal kind. Mash this together with an oddly touching “father/son” tale and you have a meal that I will gladly devour every month.

Eddie Foster, a drunk living in a ghetto surrounded by crack heads and dead beat parents, is not a naturally relatable character to me. In fact if the book had simply begun with adult Eddie I might have missed having a real connection with him. Smartly, the creators chose to begin his story at the most relatable time of all; childhood.  By introducing us to Eddie as a scared little boy writer Brian Buccellato has achieved two essential tasks in just a few pages. First is the creation of a sympathetic protagonist and second is the dark truth that monsters, both supernatural and human, exist all around us. With this solid foundation Buccellato is now free to institute the rest of his issue #1 character development through patient and naturalistic means. 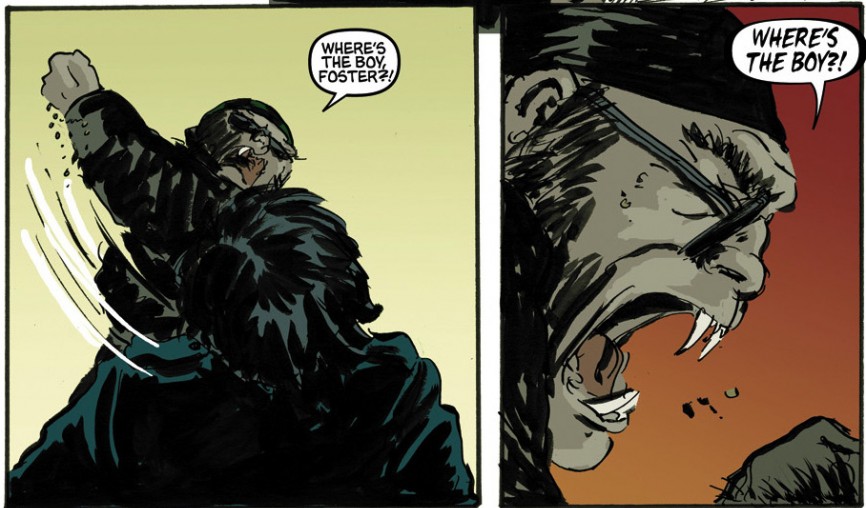 The best of these naturalistic devices is the introduction of Ben. A mirror image of Eddie as a young boy; Ben is the true catalyst for the story here. He brings out the humanity in Foster while also bringing back the very thing that caused him to become the recluse he is. In fact, the scene that caused me to be completely sold on the book is a sequence in which Foster think’s he has put Ben in harms way. It brings adult Eddie the closest to the scared child he was in the opening and it’s the scene that really hammered home the book’s specialness.

The title page of Foster #1 lets us know that this story takes place in a world of the 60’s and 70’s crime films. That theoretically Eddie could be walking the same streets as Dirty Harry or Popeye Doyle. This permeates the narrative in such a way that it becomes a character all it’s own. The world of Eddie Foster feels dangerous and unwelcoming and in turn nails that aesthetic completely. Yet, underneath this gritty cop film effect lies another influence. The gritty urban environments infused with the supernatural feels as much John Carpenter to me as William Friedkin. In fact as Eddie faces down a pack of vicious Dwellers I can almost hear The Thing score booming in the background.

I would also like to point out that Noel Tuazon’s comic strip like art is a perfect fit for the story being told. His color pallet,  especially in the action scenes, is diverse and the the grease pencil look to his lines evoke the shadowy elements of the film influences at work int he narrative.

Buy It – If you are a fan of the work of Jeff Lemire or Scott Snyder  Foster # 1 is a book for you. It has a dedication to honest characters, great genre trappings and excellent tone and the first moment you can get your hands on it  you should be picking it up.

To find out how to when and how you can get your hands on Foster #1 check out Brian Buccellato on Twitter @brianbooch or at http://www.brianbooch.com.