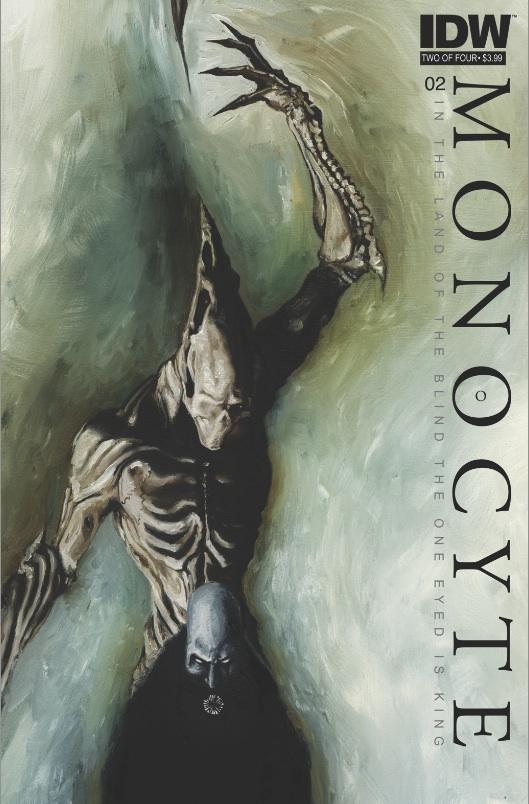 Created and written by Menton3 and Kasra Ghanbari

The war between the Olignostics and the Antedeluvians rages on. The One Eyed skulks the valley of the dead in search of The Conduit; leaving a wake of black blood and tendrils behind him. The more I read Monocyte the more it’s becoming very Shakespearean to me. The language of the book is becoming much easier to digest as I march forward into this dark land with The One Eyed and being a named Grod as my guides. I think perhaps my favorite aspect of this particular issue is the overabundance of sacred geometry used throughout the book. Always aesthetically pleasing, sacred geometry has been an interest of mine for over 10 years now, and to see some of these familiar symbols so expertly used within a comic book, is something I truly dig. I’ve also fallen in love with the design of The One Eyed. His design is almost that of something born from both a massive bird skull coupled with an upright Xenomorph from the ALIEN franchise. He is truly frightening and acts as a sinister freight train of destruction and death inside the lands upon which he treads.

With the discovery of Grod being able to use the dead to increase his power, and an endless ocean of them at his feet, I’m eagerly awaiting his transformation from hopeful savior to unflinching bad ass. It’s my hope that in the coming issues we will see him rise to power, enough to stand even a chance against The One Eyed. Monocyte is still a book that won’t be for every comic reader but holy sh*t if it’s not one fantastic journey. Each and every page is saturated with character, dark beauty, and an elegance that only comes from a project born of true passion.

It Still Depends – Like I’ve said, Monocyte is not for everyone. However, if you’re willing to embrace your dark side and want to perhaps drown yourself in some truly beautiful art and thought provoking narrative and dialogue then I invite you to give this a careful read. It’s intimidating at first, but before long I promise you that the pieces begin to fall into place and you’ll be just fine. I’m hooked.