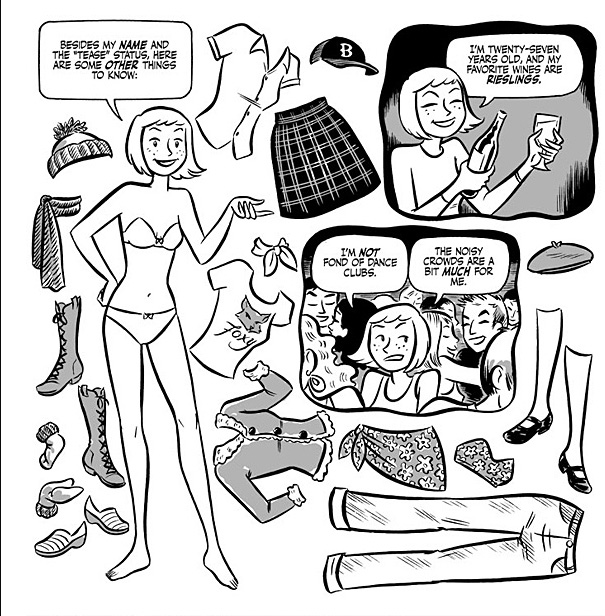 The story follows 26-year Annah Billips, who believes her mad scientist father extracted part of her brain in order to create a sister for Annah named Ginger. No one is entirely sure if she is crazy or if she actually has a sister named Ginger, who is the product of an experiment performed by Annah’s mad-scientist father. The story is told from the perspective of a number of people (and animals) that have encountered Annah and is set during the time of a date Annah has with a former coworker named Chili.

Annah’s story is told from the perspective of an English bulldog, a pigeon, a shoplifter, a fake magician, a store clerk, a man that Annah has dated and from Chili. All these perspectives give us a unique view on Annah and help us determine whether she’s crazy or telling the truth about her sister, Ginger.

Gingerbread Girl is not only written in an extremely interesting and appealing manner, but the illustrations that accompany the story to form the graphic novel are simple and intricate all at the same time. The illustrations have sort of a modern Archie comics feel to them, and yet they are more sophisticated than that. They help tell the story in ways that words can’t. They show us Annah’s life, the divorce of her parents, the creation of Ginger and more.

This story is definitely aimed for a mature audience, as it deals with a lot of sexuality (and bisexuality) and heavy subjects. The story itself isn’t necessarily presented as “heavy” but it is deep and it leaves us thinking about the lives of Annah and Ginger. Is Annah crazy? Does Ginger actually exist? It leaves you guessing and never directly tells you what is going on. A great story should get your mind working and make you ask such questions even after you’ve finished reading the story.

Gingerbread Girl is its own creation.  No previous experience reading comic books is necessary to enjoy this quirky tale.

Definitely worth picking up and enjoying. The art is fun and the story is interesting, unique and keeps you guessing from start to finish.