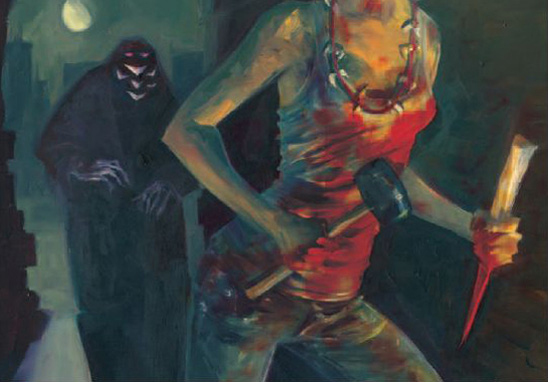 I don’t know about you, but I’ve had many a dream, whether it be day or night, of driving a stake through the Twilight collective for the past several years. The practice of swooning for the vampire rather than fearing it is a trend that has left a permanent black blood stain upon the youth of today. So it’s with pure glee and an invisible megaphone that I celebrate the existence of Done to Death.

Shannon Wade thinks that the vampire genre has been done to death. In charge of slogging through transcript after transcript of post-Twilight drivel, Shannon decides that she’s had enough, and takes it upon herself to dispatch the worst of the worst would-be writers, who threaten to continue the trend of lining our sacred bookshelves with poorly written pussafied-gothic trash. So it’s when Shannon is forced to deal with the vampire literature’s biggest contributor, Shelly Demornay, and a true to life multi-mouthed vampire named Andy, that things take a turn for the bloody.

This book will, most likely, always hold a very special place in my heart. It was almost as if it’s wit and hilarious premise were calling to me from the racks of an underground comic book store I visited, just days ago, inside the East Village of New York City. Andrew Foley tells a near perfect tale of what it’s like to be in on this vampire literature trend from nearly every angle. Each character comes alive with a grand personality, and the grim nature of the book speaks to that part of me that has been waiting for a story like this to come along for what seems like a lifetime, and then some. Fiona Staples breaks the mold with her beautiful art. Aside from fitting the “gothic” criteria that is the norm for these stories, her 1950’s -60’s fashion-esque  drawings drip with personality, giving each character a sinister yet sleek look that stabs your eyes with talent.

Not wanting to ruin the absolutely perfect conclusion to this graphic novel, I can undoubtedly say that this has been the greatest work I’ve picked up in weeks. I urge you all to check this one out. Even if you’re a Twi-hard (groan) it would be hard not to appreciate the hilarious nature of this story. I loved this book so much, seriously, there are no words. Well, apparently there are about 407, but who’s counting?

Know that we are living within a time where vampires are no longer feared. Know that there is something wrong with this fact. Fight the power of Stephanie Meyer and pretend that Shelly is her and have a blast with this book.

Buy it! Really, it will strike a chord with you regardless of your preference in reading material simply based on the fact that this book might actually be considered important and should quite possibly be mandatory reading for tweens everywhere.