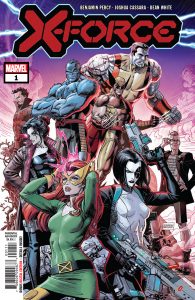 Since its inception X-Force has always been the militant wing of the mutant revolution, often times more in line with Magneto’s train of thought then that of Charles Xavier. Originally formed by Cable from the remnants of the New Mutants X-Force has had a long and storied career through a multitude of iterations. With the Dawn of X upon us it’s time for a new X-Force, a new militant team ready to take the fight to any of the millions of people not thrilled to see the recognition of Krakoa, the new mutant homeland.

X-Force #1 begins with a dark cabal of humans who are disturbed by the world’s willingness to accept the mutant nation of Krakoa and appear to be in a political and finical situation to cause harm to the new nation. We would know for sure but this cabal is hidden behind masks so their identities are not only a mystery to each other but to us the reader as well. Of course Xavier attempts to use one of his luckiest of covert operatives, and an original member of X-Force, to infiltrate the meeting but everyone’s luck runs out eventually. The story quickly jumps to Krakoa and I will say X-Force #1, outside of the Hickman books, does the most world building when it comes to the new mutant nation. Specifically we find out how Krakoa defends itself, as the vegetation is linked to the environment and in turn it is linked to Black Tom Cassidy, the classic X-Men foe. Black Tom uses his ability to manipulate plant life to be the security guard to Krakoa and he takes his job seriously, even if the Krakoan Council doesn’t. The book escalates as an assassination team, who look a lot like the classic cybernetic mutant hating Reavers invade Krakoa and al hell breaks loose. Wolverine is quick to retaliate and it is clear that he will no doubt become the center of this X-Force book just like he was a few years ago during the Remender run. X-Force #1 doesn’t clearly establish who will be a member of X-Force but I will say in the Dawn of X the teams feel very fluid and any mutant could be on any team at any moment. The book does end with a cliffhanger death, but also in the Dawn of X there is no more mutant death as anyone can be resurrected if the Council wants you to be.

X-Force #1 was an interesting read. I can’t say that it sucked me in like some of the other Dawn of X titles have but I am intrigued and I’m a sucker for any X-Force title. With the name X-Force I was expecting a violent story and the issue did not disappoint, especially when the Reavers arrived on Krakoa. Other than his time on Green Arrow I have not read any books by Benjamin Percy but he seems to have a nice grasp of Marvel’s X-Men and actually breathed some new life into Black Tom Cassidy, who’s known for his villainy but has rarely been a sympathetic character. I’ll be interested to see what the core team in X-Force will be, as it looks to be a non-traditional menagerie of mutantdom and it will be interesting to see this team come together. This is my first experience, that I can recall, with the artwork of Joshua Cassara. It is an interesting style that feels like it would be an ideal fit for an Image sci-fi title. Not that I disliked it, it was just a departure from the other Dawn of X titles. I did like the action sequences and with the return of the Reavers the art was reminiscent of the classic outback X-Men years when the Reavers first appeared and were drawn by Image founder Mark Silvestri. X-Force #1 was a good interdiction to this latest iteration of X-Force and I’ll be around for X-Force #2 but with the legacy of this name I do have high expectations of what this title will be.

Verdict: Buy. Anyone interested with the Dawn of X will want to read X-Force #1 as it elaborates on the island nation and sets up for a violent mutant strike force, which is historical core of this title and no doubt what many readers want and expect from a title with this name.