Pencil and Inks by Charlie Adlard 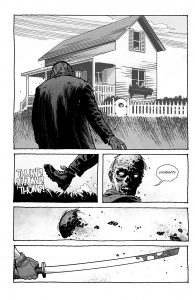 I expect that many of you like me were surprised to find out this past Wednesday that one of the longest/ most prolific indie comics has unceremoniously finished. Kirkman shocked everyone even distributors as he solicited further issues and continuously talked of a 300-issue run. This has meant getting your hands on a physical copy may be difficult, but no matter the circumstances surrounding this final issue, how satisfying an ending is issue 193?

Issue 193 jumps forward roughly twelve years from the events of 191 and 192 where (CAUTION SPOILERS):

Rick was killed and zombified

This issue manages to show how the world has evolved and where all the characters (well most of them) are and doing but in one solid narrative of an older Carl Grimes. Carl is all grown up living with Sophia and he has a daughter called Andrea. The safe zone which the survivors live in is so secure that walkers are rarely seen, to the point that Glenn and Maggie’s child, Hershel has made a business out of showing them off. We find out about Hershel’s endeavour after a walker escapes making its way onto Carl’s property.

This provides the setup for the tale where Carl finds himself in his father’s position over many of the series- standing up against complacency. This narrative thrust entails Carl meeting with most of the main players that are still alive/ around in 191/192, but Kirkman does it all with such ease and finesse it feels natural and heart-warming not stilted or forced. I don’t want to spoil the ending or even the finer details of the issue, as I truly believe this should be read by all even if you have dipped out of the series. All I will say is that whilst some would have probably enjoyed a more bleak ending / which Kirkman said was the initial plan, this ending rings true.

Adlard and Rathburn’s art in this 60-page finale is the excellent level you have come to expect from the Walking Dead. It has two stunning double splash pages- one of a sweeping landscape and one of a more touching moment.

If you have ever picked up an enjoyed a Walking dead issue you should read this issue, Kirkman manages to create a satisfying cap on this behemoth of a comic which is a major feat and it is touching to behold.