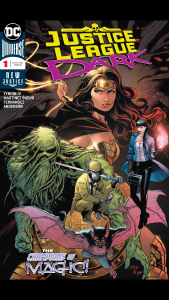 Justice League Dark is James Tynion’s newest monthly book to hit shelves and even with the man’s heavy workload, there is still quality writing throughout this first issue. The story follows Wonder Woman on her quest to assemble a team so that she can prevent magic from destroying itself. Readers also accompany Zatanna while she attends a mystical meeting and confronts The Tree of Wonder.

The art from Martinez Burno and Anderson is clean and well defined. Its able to convey tone and placement as the characters move from place to place as the situations they are in shift from investigative and entertaining to sinister and combative. While I’m missing the traditional Zatanna stage tux the Swamp Thing redesign is working for me.

Tynion is very clearly laying out tensions that run as an undercurrent when the DC mainstream encounters the more mystical aspects of its world. There is a sense of the magical characters of wanting to keep everything in house and away from the heroes that only care about them sometimes. I’m hoping this divide will have its own sort of character arc that will culminate in a conflict of ideologies and less with powers and fists.

The team that Tynion has put together is far from typical. It’s a good mix of the wacky and the mystical ranging from Detective Chimp to Man-bat but the member that stands out is Wonder Woman. She is a well-chosen leader for the team not only because she herself has always encountered and welled magic objects it just so happens she also comes from a mystical place.

Something that might bother a reader is the expository nature of a lot of the dialogue. As a first issue and quasi-spin-of  that event, this is to be expected because there is a lot to catch up on. Couple that with the fact that the new reader is coming into decades-old DC and Vertigo character relationships there is a lot of history that is relevant to the way that they treat one another.

One of the center points of the comic is a summit of the mystics that takes place at Wintersgate Manor. Many well know characters are seen there is one group that goes unrepresented. The characters of the Dream Realm and beyond are no were to be seen.

This is complexly disappointing especially considering Daniel’s recent appearance in Metal and because this book is directly related to those events. On the other hand, if Tynion didn’t have a place for them in this initial arc or doesn’t have a place for them at all it’s probably best that they don’t appear. Granted that doesn’t make it any easier to accept because such a large portion of DCs magical cannon is made up of those characters.  On the more realistic front, it’s likely that these characters have been pulled from the pool of options because the New Sandman book will be hitting the shelves soon enough.

None of that stops the build of tension or seems to hold the book back. There is also an emphasis on the grotesque epically where Langstrom is considered. He himself is now a sort of half bat monster and his work is focused around things that are no prettier. Swamp Thing and Zatanna have a good rapport and are the ones that are given the first insight into what’s going on.

While not the strongest start to a series, especially considering how much history and exposition had to be written through, this book has good characters, lays the groundwork that sets up story and conflicts to come. Verdict, keep an eye on the book and defiantly give it a read.