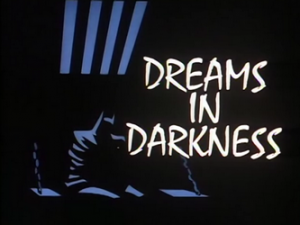 Written by: Judith and Garfield Reeves-Stevens

Synopsis: [From IMDB see: here] While affected by the Scarecrow’s fear toxin, Batman finds himself an inmate of Arkham Asylum.

When re-watching the series entire run, Dreams in Darkness doesn’t necessarily stand as one of the most memorable of Batman: The Animated Series’s output and it is easy to see why. While its opening title card and sequences are somewhat striking, ultimately it is an episode that appears somewhat lost within a sea of cliché, and as such is almost forgotten amongst many of the other episodes in the series, due to their excellent writing and ideas.

Like many great stories, Dreams in Darkness poses a series of questions to the audience. In the opening moments, we see Batman being held within a cell of Arkham Asylum, begging to be let out so that he can save Gotham. Immediately, we begin to ask several questions: Why is Batman being held? What is happening to Gotham City? Do his doctors know who Batman is? Immediately, these questions draw the audience in, and it is an excellent way of seizing the audience’s attention and forcing them to follow you on the episodes journey.

Of course, the conception of Batman being held within the padded cells of Arkham Asylum is not a new one. In Batman: The Last Arkham (Part of the Shadows of the Bat series), Batman commits himself into the dreaded institution to investigate the dealings of Arkham’s administrator Jeremiah Arkham, while co-writer Garfield Reeves-Stevens had previously written a similar story entitled ‘masks’, within the short story collection The Further Adventures of the Joker.  As a result, although the episode begins with an intriguing and particularly engaging set of questions, the episode eventually descends into several clichés and story arcs that have inevitably been seen before.

While Batman’s narration works well as another throwback to the noir films of the 50s, the narrative of which he tells is one that has been seen before. We have the return of the Scarecrow, who in his 3rd appearance has secretly broken out of Arkham and intends to poison Gotham’s water supply with his fear toxin (a possible inspiration for Christopher Nolan’s Batman Begins), as part of large-scale mass experiment in hysteria. When Batman attempts to stop Scarecrow’s henchmen from initially testing his formula, Batman is exposed to the fear toxin. With the only antidote requiring him to take 2-days’ rest, Batman elects against taking himself out of commission, and thus spends most of the episode fighting Scarecrow’s toxin, even crashing his Batmobile on the way to Arkham – an act that eventually leads to his confinement.

While the episode does well by re-introducing the Scarecrow’s scientific motivations, it is a narrative that we have seen many times before, not least in the Scarecrow’s debut episode Nothing to Fear. Although several of the cameo appearances from Robin, the Joker, Two-Face and Poison Ivy are fun, many of the fear sequences have been done before.  Not only this, the episode even ends in a cliché now familiar with most Scarecrow stories; with the Scarecrow being exposed to his own toxin.

Yet, despite these obvious weaknesses, it is difficult to completely dislike Dreams in Darkness. The action sequences are serviceable as are the excellently dark dream sequences, which come complete with a giant gun, complete with blood dribbling from the barrel. Furthermore, as previously stated, the opening scenes are filled with enough intrigue that they keep you watching throughout the episode even when it does descend into potentially boring territory. Hell, there are even some interesting small additions to the story world; including the revelation that the Joker’s alter-ego is that of Jack Napier – the name taken for the character in Tim Burton’s 1989 adaption.

Ultimately, although the episode sadly lacks many memorable moments in its later moments, Dreams in Darkness does enough to keep the audience entertained throughout its run-time. Not only this, it might even be argued that episodes opening sequences of intrigue would further set the scene for one of the series ‘fan-favourite’ episode – Over the Edge, which begins with a similarly confusing situation for the Dark Knight and his allies. Nevertheless, despite a promising and effective start, Dreams in Darkness is an episode which stands within the mid-tier of Batman: The Animated Series’s run. An episode that despite some intriguing moments, is largely forgotten due to some cliched and by-the-numbers storytelling.