Anthony Bourdain co-wrote a horror comic. I will let that sit in. The new horror anthology series, Hungry Ghosts, is the brain child of the celebrity chef and Joel Rose. Artists Alberto Ponticelli and Vanesa Del Rey help out for the art. The basic format is three parts to the issue. Each section is only about 8 pages long. This makes the issue go by much quicker than a comic like Ice Cream Man, which while also an anthology, focuses on one story an issue. 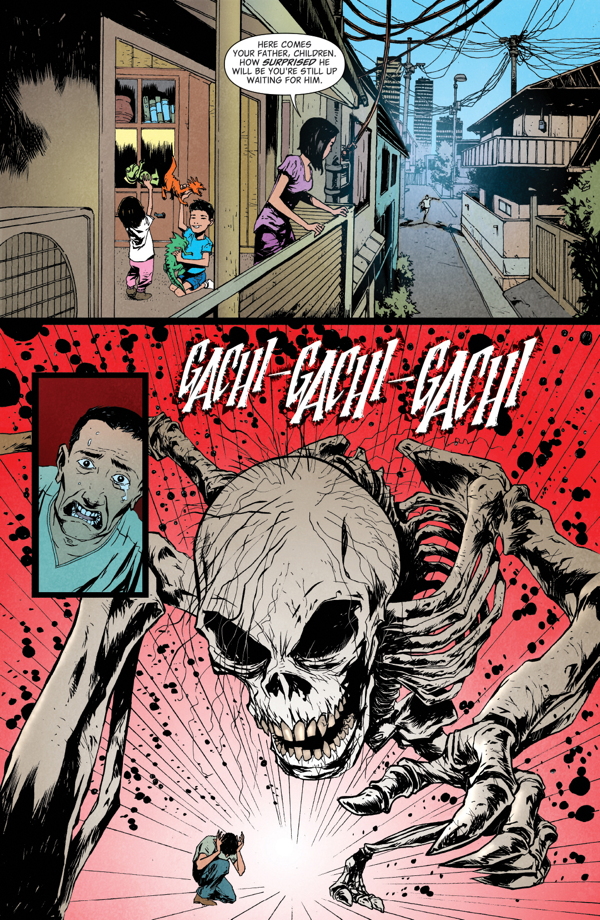 The basic premise is a very rich man with shady connections is hosting a dinner with a large number of other very rich people. The man clearly has never heard of too many cooks in the kitchen, because the kitchen is lousy with famous chefs. Supposedly, the dinner is for a good cause, but they never expound on the nature of the cause. The man says he wants to follow the custom of the Samurai and light one hundred candles. They will then take turns telling ghost stories. The chilling tales have a “food” sub theme, though the food in the second tale would not past the Health Inspector.

Overall, the comic has potential. The tales are diverse, and there is a nice Japanese styling to the art. The problem: the tales are so short, that it is hard to get invested in them. The suspense cannot build, and the final twist comes a minute after you start it. While I have read successful vignettes in comics before, it seems the format does not translate as easily to horror. It could just be the writers, but I have always felt the scariest part of a horror story/movie/comic/novel is right before you see the monster, when it could be anything our wild minds can imagine. The art is good, though. I love the work of Vanesa Del Rey, and I am always happy to see her name on a book, particularly a creepier one.

Verdict: Pass. While I enjoyed portions of the issue, the ghost tales themselves felt predictable. There was no time to play at the terror of the reader, merely one sudden monster appearance and done. While the concept is fun, I think it would have been better suited if it did one tale an issue and took its time to toy with the reader.