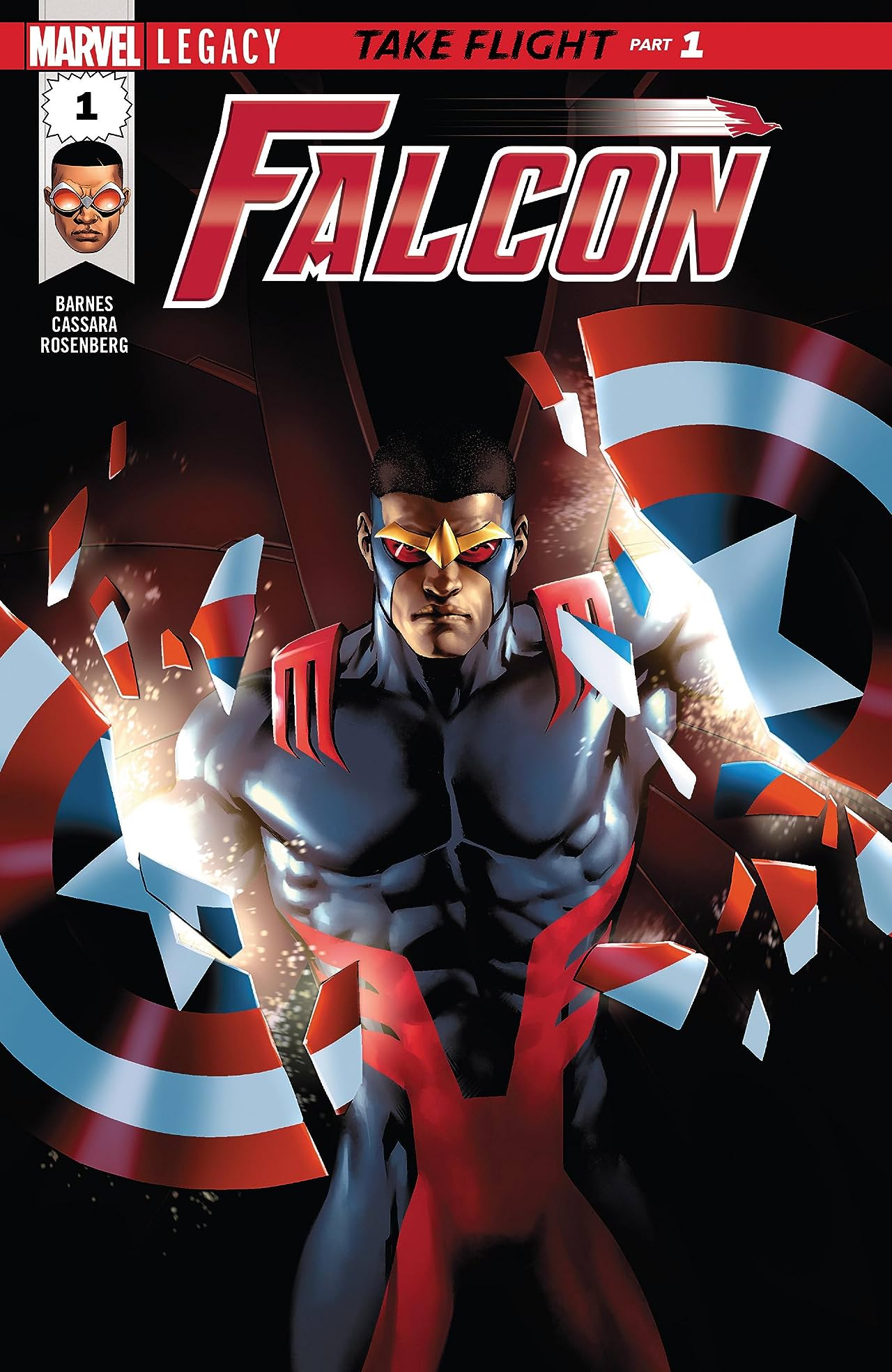 Sam Wilson is the Falcon again, boys and girls, and it feels so good. While I am curious what is going to happen with the interim Falcon, Jouquin Torres (are we pulling a Hawkeye?), I am glad Sam is back with his original name. While I enjoyed Sam as Captain America, he never seemed to achieve his true potential and half the issues felt like place holders with no real purpose. The D-Man issue felt like 15 minutes I would never get back.

The heart of the problem with Sam Cap was the fact the book never seemed to know what it wanted to be. It would bounce from political/social issues, to light Cap adventures (CAP WOLF!!!), to random one and done’s. These events felt like they were keeping Falcon in Limbo, with no real long term commitment. With Sam back as Falcon in this first issue, he has found his stride.

Falcon is doing some soul searching after Secret Empire, and he has decided he needs to get back to the basics. Leave the aliens and demi-gods to the Avengers. Someone needs to mind the streets. So Sam is off to Chicago, with his new protegee Patriot in tow, to stop gang violence by making the two biggest gangs call a truce. Since this is the first issue of the arc, you can imagine how well that goes. That being said, it’s nice to see Sam be unapologetic in handling social issues.

Before, in Captain America: Sam Wilson, it felt like Marvel was scared to actually tell that story all the way, but here, we have a Luke Cage style story, where the hero is on the street trying to make a difference. He isn’t afraid to talk about socio-economic issues or political realities, and it feels very natural for the character to go this direction. 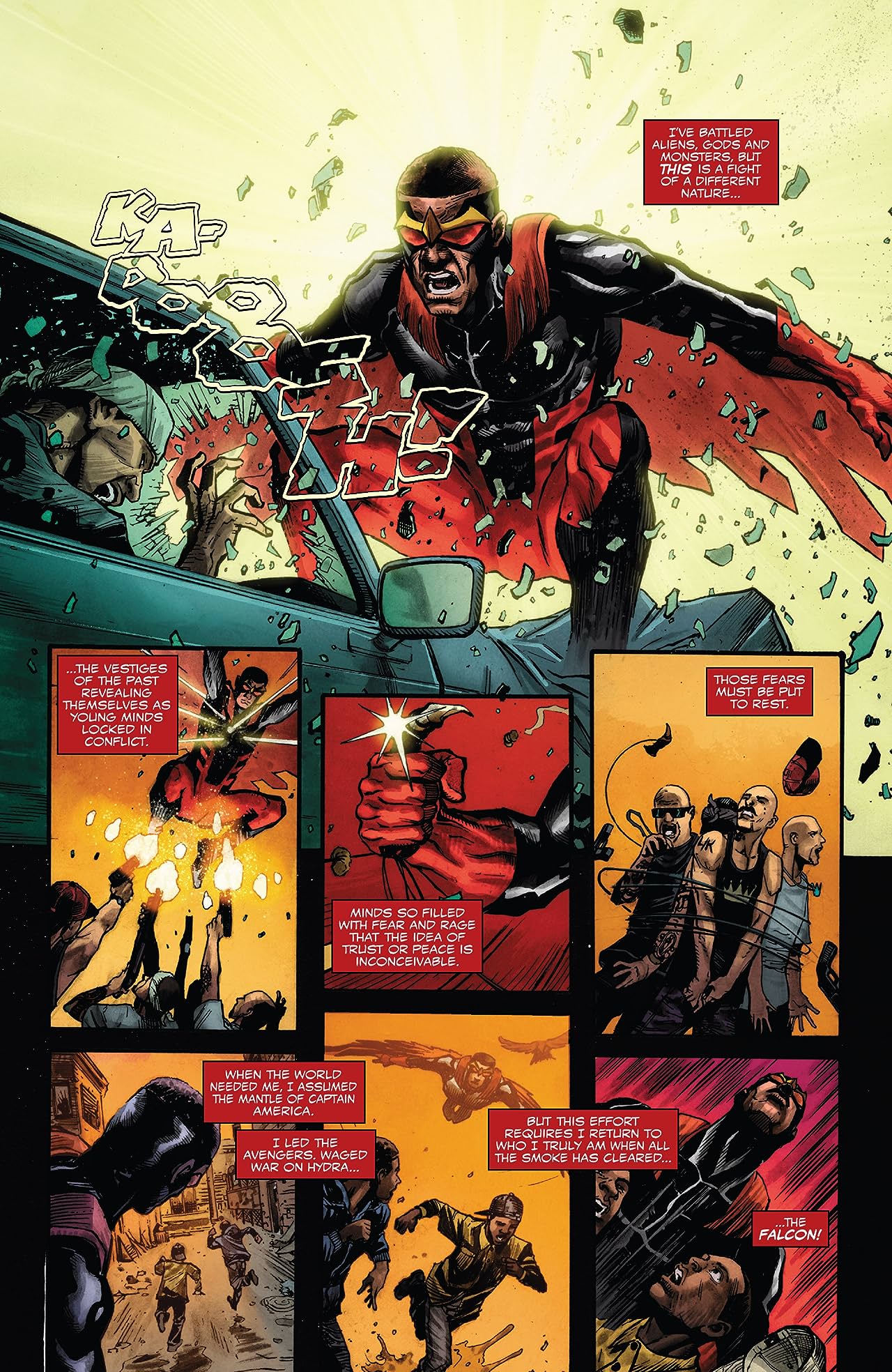 Rodney Barnes, a writer attached to The Boondocks and Everybody Hates Chris, does a phenomenal job with Falcon. The writing is superb. The characters, tone, and direction are clearly defined from the beginning, and the story went from a book that could have just been a bookend to Sam Wilson’s Captain America career to being a singular unique tale that deserves to be told.

While the story recognizes the heavy subjects that lead to gangs and violence, it also recognizes the hope for the violence to end. The duo end up going to a Prodigy Tribute show to celebrate getting the meeting together, and you can tell that the show is the life they love and are fighting for, and you want Falcon and Patriot to succeed in their mission. The art is gritty as Chicago, with hard lines, and a lot of darkness. The artist does a good job of putting detail on the splashy panels, while using a dark lack of contrast to the smaller shots.

Verdict: BUY! I admit that I wasn’t sure we really needed a Falcon comic after CA:SW, but this story definitely needs told. While some might complain about Social Justice Warriors or whatever, the comic is doing one of the things that comics are great at doing: giving perspective to real life issues. Going back to Cap becoming Nomad after the original Secret Empire, comics have taken the time to actually relate to what’s going on in the world, and more often than not, the stories are richer for it. I can’t wait to see where Barnes takes Falcon, and I am curious how they will work the story with the last page reveal. I would be apprehensive if this story was any less quality, but with how much purpose is in this issue, I think we are in for a hell of a ride.